For decades tourists have extended their stay in Thailand by "visa runs" but latest crackdown may change this...or maybe not. 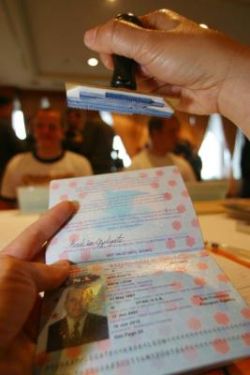 Man on visa run gets passport stamped for another 30 days of living in Thailand.

For decades tourists have extended their stay in Thailand by so-called "visa runs."

One kind of "visa run" is when a tourist exits Thailand at a border checkpoint and then re-enters Thailand without a new visa to stay in Thailand for another 30 days.

When people travel to a nearby country to get a tourist visa to extend their stay for another two to three months, this is also commonly called a "visa run."

Tourists typically travel to border towns such as Aranyapratet on the Cambodian border, Nongkhai on the Lao border, Mae Sai or Mae Sot on the Burma border or to Penang near Malaysia's border do visa runs.

Visa runs can also be a fun excuse for another trip, another party or meeting new friends during the long bus ride to the border.

Visa runs may be a unique part (or even tradition) of Thailand's tourism scene.

Just walk down the street in any major tourism center such as Pattaya, Phuket, Koh Samui or Chiang Mai and one can easily spot signs advertising visa run trips by bus or van.

Another staple of Thai tourism is the visa run crackdown.

Immigration authorities often change their policy on visa runs and rules on who can get what kinds of visas where, such as at the different consulates in Vientienne, Laos or Penang, Malaysia.

These changes are usually not announced officially and are a surprise to tourists who have to rely on updates at Thaivisa.com to get reports from other tourists doing visa runs.

Temporary "crackdowns" to get tough and enforce some law or regulation are common, but enforcement usually only happens for only a few weeks or so until the situation slips back to normal.

For example, immediately after the 2014 coup there was a crackdown and ban on visa runs (see here).

In the past, during the occasional border warfare between Thailand and Burma, the Mae Sai border checkpoint in Chiang Rai was closed and tourists had to go to Nong Khai to do a visa run. 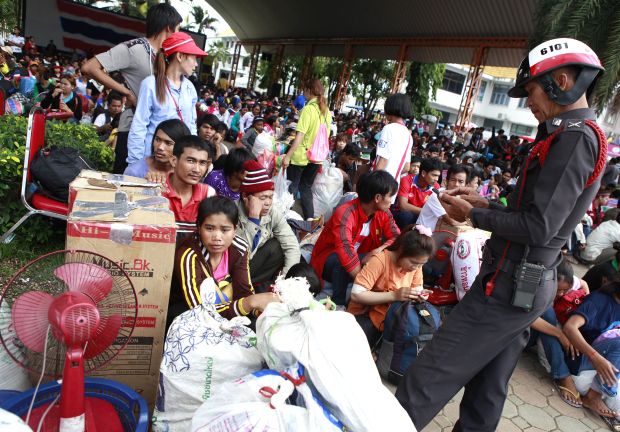 BANGKOK BOMBER DID VISA RUNS TOO?

The first suspect charged in the Bangkok bombings, Adem Karadag, allegedly paid 21,000 baht to do his visa runs at the Aranyaprathet border checkpoint.

There has been no explanation why he would have had to pay so much when ordinary people pay a few hundred baht and no one knew he had any connection to the Bangkok bombing at that time.

This has apparently motivated national police chief Police General Somyot Poompunmuang to wage a one-man war against the Immigration Police before he retires on Sept 30, including a crackdown on visa runs for everyone, including ordinary tourists and teachers as well as terrorists.

"Would he have blown the whistle about the alleged widespread abuses in the Immigration Police Bureau if there were no blasts at the Erawan shrine and Sathorn pier which killed 20 Thais and foreign tourists and injured 130 others?

He has known all along what has been going on at the Immigration Police Bureau, from the inside out. Then why the rhetoric now against the bureau when he has just two weeks left in office, and why does he have to seek the hand of Prime Minister Prayut Chan-o-cha to do the clean-up job for him?"

"In the past five years, Jon has travelled in and out of Thailand more than 60 times, using up four passports in the process. His travels have included short trips to neighbouring countries, including Singapore and Cambodia, and some summer breaks at home in the United Kingdom. Most of his trips were merely a walk out and walk in at the border, commonly known as a visa run among the thousands of expats living in Thailand without proper work or residency permits.

"The school that hired Jon to teach English does not provide him with a work permit, meaning he must rely on monthly visa runs to continue his stay in the country he now considers home.

"I have been employed full-time by a private language school, but I have never obtained a work permit," he said. "The school says the cost [of obtaining a permit] is high and it will be an investment risk on their part to provide paperwork for us when there is such a high turnover of English-language teachers in Thailand.”

"Until recently, Jon had no problems making repeated visa runs. With as little as 3,000 baht in his pocket, he could take a van from the On Nut area to the border province of Sa Kaeo. From there, he could cross into Cambodia’s Poi Pet province, spend some time scouring the veritable sea of second-hand goods at Rong Kluea market, before walking back to Thailand and getting an extension of his tourist visa for another 30 days.

"But last week, after a two-week stay in Singapore, Jon’s passport came under close scrutiny. After landing at Don Mueang airport, he, along with 12 other people, were taken aside by immigration officers who were concerned by the number of entry stamps inside their passports.

"In the end, Jon was allowed to enter. But in the future, he is unlikely to be so lucky..." 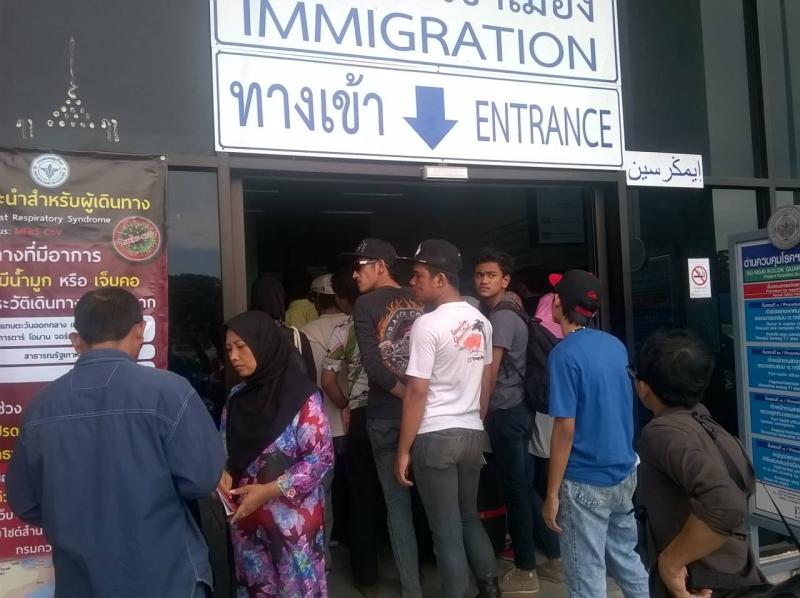 People waiting to be processed at an immigration checkpoint.