Crown Prince to lead "Bike for Dad" on Dec 11

HRH the Crown Prince to lead 29-km Bike for Dad on Dec 11 to mark King's 88th birthday, reportedly passing by Ratchaprasong intersection to show Thailand is back to normal & ready for tourists after Erawan shrine bombing.

Crown Prince to lead "Bike for Dad" on Dec 11

His Royal Highness Crown Prince Maha Vajiralongkorn will again lead the Thai people, both inside the country and abroad, on a 29-kilometre cycling trip, called "Bike for Dad", on Dec 11 to mark His Majesty the King's 88th birthday, which falls on Dec 5.

Suriyan Sujaritpolawong, an adviser to the organising committee, said the event will be held on Dec 11, starting at 3pm.

He expected Thai people in every province as well as those living in other countries to send cyclists to represent them in the event, which will be run under the motto: "United Thailand, Bike for Dad."

The event will show the world that the Thai people, regardless of where they stay, are united under the same king, Mr Suriyan said.

A website, www.bikefordad2015.com has been established but is currently under construction. For now, those needing more information can phone 1122.

Mr Suriyan, who showed the official seal (emblem, logo) of the event, said the Royal Plaza will be both the start and the finish of this cycling event to mark this very special occasion.

However, the exact cycling route is still being finalised and it has yet to be royally approved by the Crown Prince, he said.

He said only that the route would run through Ratchadamnern Avenue, passing Yaowarat and the Ratchaprasong intersection, and across the Pin Klao bridge to the Thon Buri side of the capital city.

The total distance will be 29 kilometres.

Observers said the intention for cyclists to pedal past the Ratchaprasong intersection is to show the world that the situation in the country has returned to normal and is now ready for tourists to visit after the Erawan shrine bombing which caused 20 deaths and scores of injuries.

On Aug 16, the Crown Prince led the Thai people in a 43km "Bike for Mom" cycling event in Bangkok (photo below) to mark Her Majesty the Queen's 83rd birthday, on Aug 12. 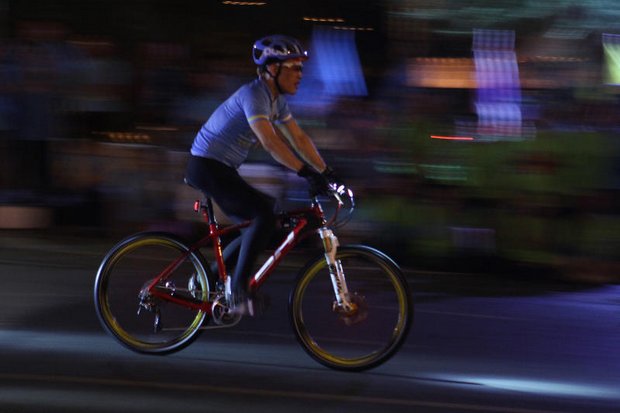