Marks are seen on the leg of a German tourist who was killed by a box jellyfish sting on Koh Samui in Surat Thani on Tuesday night. SUPAPONG CHAOLAN

A 20-year-old German woman died and her friend was injured after they were stung by box jellyfish while swimming at a beach on Koh Samui in Surat Thani on Tuesday night, police said yesterday.

A 20-year-old German woman died and her friend was injured after they were stung by box jellyfish while swimming at a beach on Koh Samui in Surat Thani on Tuesday night, police said yesterday.

Saskia Thies and her friend Giovana Rassi, also 20, were taken to Bangkok Samui Hospital after receiving first aid for the jellyfish attack. Thies succumbed to her injuries hours later.

It was the second deadly box jellyfish attack in Surat Thani this year.

Chayanan Surin, a 31-year-old woman from Bangkok, was stung and killed by a box jellyfish while swimming in the ocean at night during a full moon party on Koh Phangan in Surat Thani in early August.

According to police, the latest box jellyfish attack took place about 8pm on Tuesday when the two women went swimming at Lamai beach in tambon Mared.

Staff of the resort where they stayed heard loud screams from the beach and rushed to find the tourists who had suffered stings on their bodies. They called an ambulance and gave first aid to the victims by pouring vinegar onto the wounds. 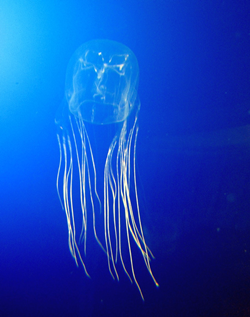 Meanwhile, a leading scientist has urged authorities to install submerged nets for protection against box jellyfish and to place warning signs on all beaches where it is reported that people have been stung by the deadly creatures.

Dr Charassri Angtanya, a fishery biologist at the Marine and Coastal Resources Research and Development Institute in Bangkok, also urged officials to supply bottles of vinegar for emergency use when first aid treatment is needed for swimmers who come into contact with the jellyfish.

Dr Charassri said there were 36 species of box jellyfish known around the world, of which some were poisonous and some were not. A study found certain species could produce venom more powerful than that of a cobra and could kill a person in between two and 15 minutes.

Dr Charassri said those giving help to people stung by box jellyfish would see whip-like marks on the person’s skin. After rescuing the injured person from the water, the rescuers must tell the person to stay still to prevent the venom from spreading and quickly get someone to call the 1669 medical emergency hotline. They should then flood the area with vinegar for at least 30 seconds.

They initially agreed to ask business operators to keep vinegar ready for use and ask health officials to provide first-aid training for box jellyfish attacks to hotel staff.

Mr Paiboon said operators would also be asked to install stinger nets to prevent box jellyfish from entering enclosures and advise tourists to swim inside the enclosures only.

Jet Ski club president Withaya Suksom said yesterday he was alerted to a large number of box jellyfish near Lamai beach by club members on Tuesday and asked marine police and jet skiers to warn tourists to stay out of the sea.

He said he would ask resort and hotel operators to put up warning signs on beaches and advise tourists not to swim in the sea during this period as a precaution.

Since January this year, 12 people have been stung by jellyfish – four Thais and eight foreigners – while holidaying on Koh Samui.

Sophon Mekthon, chief of the Disease Control Department, said more than 900 tourists, both Thais and foreigners, have sought treatment for jellyfish stings over the past 15 years while swimming in the Gulf of Thailand and the Andaman Sea.

Of them, 12 suffered fatal stings.

If a sting occurs, pouring vinegar on the area can deactivate the stinging cells, called nematocysts, and the victim's skin should not be rubbed.

Soda water can be used if vinegar is not available, but it is less effective, he said.