Thailand's players celebrate after scoring their third goal during a World Cup 2018 qualifier between Vietnam and Thailand on October 1 3, 2015 at Hanoi's My Dinh stadium. Thailand defeated Vietnam 3-0. AFP photos by Hoang Dinh Nam

Goals by Kroekrit and Theerathon sandwiched an own-goal by the home team and gave Kiatisak Senamuang's men a comfortable 3-0 win over Vietnam top go five points clear in their group.

Hanoi: Turmoil in the country's football governing body did little to dampen the spirits of the Thai national team as they carved out an impressive 3-0 win over Vietnam to improve their chances of sailing through their World Cup qualifying campaign.

Goals by Kroekrit Taweekarn and Theerathon Bunmathan sandwiched an own-goal by the home team and gave Kiatisak Senamuang's men a comfortable win. 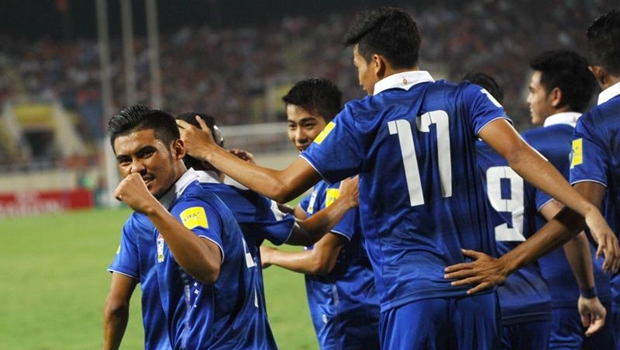 The victory bolstered the Thais' position at the top of the Asian World Cup qualifying Group F standings.

They now have 10 points from four games and enjoy a five-point advantage over second-placed Iraq, who have a match in hand.

Vietnam stayed put in third place with four points from as many matches. Taiwan, the other team in the group, are still looking for their first point.

The heavy loss dashed Vietnamese hopes of staking a claim for first place in the group and left them with only a hypothetical chance of making it to the final stage of Asia's final qualifying round for the 2018 World Cup.

Winners of the eight groups and four best second-placed teams will compete in the continent's final qualifying tournament for places at Russia 2018.

The sight of a large Cheer Thai Power group inside My Dinh Stadium gave the national team a force to counter the vociferous Vietnamese crowd in the stands and a much-needed lift in morale. 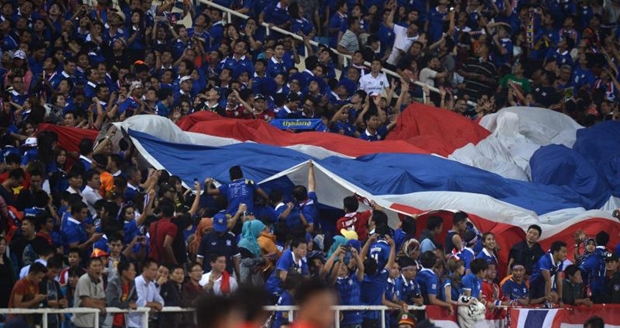 Thai fans unfold a large national flag after their team scored a goal.

Thailand entered the match with Kawin Thamsatchanan returning as goalkeeper and Teerasil Dangda, once again, assuming the role of striker.

The Vietnamese started off in an attacking frame of mind. After a cautious start, the Thai players dug in their heels and began giving their rivals a run for their money.

The Vietnamese looked ominous on the counter-attack and their repeated forays into the Thai half put the visitors under pressure.

Thailand's first goal in the 28th minute was the result of a spectacular long drive by Kroekrit Taweekarn from outside the box.

Picking up a pass from Teerasil on the left flank, Kroekrit shuffled a few steps and unleashed a left-footed sizzler that sailed between two Vietnam defenders past a diving Tran Nguyen Manh into the net.

After conceding the goal, the hosts went all out in search of an equaliser but their efforts were either thwarted by the strong Thai defence or they simply shot wide from long distances. 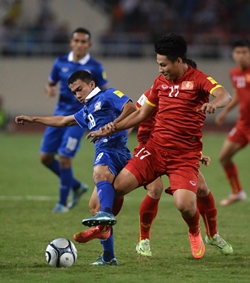 The Vietnamese came back for the second half with a renewed vigour but the Thai defenders held their fort well.

Kroekrit had a big hand in helping the Thais double their lead in the 56th minute when his through ball was deflected by Vietnamese defender Dinh Tien Thanh into his own net.

With their enthusiasm deflated, the Vietnamese made some halfhearted attacking forays which the Thai defenders warded off with ease.

In the 70th minute, Thailand netted their third when Buriram defender Theerathon beat an offside trap and his blistering shot left the goalkeeper with no chance of a save.

The Thais played in a relaxed manner and Teerasil was denied a chance to put his name on the scoresheet by the Vietnamese defenders.

Thailand will next host Taiwan on Nov 12 and then go to Iraq on March 24.

Iraq will travel to Taiwan on Nov 17 and, after their game against Thailand, will host Vietnam on March 29.