Man walking down street gets surprise punch in the face from a man complete stranger. The fight is over in about 30 seconds and the attacker then walks off towards another man and threatens to hit him.

A man gets a surprise punch in the face from a stranger. He fights back. Was that the right thing to do? Watch the video and decide for yourself.

A man who beat a stranger to a bloody pulp on a roadside in Bangkok tried to start another fight with another person only seconds later.

The vicious assault happened on Tuesday morning in Lat Phrao district and was captured by surveillance cameras.


In the footage, the first victim receives a surprise punch to the head from a man in a long sleeve shirt walking towards him. The victim fights back and both tumble onto the road but the instigator has the upper hand. 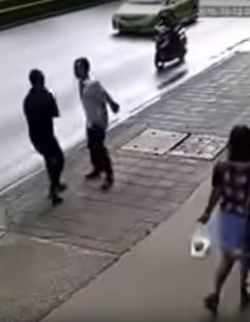 Attacker tries to attack another man, after attacking the first man.

The fight is over in about 30 seconds and the attacker then walks off towards another man and threatens to hit him. The new victim quickly retreats and the thug walks on without pausing or looking back.

However, passers-by and motorists did nothing to stop the fight.

Pannapat Wonjirametha, the person who uploaded the video online, said the man who was assaulted worked as a messenger for his company and had never met his assailant before.

Police said the man in the long-sleeves was probably mentally unstable. People living in the area did not recognise him.

WOULD YOU FIGHT BACK OR RUN?

If you were the stranger and got punched in the face, would you fight back or run?

What would be gained by fighting back?

What would be gained by running away to safety?

Looking at the video again, is there a moment when the victim had an opportunity to run away?