Death toll at 16 as Koppu continues to cause heavy rain (Updated Tues.)

As of Tuesday morning, Koppu is no longer a typhoon, but the slow-moving storm is still dropping heavy rain, over 500ml in some places. The death toll has risen to at least 16.

You can watch the progress of Typhoon Koppu (known as 'Lando' in the Philippines) through regularly updated images from the Japanese weather satellite Himawari 8 provided by the Thai Meteorological Department http://www.sattmet.tmd.go.th/newversion/mergesat.html.

You can also see a wider range of images from the Japanese meteorological service at http://www.jma.go.jp/en/gms/index.html?area=1&element=0&mode=UTC. (The NW quadrant map clearly shows Typhoon Kuppu). Notice that you can put all the maps in motion through animation.

In this 9am Tuesday image from the Japanese weather satellite Himawari 8, Koppu has clearly lost much of its organisation and wind strength, but it is still causing very heavy rain. Meanwhile Typhoon Champi is still a major storm but is thankfully staying away from major land areas. 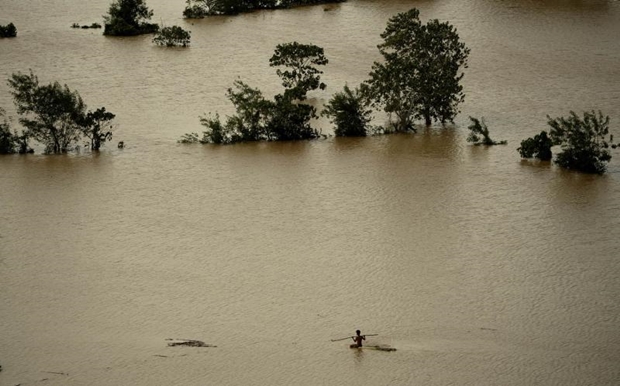 A man paddles a makeshift raft made from banana trunks over a flooded rice field at Barangay Camanutan, Isabela province, north of Manila on October 19, 2015. AFP PHOTO

Koppu is now below typhoon strength but torrential rains continue over large areas of the northern Philippines. The mountain tourist centre of Baguio has reportedly received over 500ml of rain in the last two days. The rains are predicted to continue for at least two more days, making Koppu one of the most destructive storms ever to hit the Philippines. The death toll stands at 16 and more than 60,000 have been evacuated.

MANILA — The death toll from typhoon Koppu in the Philippines rose to 14, officials said Monday, as emergency teams rescued victims stranded by floods and began clearing areas damaged by the storm.

In the biggest loss of life reported from a single incident, seven people drowned when a motorboat capsized in choppy seas off Iloilo City, 460 kilometres south of Manila, the coastguard said.

The boat had just left port on Sunday when it was battered by huge waves and strong winds. Thirty-two people were rescued, but two were still missing. 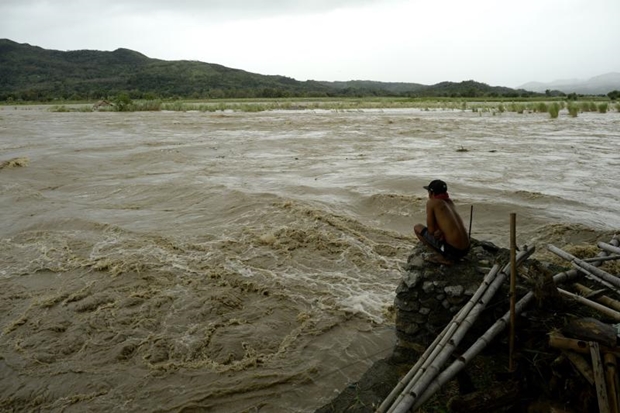 A man looks at the rising water level of the Magat River caused by continuous rains of Typhoon Koppu at Bayombong, Nueva Viscaya, on October 18, 2015. Powerful Typhoon Koppu wrecked houses, tore down trees and unleashed landslides and floods, forcing thousands to flee as it pummelled the northern Philippines Sunday, officials said. AFP PHOTO

Manila, Oct 18, 2015, AFP – A teenager was crushed to death as powerful Typhoon Koppu tore down trees and houses and unleashed landslides and floods across a wide area of the Philippines on Sunday, forcing thousands to flee.

At least eight other people have been reported missing and military and volunteer rescue teams were dispatched to the rice-farming province of Nueva Ecija where rivers burst their banks and flooded several villages, authorities said.

"People are asking for help because the floodwaters are rising. The rescuers cannot penetrate the area as of now," Nigel Lontoc, the assistant civil defence chief for the region, told AFP.

ABS-CBN network showed a photograph of blue-clad police holding onto a rope and wading in chest-deep floodwaters to rescue trapped residents.

The government said more than 23,000 people had already been evacuated from the path of Koppu, which also disrupted ferry services and aviation. 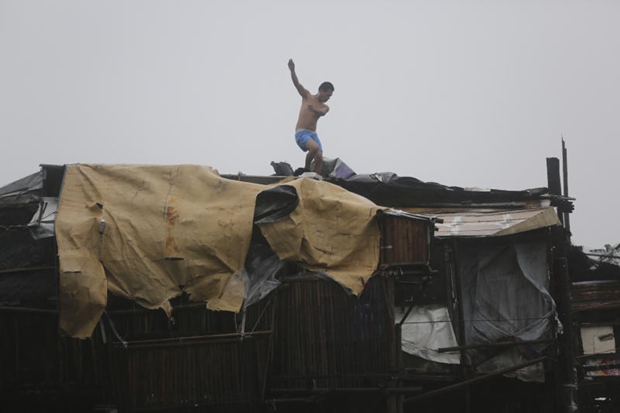 A man is thrown off balance as strong winds caused by Typhoon Koppu blow while he tries to reinforce the roof of his house at the coastal town of Navotas, north of Manila, Philippines Sunday, Oct. 18, 2015. (AP Photo/Aaron Favila)

Koppu made landfall before dawn on the remote fishing town of Casiguran, whipping the coast with gusts of up to 210 kilometres (130 miles) an hour for nearly seven hours before moving inland.

"Koppu tore off roofs of homes made of light materials. Rivers overflowed, and the roads to the area are blocked by downed power pylons and trees," Lontoc said.

It later crossed over the Pantabangan Dam in the southern foothills of the Cordillera, the country's largest mountain range, with gusts of 185 kilometres an hour.

A big tree toppled and crushed a house in Manila, killing a 14-year-old boy and injuring four other people, Alexander Pama, head of the National Disaster Risk Reduction Council, told reporters in Manila.

Officials said more people are expected to flee as the now weakened storm makes its way to the northern tip of Luzon, the Asian country's largest island and home to about half its national population of 100 million people.

The authorities warned heavy rains could still trigger flash floods and landslides in the Cordillera, known for its spectacular rice terraces carved on the slopes of towering mountains. 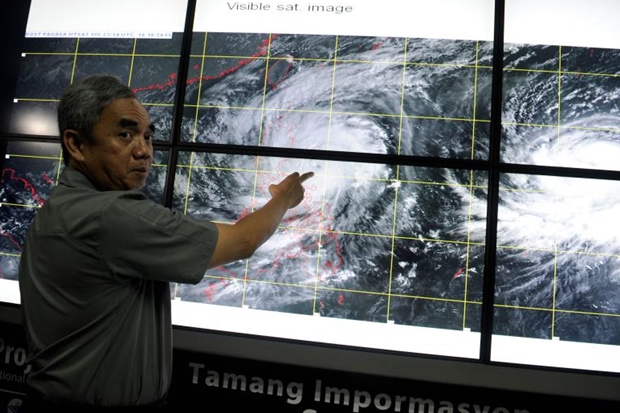 No casualties have been reported but about 6,500 people were evacuated from their homes and taken to safer ground, and the number was expected to rise as the storm slowly grinds inland across the main island of Luzon, the civil defence office said.

Koppu pounded the remote coastal town of Casiguran with gusts up to 210 kilometres (130 miles) an hour and heavy rain, remaining nearly stationary hours after making landfall there before dawn, the state weather service said.

"It looks likely this deluge will be with us for days," weather forecaster Gladys Saludes told AFP, adding the typhoon was not likely to leave Luzon until Tuesday.

He said ferry services across the island, home to about half the Asian archipelago's population of 100 million people, were suspended amid rough seas while commercial aviation was also disrupted with 30 flights suspended, two of them on international routes.

Pama said communications links had also been cut in many of the affected areas, while the authorities were working to evacuate more people deemed at risk and trying to clear blocked roads so aid could get through.

"I must emphasise that this is just the start. People must remain alert while we try to pick up the pieces in areas already hit," Pama added.

Residents of communities in the typhoon's expected path were hunkering down under darkening skies, said Kate Marshall, part of an advance reconnaissance team of the International Committee of the Red Cross to the region.

The weather service has also warned of storm surges, massive typhoon-generated waves smashing along coastal areas, but Saludes said there had been no reports of these so far.

Although the storm will not directly hit the capital, Manila, the weather service said it would affect a 600-kilometre swathe so that other regions were likely to be affected by strong winds and rain.

The Philippines is hit by an average of 20 storms each year, many of them deadly.