As evidence of their alleged extortion, police displayed valuables including guns, luxury watches, ceramic dolls, Buddha images, gems and even expensive guitars confiscated from the suspects, some of which had previously been seized from former Central Investigation Bureau (CIB) chief Pongpat Chayapan's network. PATIPAT JANTHONG

Police have explained in detail how the three suspects arrested recently on lese majeste charges allegedly tried to enrich themselves by citing the monarchy to gain funding from business operators.

Citing the monarchy to extort business operators is a key point of the ongoing probe into lese majeste allegations against two detained suspects and another who is deceased.

Police have compiled a total of 13 cases in the probe against Suriyan Sucharitpolwong, a well-known fortune-teller, known as Mor Yong; his close aide Jirawong Watthanathewasilp; Pol Maj Prakrom Warunprapa who was found dead in hanging in a military jail; and their alleged network. 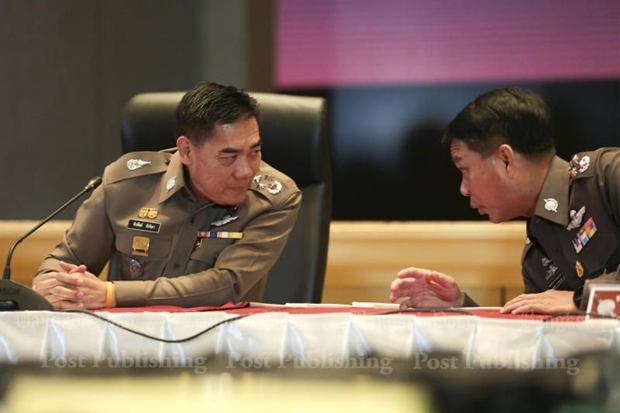 In most of the cases, the three men have been accused of making false claims involving the monarchy and soliciting almost 6 million baht for personal gain.

In a police chart displayed at Wednesday's press conference, Mr Suriyan and Mr Jirawong allegedly cited the monarchy to seek sponsorship from business operators for commemorative pins for the "Bike for Mom" and "Bike for Dad" events and exploited the two royally sponsored cycling events for their own benefit.

They allegedly persuaded those involved in the price quoting to inflate the price and pocketed the difference, part of which was spent investing in a mutual fund and buying a condominium unit.

Mr Suriyan earlier served as an adviser to subcommittees responsible for holding the events.

The trio's arrests surfaced last week when they were taken to the Military Court on Oct 21 for detention.

As evidence of their alleged extortion, police displayed valuables including guns, luxury watches, ceramic dolls, Buddha images and gems confiscated from the suspects. 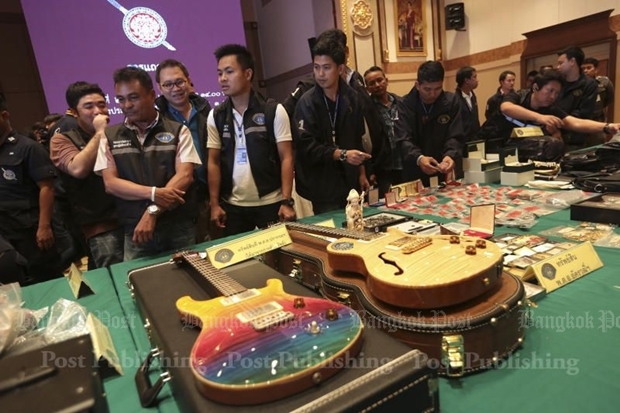 The expensive guitars and other items displayed yesterday. PATIPAT JANTHONG

Some of these items had been seized from former Central Investigation Bureau (CIB) chief Pongpat Chayapan whose criminal network was brought down last year.

The ex-policeman is doing time for several counts of extortion in connection with lese majeste.

Assistant national police chief Srivara Ransibrahmanakul, who heads the investigation, said Wednesday there are more than three suspects and police are collecting evidence to seek warrants for their arrest.

He also said staff from private firms which were allegedly solicited for money have been questioned and it is hoped the investigation will be wrapped up in the next few months.

Among 13 offences, Samart Telcoms Plc is one of the suspects charged by police for allegedly cooperating with Pol Maj Prakrom for setting up and possessing a radio telecommunications station without a licence.

But Samart Telcoms denied the allegation saying the company was only contacted by the communications division attached to the Office of Information and Communication to transfer a DTRS [digital trunked radio system] from Bung Kum station to Baiyoke 2 Tower to support the Bike for Mom event.

CIB commissioner Thitirat Nonghanpitak said Mr Suriyan tried to hide the money by transferring it to his relatives and erased some data from his laptop in an attempt to destroy evidence. Police are working to retrieve the data.

Pol Lt Gen Thitirat said eight police officers who were earlier transferred to inactive posts at the time the lese majeste allegations emerged are being investigated for alleged links.

National Police chief Chakthip Chaijinda denied reports that Pol Gen Prawut Thavornsiri tendered his resignation from the police force and searches were conducted at his house over his alleged connection to the lese majeste probe.

Pol Gen Chakthip insisted the ongoing investigation has found no connection to the police general, who is on leave.

"I've no idea how or where the reports [about Pol Gen Prawut] came about and I never discussed it," Pol Gen Chakthip said. "As for the change of the police spokesman, it is a routine change after a new police chief takes office. The entire spokesman team was replaced, not just one person." 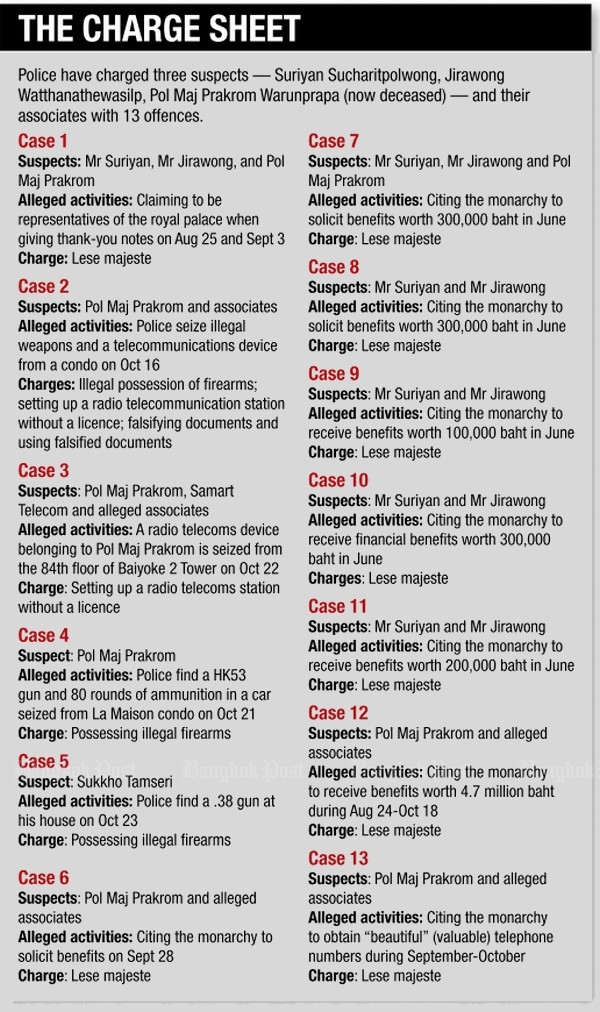