The DSI says founder Phra Dhammachayo (inset) of Wat Dhammakaya was directly involved in use of embezzled funds, part of which went to new buildings at the wat, above. (Bangkok Post file photos)

Wat Phra Dhammakaya's abbot Phra Dhammachayo was among several people who may have played a key role in the Klongchan Credit Union Cooperative (KCUC) embezzlement scandal, says the Department of Special Investigation (DSI).

Pol Lt Col Pakorn Sucheevakun, director of the Bureau of Financial and Banking Crime, leads the DSI team investigating the scandal and its links to the temple.

All the cheques were paid by the cooperative and authorised by former KCUC chairman Supachai Srisupa-aksorn, the key suspect in the scandal.

...investigators believe that receiving this 1.2 billion baht in cheques indicates an intention to collude with Mr Supachai to siphon off money from the credit union.

Wat Dhammakaya's media relations officer Phra Sanitwong Wuttiwangso did not return calls seeking the temple's comments, but one of his assistants told the Bangkok Post: "We have nothing to say except 'let justice run its course'.  "

Pol Lt Col Pakorn said the DSI will wrap up the investigation and forward its findings to public prosecutors next week.

Charges may be filed against more suspects depending on the prosecutors' consideration of the DSI's investigation findings, he added. 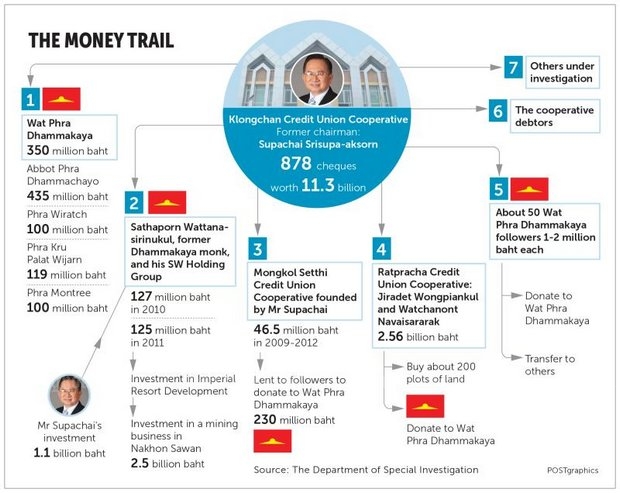 In March, the DSI revealed it had investigated 878 cheques worth 11.3 billion baht paid by the credit union and authorised by Mr Supachai.

Of these cheques, 43 were worth 932 million baht and were paid to Wat Phra Dhammakaya and its monks, including abbot Phra Dhammachayo.

In addition, 27 cheques worth 348 million baht were paid to temple followers with close ties to Mr Supachai.

The article describes how in his youth, the abbot "became infatuated with Hitler, admiring the way the Nazi dictator could control a crowd and expressed a desire to follow in his footsteps."

'Dhammakaya is only a symptom" details how the teachings of Wat Dhammakaya have strayed from the Buddha's teachings here.