The vote count continues in Myanmar. Aung San Suu Kyi's supporters believe her party has won as much as 70 percent of the parliamentary seats, but only 12 seats have thus far been officially declared, all for her NLD party.

As you read all those stories about an NLD (National League for Democracy), keep in mind that the election commission has only declared 12 seats officially. Thus, tomorrow should be a big news day one way or another.

NLD leaders are saying they expect to win 70 percent of the vote, but the first results are now scheduled to be announced at 4pm, according to the Election Commission. Pro-military party leaders now admit they expect the NLD to win the most votes. (15:55; The BBC's Jonathan Head has just reported that the first 12 lower house seats to be announced have gone to the NLD.)

AFP reports that Aung San Suu Kyi did not address the crowd outside the party's Yangon headquarters last night. 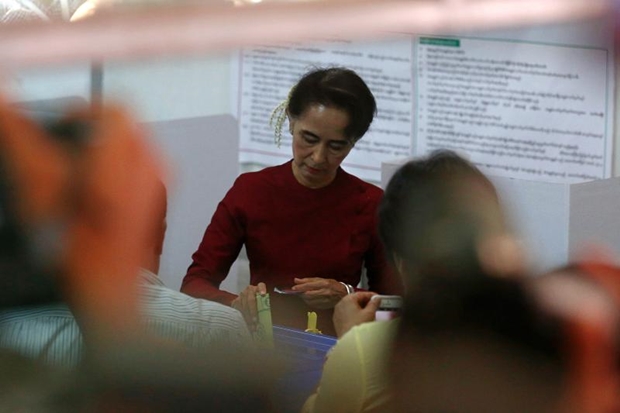 "I urge you to wait for the result from your own homes," he said, adding: "When the result comes out, I want you to accept it calmly."

In the capital Naypyidaw, President Thein Sein, had a similar message.

After casting his vote in the capital, Myanmar's powerful army chief said his troops would respect the voice of the electorate, AFP reported

"Just as the winner accepts the result, so should the loser," Min Aung Hlaing told reporters.

Election commission staff members draw out the votes as local observers look on at a polling station in Yangon on November 8, 2015. The historic poll could see Suu Kyi's opposition launched to power after decades of army rule. AFP PHOTO / Ye Aung THU

Counting has begun after what appears to have been a smooth and largely free and fair election in Myanmar with a very high turnout. Don't expect the final results to be quick, however, and there may be no clear-cut winner although Aung San Suu Kyi's supporters are very optimistic. Myanmar is a big and diverse country and it will not be easy for her NLD to win the two-thirds majority of the vote to be the outright winner.

Here is an early evening report from AFP

After a day marked by euphoric lines of voters – and a rock star welcome for Suu Kyi as she voted – the count began after polling stations shut at 4pm local time (0930 GMT).

Early indications were of an "80 percent" turnout, according to Union Election Commission deputy director Thant Zin Aung -- a figure the opposition will hope favours their bid for a majority.

More than 30 million people were eligible to vote in Myanmar's freest election for a generation.

Here's more from AFP in Yangon 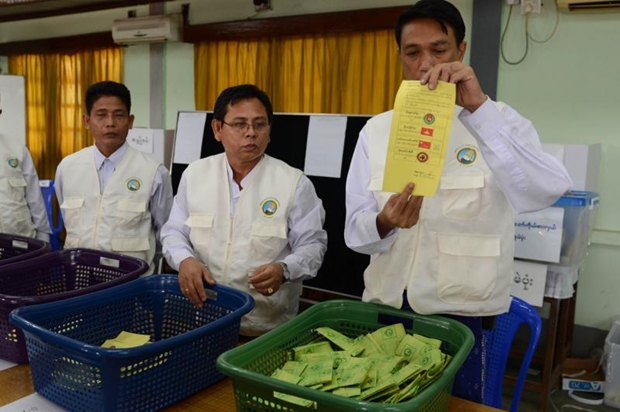 The early queues, which were seen across the country – from the mountainous north to the flat southern delta – pointed to a strong turnout, something observers say will likely benefit the National League for Democracy Party (NLD) as it hunts a decisive poll victory.

It needs to take just over two thirds of the contested seats to win a clear majority.

The ruling Union Solidarity and Development Party (USDP) needs just a third for a possible tie-up with the army, which already has a quarter of all seats guaranteed under the constitution.

Fears of election day chaos in a country which last held a fully contested poll 25 years ago appeared not to have played out – at least in Yangon. 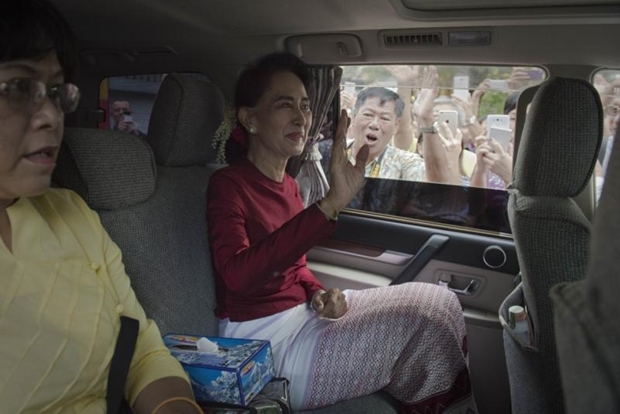 Myanmar opposition leader and head of the National League for Democracy (NLD) Aung San Suu Kyi leaves her house to cast her vote at a polling station in Yangon on November 8, 2015. AFP PHOTO / Nicolas ASFOURI

Opposition leader Aung San Suu Kyi cast her vote Sunday in Myanmar's election, in a landmark poll she hopes will see her National League for Democracy Party win a majority.

Suu Kyi, wearing a red top and flowers in her hair, was mobbed by scores of journalists, while Myanmar voters shouted "victory, victory" as she was ushered from her car into the polling station. 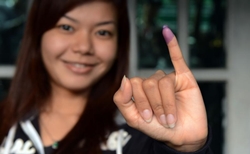 A Myanmar voter displays her inked finger after casting her ballot at a polling center in Yangon on November 8, 2015. AFP PHOTO / ROMEO GACAD

Yangon, Nov 8, 2015 AFP – Myanmar began voting Sunday in a historic election that could thrust Aung San Suu Kyi's pro-democracy party into power and finally pull the country away from the grip of the military.

Queues of people, many wearing traditional longyi sarongs, built up before daybreak at polling stations across Yangon in a sign of the enthusiasm that has accompanied the milestone poll, hoped to be Myanmar's fairest for a generation.

"All polling stations around the country opened at 6am (2330 GMT) at the same time," Ko Ko, an election commission official, told AFP.

Some 30 million people are eligible to vote, in an event that has posed major logistical challenges across a vast and poor country. 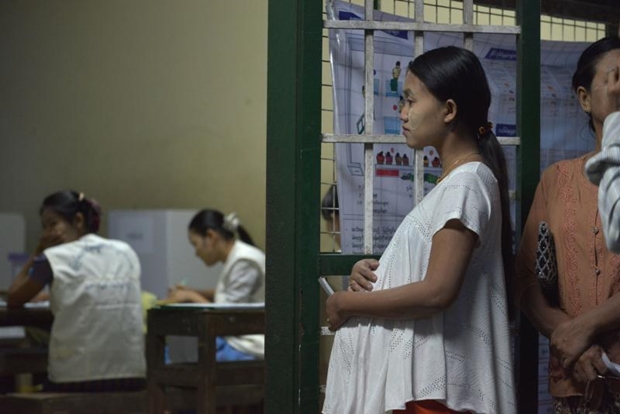 Polls will close in the late afternoon with official results expected to start trickling out by early Monday. Myanmar opposition leader Aung San Suu Kyi gestures towards supporters as she travels in a motorcade ahead of a campaign rally for the National League for Democracy in Yangon on November 1, 2015. Myanmar heads to the polls on November 8 in what observers and voters hope will be the fairest election in decades as the nation slowly shakes off years of brutal and isolating junta rule. AFP PHOTO / Ye Aung THU 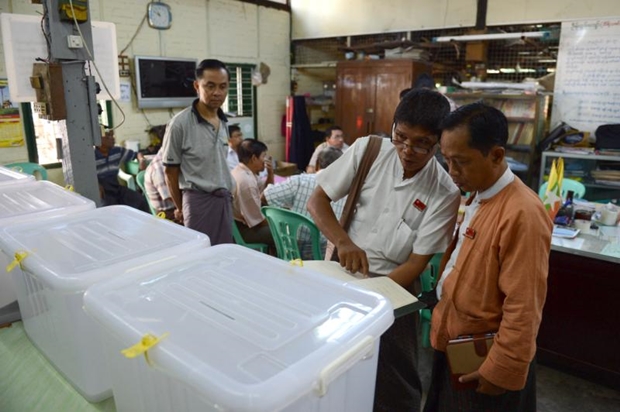 Myanmarese poll observers (R) from the National League for Democracy (NLD) make checks at a polling centre in Yangon on November 6, 2015. The once junta-run nation heads to the polls on November 8 in what voters and observers hope will be the freest election in decades. While NLD party is expected to triumph at key elections this year, Myanmar opposition leader Aung San Suu Kyi's pathway to the presidency is blocked by a controversial clause in Myanmar's junta-era constitution. AFP PHOTO / ROMEO GACAD

Suu Kyi's National League for Democracy (NLD) is eyeing an outright majority at Sunday's general election, the first the party has contested since 1990.

Myanmar was ruled for half a century by a brutal and isolationist junta that crushed pro-democracy movements through a combination of violent crackdowns and political chicanery. 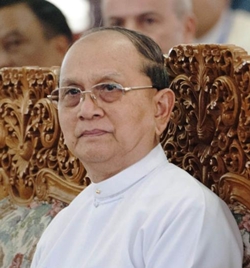 Myanmar President Thein Sein has vowed that his party and the army will respect the outcome of Sunday's election. AFP PHOTO / YE AUNG THU

But in 2011 the military unexpectedly ceded power to a quasi-civilian government led by former top-ranking general President Thein Sein.

The wave of reforms that followed loosened the military chokehold on the nation.

A free press has flourished since, most political prisoners have been released and the economy is creeping back to life in lockstep with the rollback of most international sanctions.

But the ruling, army-backed Union and Solidarity Development Party (USDP) is the main obstacle to a historic NLD win.

Late Friday Thein Sein, who has pegged the election as the centrepiece of reforms, used a broadcast on state television to reassure the electorate that the outcome of the poll will not be disputed.

"The government and Tatmadaw (army) will respect the results of the free and fair election," he said.

"Mother Suu" has received a rock star welcome by waves of red-clad supporters as she campaigned across the country.

Detractors say her reputation as a human rights icon has diminished in recent years, as she has often chosen hard pragmatism over the steely idealism of her house arrest years.

But the 70-year-old is still revered by the nation's pro-democracy camp and garlanded by the international community for her long, selfless struggle.

Suu Kyi is barred from the presidency by an army-scripted constitution, but says she will nevertheless run the government if her party wins. 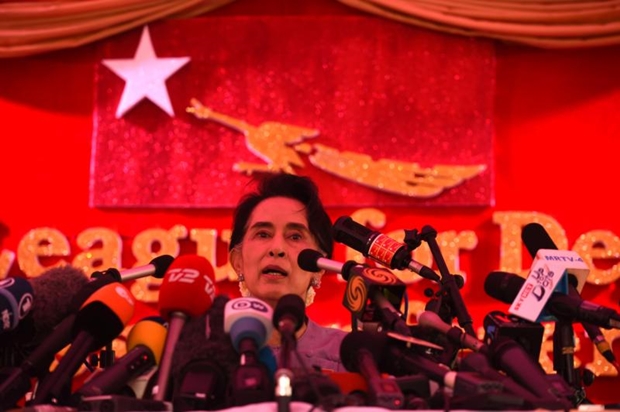 Aung San Suu Kyi speaks at a press conference from her residential compound in Yangon on November 5, 2015, ahead of the landmark November 8 elections. Myanmar's democracy heroine Aung San Suu Kyi on November 5 vowed to run the government if her opposition party wins this Sunday's landmark election, despite being barred from the presidency. AFP PHOTO / ROMEO GACAD

A win for the NLD will represent "a great leap into democracy," she said in her final press conference on Thursday.

With the constitution reserving 25 percent of all parliamentary seats for military appointees, the NLD must take 67 percent of all contested seats in order to claim a majority.

In an election with 91 parties competing, including across restive ethnic areas, its victory is far from assured and the NLD has been burned before by army dirty tricks.

Suu Kyi has raised concerns that poll fraud and voting irregularities are already marring voting in some areas.

She has also set herself on a collision course with the military, declaring an NLD majority would see her take a role "above the president", irrespective of the charter.

That document bars anyone with foreign children or spouse from the top office – Suu Kyi's two sons are British passport holders as was her late husband, who died while she was under house arrest.

Election authorities are expected to release unofficial results within 48 hours of the polls closing. The NLD will also mark its own scorecard.

Whoever wins, the new government will not take its place in parliament until February.