Supporters of Myanmar opposition leader Aung San Suu Kyi read the official results of the elections from a newspaper outside the National League of Democracy (NLD) headquarters in Yangon on November 10, 2015. Aung San Suu Kyi's opposition appeared on the verge of a landslide election win that could finally reset Myanmar after decades of army control on November 10, as a top member of the ruling party said they had "lost completely". AFP PHOTO / Ye Aung THU

Note: If you are really impatient, you can get the latest results from the Myanmar Times live-blog here: http://www.mmtimes.com/index.php/election-2015/live-blog.html 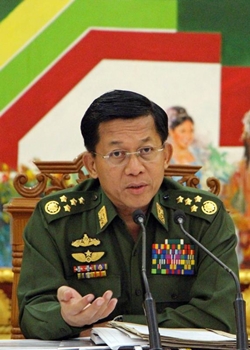 The comments carry significant weight coming from the from Commander-in-Chief Min Aung Hlaing, the head of a military that ruled the country for half a century with an iron fist and kept Suu Kyi under house arrest for 15 years.

Suu Kyi, whose National League for Democracy party were poised for a massive victory after a 25-year struggle, had earlier called for talks on "national reconciliation".

As the announcement was made, the NLD seemed poised for a massive victory after a 25-year democracy struggle, and on the brink of a majority after taking more than 85 percent of the seats declared so far.

The NLD has won 256 seats, 73 shy of an outright majority – but it was almost certain to smash through that marker.

The Myanmar Times reports that President U Thein Sein has congratulated the National League for Democracy on its landslide victory in the November 8 vote and promised a peaceful transfer of power, the party said.

According the the Myanmar Times, The NLD said in a statement this afternoon that Minister for Information U Ye Htut, a presidential spokesperson, congratulated the party for its win on behalf of U Thein Sein.

Thus far, Aung San Suu Kyi's National League for Democracy has won 90% of the seats declared in the Lower House (134/149) & 88% in the Upper House (29/33). Unofficial results indicate that the NLD will easily win the two-third majority needed to form the government although there is still concern about the slowness of the reporting which is proceeding at a snail's pace.

Finally some results have come in for the Upper House and there again, the NLD is far ahead, winning 29 out of the 33 seats declared. The lower house results remain unchanged with the NLD holding 78 of the 88 seats announced. Thus, two days after polls closed, only about 25 percent of the seats have been declared – apart from, of course, the 25 percent that automatically goes to military appointees.

Here's the latest from the BBC via AFP:

Her National League for Democracy (NLD) has secured 78 of the 88 lower house seats announced so far, pointing to a landslide win as the results trickle in.

"We probably will get between, around 75 percent in the union legislature," she told the BBC in an interview.

More results have been announced and the NLD is extending its lead. According to the Myanmar Times' tally the NLD has 49 of the 54 lower house seats announced so far and 96 out of the 106 state/regional seats officially declared. 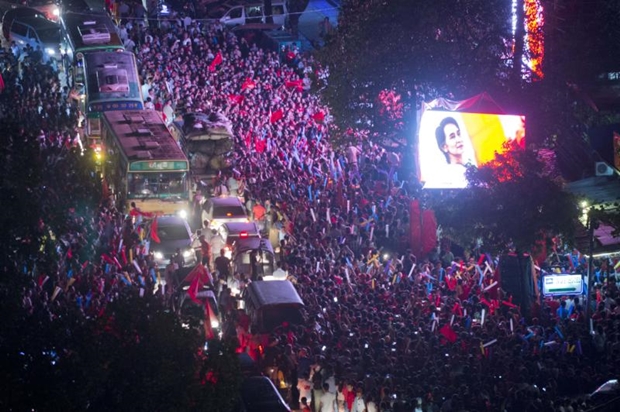 A huge crowd gathers outside the headquarters of National League of Democracy (NLD) party displaying a huge portrait of Myanmar opposition leader Aung San Suu Kyi in Yangon on November 9, 2015. Aung San Suu Kyi's opposition party on November 9, said they are on course to claim more than 70 percent of seats after Myanmar's poll, a gain that could bring a major power shift from the military. AFP PHOTO / ROMEO GACAD

Election authorities have so far announced only a small fraction of the results, but the National League for Democracy has scooped the lion's share of those seats, boosting enthusiasm in the crowds in front of party headquarters in Yangon. 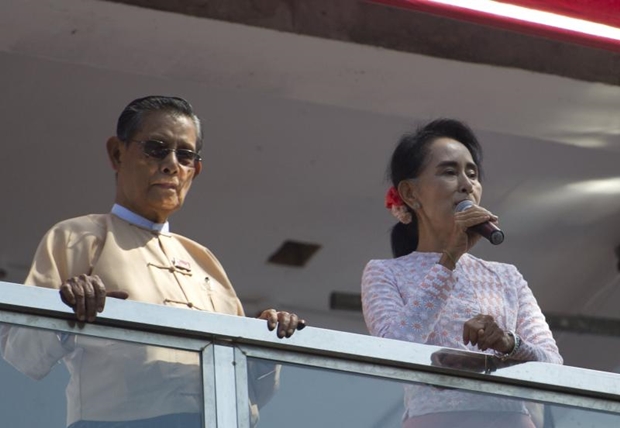 The NLD has so far won 49 lower house seats – including 24 in Yangon and 10 in the country's second city Mandalay, both areas where the party is expected to sweep the vote.

Another two lower house seats have gone to ethnic parties in eastern Shan and northern Kachin states, according to the tally officially released so far.

Sunday's elections saw millions line up to cast their ballots in what many hope will mark a dramatic leap towards democracy in the Southeast Asian nation, which withered for decades under the iron grip of junta rule.

It could take days for the full results to be officially announced, but the NLD has already given a bullish prediction for its first election in 25 years.

Party spokesman Win Htein told AFP that unofficial tallies showed the opposition "on track to win more than 70 percent of seats around the country".

He did not specify if the percentage would translate into power under Myanmar's complex political system.

The NLD, which currently accounts for a tiny proportion of parliament's MPs following landmark 2012 by-elections, is shooting for 67 percent of elected seats in the national legislature to be able to select a president and form a government.

That would be enough to overwhelm the ruling Union Solidarity and Development Party and their military allies – who automatically get 25 percent of seats under a constitution scripted to ensure they still have a major stake in the future.

You can read our previous coverage here: http://www.bangkokpost.com/learning/learning-from-news/757160/suu-kyi-nld-seeks-majority-in-tomorrow-election