Critical but stable is still the description doctors are using for actor Tridsadee Sahawong's condition who remains in intensive care after being infected with the dengue virus and developing severe complications.

Latest: Ramathibodi Hospital is still in need of Type A blood and is requesting help from donors.

Although he would not have been aware of it, Por had visitors yesterday, his wife 'Bow' Waenda and his two-year-old daughter Nong Malee.

In the latest official update from Ramathibodi Hospital, actor Tridsadee Sahawong remains in a critical but stable condition which requires intensive care and machine-assisted breathing, heart and kidney functions. On the positive side, bleeding in the right lung has stopped, but some bleeding continues in the left lung cavity. 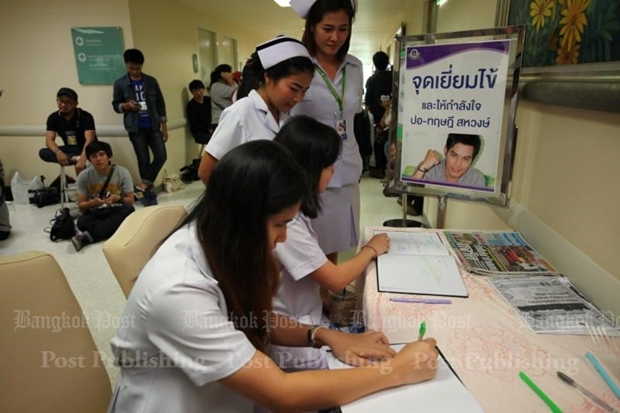 Well-wishers sign a get-well book for actor Tridsadee 'Por' Sahawong at Ramathibodi Hospital where he is being treated for dengue fever. He remains in a critical but stable condition. PANUPONG CHANGCHAI

According to the 4th statement released from Ramathibodi Hospital yesterday afternoon, the bleeding from his liver has slowed, leading to improved liver function.

He now has a regular blood cell count but still needs dialysis, the  doctors said.

However, his overall symptoms need to be monitored carefully on a daily basis to ensure complications do not arise. 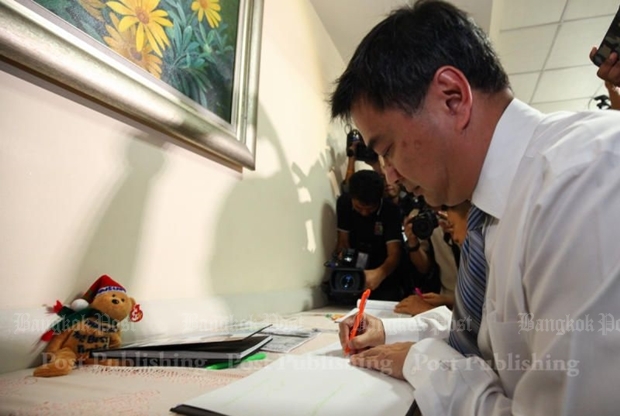 Suthee Yoksan, director of Mahidol's vaccine centre, said yesterday his centre tested a sample of the actor's blood and results showed that he has been infected with the second strain of the dengue virus.

There are four different known types and any one of them can lead to the full-blown fever, Dr Suthee said.

The results also showed that a large quantity of the dengue virus was found in his blood, he said.

Doctors now say that a likely reason that actor Tridsadee Sahawong's condition is so severe is that this is the second time he has contracted dengue fever. It is likely a different strain, one of four found in Thailand, from the first one.

This morning doctors at Ramathibodi Hospital treating actor Tridsadee Sahawong reported little change in his condition which was still termed "critical" and still required intensive care. He was being treated for bleeding in the lungs and was still receiving blood transfusions. He was still in need of machine assistance for his kidney, lung and heart functions. Doctors did not report any worsening of his condition, however.

Permanent secretary for public health Sophon Mekthana yesterday said actor Tridsadee Sahawong was not suffering from a new and deadly viral strain of dengue fever that could spread through the general public, but that was little comfort to the doctors treating him.

Actor Tridsadee Sahawong, also known as Por, is in critical but stable condition after being infected with the dengue virus and developing serious complications.

Porpon Rotjanapan, an infectious disease expert, said Tridsadee was admitted to the hospital on Monday afternoon.

He said the actor suffered from laboured breathing, an irregular blood cell count, low blood pressure, high levels of acid in his blood and decreased urine output that led to kidney failure. A defibrillator had to be used on his heart for three minutes to make it beat regularly again, Dr Porpon said.

"The symptoms on the first day were the most critical. His blood pressure was very low so we needed to give drugs to raise it. Now, his blood pressure is close to normal. We have seen a positive response to our treatment," he said.

Dr Ampaiwan Chuansumrit, a blood specialist, said the bleeding inside his cells had already stopped, but his symptoms needed to be carefully monitored on a daily basis to ensure complications do not arise.

"It is not a new strain of dengue fever. But each person's response to the disease is different," she said.

The good news is that doctors this afternoon said Thrisadee "Por" Sahawong's condition had not worsened but he was still in intensive care in critical condition. Doctors had controlled his internal bleeding but he still needed blood transfusions. Likewise, his breathing was being assisted and doctors were working on removing fluid from his lungs. His kidney function was also impaired, so he was being machine-assisted in removing liquid wastes as well. 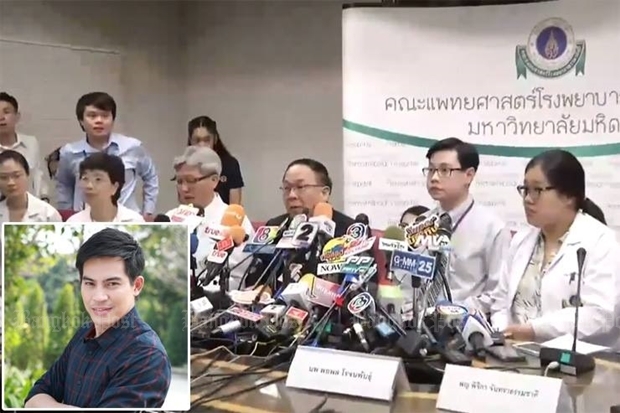 The condition of TV star Thrisadee "Por" Sahawong remains critical this morning, although there are some signs of improvement, Ramathibodi Hospital doctors told a packed press conference this morning.

The 37-year-old actor is breathing through a respirator in an intensive care unit and has serious kidney problems, the after-effects of a extreme case of dengue fever.

Post Today quoted Dr Surasak Leela-udomlipi, director of Ramathibodi Hospital in Bangkok, as saying on Tuesday that the actor had been receiving treatment at another hospital last week, but his condition worsened. 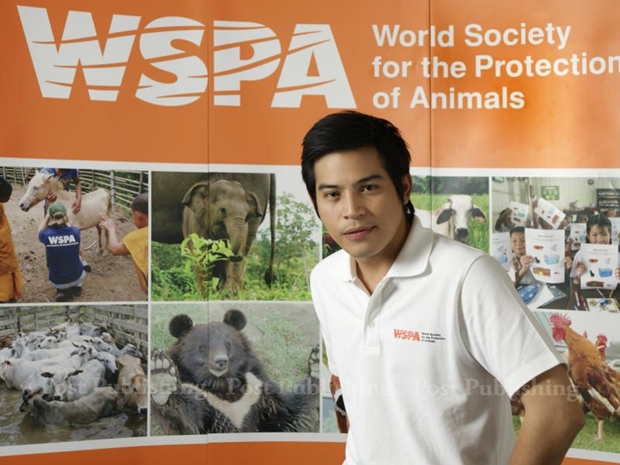 Actor Thrisadee "Por" Sahawong, an ambassador of the WSPA (World Society for the Protection of Animals), is still in critical condition, according to doctors treating him at Ramathibodi Hospital.

At this morning's press conference, doctors said his condition became extremely critical yesterday when, in addition to his kidney and breathing problems, his blood pressure dropped precipitously and his blood was abnormally acidic.

Today, however, the doctors said that the patient was responding well to treatment although his condition was still critical. The hospital will continue to provide updates.

Meanwhile, doctors have also called for donations from donors with blood-type A.

Information from a televised press conference and Post Today