There is now direct pressure on Deputy Defence Minister and former army commander General Udomdej Sitabutr to quit and try to relieve pressure on the government over the growing Rajabhakti Park corruption scandal. PATIPAT JANTHONG

Gen Udomdej Sitabutr insists he will stay on as deputy defence minister despite growing pressure for him to resign over the Rajabhakti Park controversy.

Wassana Nanuam has this update to this morning's story:

Gen Udomdej Sitabutr insists he will stay on as deputy defence minister despite growing pressure for him to resign over the Rajabhakti Park controversy.

Speaking before Tuesday's cabinet meeting, Gen Udomdej said he would rather not comment on allegations that the Rajabhakti Park project – which he initiated while serving as army chief – lacked transparency and was plagued with irregularities.

"The Defence Ministry has set up a committee to investigate.  Let's wait for the committee to finish its work," he said.

Gen Udomdej insisted that the project had been carried out with transparency.  Every step of the implementation of the project was closely supervised by a committee whose members had a strong intention of making it a national treasure – for the Thai people, or even foreigners, to remember the benevolence of the past Thai kings.

The former army chief called for the media to avoid making unjust and false criticism, as it would only discourage all the well-intended officials involved in the project.

Gen Udomdej said he was now awaiting the result of the investigation by the Defence Ministry-appointed committee, and welcomed any further inquries, possibly by the Office of the Auditor-General and the National Anti-Corruption Commission.

He believed the defence committee probe would include all details about the project's funding and expenditures as well as other issues under suspicion. He would not interfere in the work of the investigation committee.

Gen Udomdej said he would remain in the cabinet while the committee was investigating.

"The prime minister has stressed that we need not worry and continue to do our jobs. He said when the time comes everybody must go.

"During this time, I will continue to work.  But I want to make it clear that I have never wanted to cling on to this position for a long time. I will stay on for only as long as necessary," Gen Udomdej said.

Pressure mounts on Udomdej to quit

Deputy Defence Minister Udomdej Sitabutr is coming under growing pressure to step down despite the army making efforts to clear him of any allegations surrounding the Rajabhakti Park project.

Defence Minister Prawit Wongsuwon said the former army chief is a grown man and should know the best course of action to take without waiting for a signal from the government.

"He's a grown man and he can think for himself. He served as an army commander. There's no need for me to tell him what to do," he said.

They come as Adm Phajun Tampratheep, former close aide to Privy Council president Prem Tinsulanonda, said he would step down if he was in Gen Udomdej's shoes, even if he had nothing to do with the alleged irregularities.

"It's about maturity. Some people think allegations do not reach them [and there's no need to take action].

"I'm not talking about political responsibility. It's about taking responsibility for your job. It takes courage. It's time this kind of thing happened in our society," he said.

Gen Udomdej, also chairman of the Rajabhakti Park Foundation, earlier admitted that an amulet trader had demanded commission fees from foundries contracted to cast the statues of former kings at Rajabhakti Park. 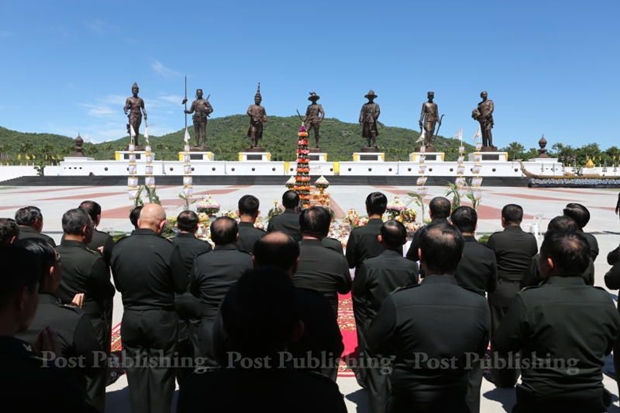 Moreover, his former close aides, Khachachart Boondee who was stripped of his army rank, and Maj Gen Suchart Prommai, face arrest warrants in connection with a high-profile lese majeste case.

Gen Prawit has ordered a fresh probe into alleged corruption in the construction of the park, but Adm Phajun said if the results turn out the same as the army's internal one they would be useless.

The Defence Ministry inquiry is headed by deputy permanent secretary for defence Gen Chaicharn Changmongkol. Any irregularities will be forwarded to the National Anti-Corruption Commission and the Office of the Auditor-General.

A source at the Defence Ministry said Gen Udomdej is waiting for the results of the Chaicharn committee probe before making a decision on whether to step down.

Justice Minister Paiboon Koomchaya admitted the alleged irregularities surrounding the park had had an impact on the government's credibility.

"We can't say it hasn't had an effect because political groups are coming out [to criticise]. We need to listen closely to what they are saying and what they are getting at. I've been saying it's not what they are trying to make it appear," he said.