Leicester City and King Power are still on top of the Premier League as the season nears the half-way point, Jose Mourinho's Chelsea the latest victim, beaten 2-1.

LEICESTER, AFP – Jamie Vardy and Riyad Mahrez fired Leicester back to the top of the Premier League and extended Chelsea's miserable season with a 2-1 victory on Monday that heaped renewed pressure on Jose Mourinho.

Mahrez created Vardy's 15th goal of the season with a wonderful cross on 34 minutes.

Then the Algeria winger scored superbly on 48 minutes to take his own tally to 12 and double the Foxes' lead as their fairytale season continued.

Claudio Ranieri's side have lost just once all season and, although Chelsea substitute Loic Remy got one back in the closing stages, the hosts held on for a win that put them two points clear of second-placed Arsenal and condemned beleaguered Blues boss Mourinho to a ninth defeat in 16 league games.

Mourinho's men remarkably sit just one point above the relegation zone and, a week after their shock home loss to Bournemouth, inevitably there will be more speculation that the Portuguese coach faces the sack.

To add to Mourinho's problems, Chelsea midfielder Eden Hazard limped down the tunnel looking frustrated after his manager had asked him to continue following an injury.

In contrast, Vardy's amazing season continued as the England striker netted just one game after his record-breaking run of 11 successive league matches with a goal came to an end. 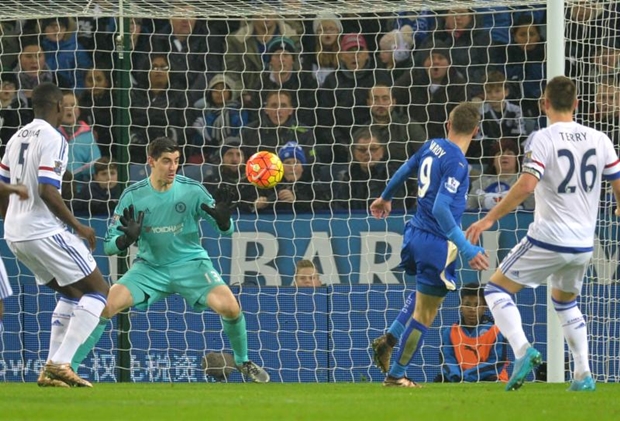 Leicester started brightly and Mahrez tricked his way past Cesar Azpilicueta early on to create a shooting chance.

He side-stepped John Terry on the edge of the area but his effort gave Chelsea goalkeeper Thibaut Courtois a comfortable save.

There was another scare for the reigning champions when  Courtois dropped an inswinging free-kick by Christian Fuchs, but Robert Huth could not react quickly enough to pounce on the loose ball.

Then Leicester captain Wes Morgan had to make a brave block from a shot by Hazard after Chelsea caught the home side napping in defence.

Leicester suffered a blow when influential midfielder Danny Drinkwater was forced to limp off on 17 minutes to be replaced by Andy King, but the hosts continued to make the running.

Mahrez tried his luck again from the edge of the box in the 19th minute after Chelsea struggled to clear a long throw-in by Fuchs, but again the Algerian's shot was straight at Courtois.

The visitors then suffered an injury setback of their own when Hazard went down after colliding with both Vardy and Leonardo Ulloa. 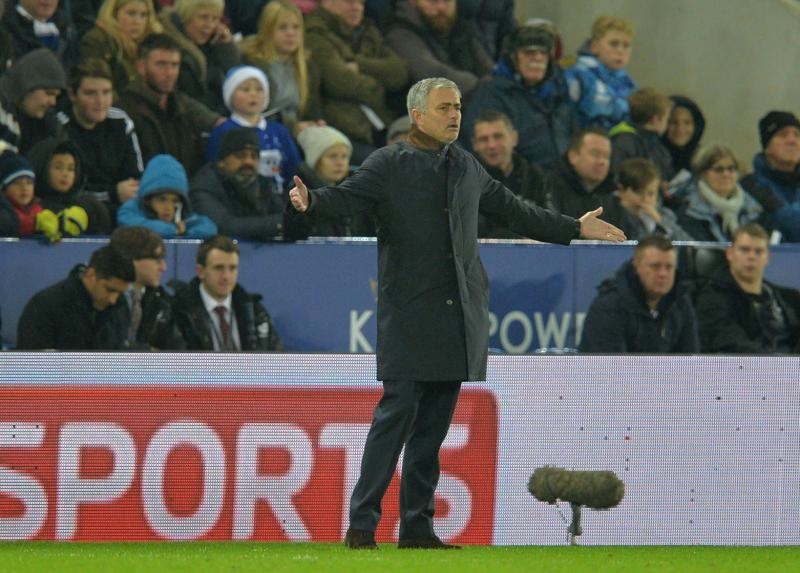 The Belgian returned to the field under instruction from Mourinho, but turned and headed down the tunnel just a few seconds later, signalling that he could not play on.

That came on 31 minutes and Leicester led just three minutes later as their two most valuable players combined.

Mahrez crossed from the right and Vardy crept between Terry and Kurt Zouma before volleying past Courtois.

Marc Albrighton was the next to test Courtois with a long-range effort which the keeper grasped gratefully.

But Mahrez doubled Leicester's lead three minutes into the second half with a moment of brilliance.

He collected Albrighton's curling, crossfield pass and wrong-footed Azpilicueta with some wonderful footwork before bending a sublime shot past Courtois into the far corner from 12 yards.

Chelsea finally began to apply sustained pressure around the hour-mark and Leicester defender Danny Simpson had to make a crucial double-block in the goalmouth to deny Diego Costa and Pedro.

Leicester goalkeeper Kasper Schmeichel made a superb save with his legs to deny Costa in a one-on-one before Fuchs made a timely goal-line clearance from a corner to deny Branislav Ivanovic.

Chelsea maintained the pressure on the home goal and finally reduced the deficit with 13 minutes remaining.

Pedro burst down the left and crossed for fellow substitute Remy to head home, but it was too little too late as Leicester pushed Mourinho a step closer to the axe.