National Broadcasting and Telecommunication Commission hailed the success of the bidding process, but industry analysts are talking about a 'winner's curse' for winner operators True Move and Jasmine International. WICHAN CHAROENKIAPAKUL

Analysts are wondering if winners Jasmine International and True Corporation engaged in "irrational" bidding, paying world record bandwidth prices which could cause them future losses.

The two big questions mobile industry analysts are debating are how AIS failed to re-secure its 900MHz spectrum, and whether True Move and Jasmine International bid too heavily.

Some industry veterans suggested True Move and Jasmine could end up the big losers from the auction given the prohibitive prices they will have to pay for the spectrum.

The introduction of a new player into the market is also expected to increase price competition in the sector, making it harder for operators to recoup their investment. Fears of a price war forced telecom shares to a three-year low on Friday.

Pipat Luengnaruemitchai, assistant managing director of Phatra Securities, wrote on his Facebook page that the high prices could prove a “winner’s curse”, similar to the digital TV industry where returns have failed to match the high prices paid for broadcast licences.

Kasikorn Securities (KS) viewed the auction result as a “negative surprise”, as it brings newcomer Jasmine International into the market. It expects True Move will have to raise funds after the auction. While likely to steal market share from AIS and Dtac, the company could incur steep losses in 2016-18, KS said.

For Jasmine International, KS said its costly bid reflects an “irrational” decision which could affect overall share prices across the telecom sector. 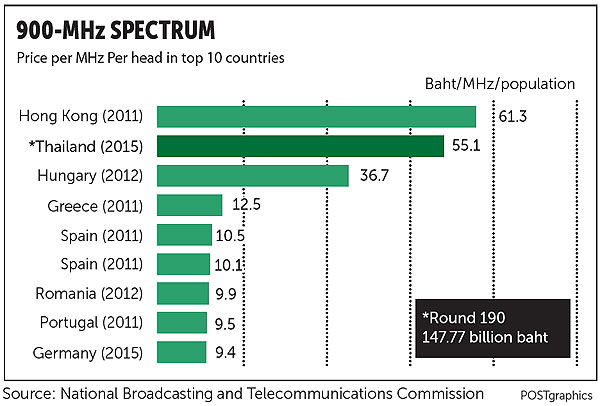 AIS, which had been expected to use its stronger balance sheets to boost its 4G network, said in a statement yesterday that it withdrew from the auction because the price had stretched beyond fair value.

“AIS put a lot of research into determining the fair value of the spectrum, which included working with a professional consulting firm to run possible scenarios and outcomes from the auction,” said the company, which faced accusations of driving up the bid prices for its competitors.

“The bidding price exceeded the company’s expectations of fair value, so we decided to exit the auction. With the decision to withdraw, AIS can allocate capital to deploy our 4G network quickly to ensure higher network capacity and greater quality.”

Col Settapong Malisuwan, vice-chairman of the National Broadcasting and Telecommunication Commission, said the regulator will hold a meeting tomorrow to formally approve the winners. He hailed Jasmine Internationals entry to the market as “good news”.

Col Settapong said True Move’s successful bid means it now has the highest amount of bandwidth of all the Thai operators. “True Move has the opportunity to overtake Dtac to become the country’s second largest operator over the next few years,” he said. 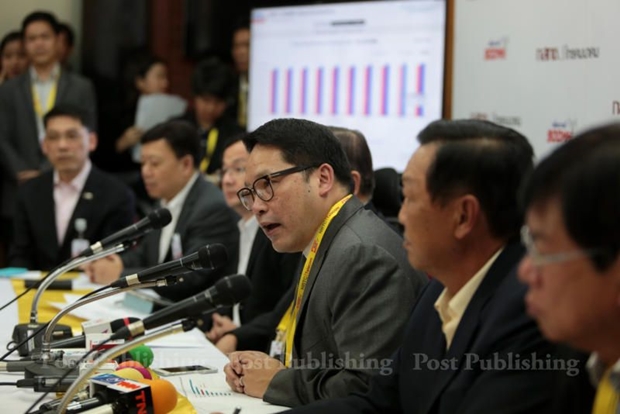 Jasmine International and True Corporation have won the two 10-megahertz 4G licences at the world's record prices of 75.65 billion baht and 76.30 billion baht respectively in a marathon auction that ended early on Saturday.

Jasmine's victory will pave the way for its first foray into mobile internet. The company currently provides landline broadband services under the 3BB brand.

The five-day auction, which ended in the 199th round, will bring in 151.95 billion baht in state revenue, bringing the total from mobile spectrum bids this year to 232.73 billion.

The auctions for the 900-MHz spectrum will go down in world history as being the priciest, breaking the previous record set in Hong Kong.

However, if based on per MHz per head of population, Thailand comes in second after Hong Kong.

Most industry veterans said mobile operators were buying with the future in mind to reap the benefits of lucrative revenue streams stemming from 4G wireless technology.

NBTC secretary-general Takorn Tantasith said the 900-MHz bidding winners would not be hurt by the world’s record-breaking bids, as operators earn revenue of at least 2 billion baht a month.

The money from the auctions may be used for public infrastructure development.