Jasmine group CEO Pete Bodharamik talks about Jasmine's future after winning a 4G licence at a news conference at the group's head office on Chaeng Wattana Road on Monday. (Photo by Tawatchai Kemgumnerd)

True Move and Jasmine International have both defended their record-breaking bids for for 4G bandwidth, saying they make good business sense. Investors do not seem impressed as shares throughout the sector fell heavily today.

After Jasmine's press conference, It didn't take long for True Corporation to make it case. Here is a short summary for our online reporters: "We regard it as a risk with high gains," says Mr Suphachai. KITJA APICHONRAJAREK

The 76.30-billion-baht price True Corporation Plc is committed to paying for 10 megahertz on the 900MHz band is not high and will enable it to cut network costs by 45 billion baht, its CEO said on Monday.

"True now has a 20% market share. We set a target to increase it to 34% over the next five years. We will spend 55 billion baht expanding the 4G network nationwide in three years," CEO Suphachai Chearavanont told a news conference on Monday.

True, through its subsidiary True Move H Universal Communication, won the licence for the second lot of the spectrum at 76.30 billion baht while Jasmine International won the first lot at 75.65 billion baht.

"This enables us to manage 2G to 4G usage efficiently, reduce risks in the long term and expand the growing True Move H customer base.

"The 900MHz is a superior band and the price is not expensive, all things considered. There are already 15 million 2G customers on the band with different operators and they will be our target. It's not an empty band like in foreign countries.

"We also have equipment and chipsets ready which will help us cut network expansion costs by almost 45 billion baht. It has high value and potential, especially in high buildings.

"We regard it as a risk with high gains," he said.

Evening update from our online reporters

Investors did not seem impressed, however, with shares of Jasmine and those of other players in the telecom sector falling heavily.

Mr Pete announced that Jasmine International Plc, the newcomer in the mobile industry, has pledged to invest 20 billion baht over the next three years, with the help a foreign partner whom it declined to name.

It aimed for its mobile subsidiary, JAS Mobile Broadband Co Ltd, to serve 2 million numbers by next year and targeted to become No.2 in the fixed/mobile broadband market.

The Jasmine group CEO held a news conference for the first time after winning the Lot 1 licence at the 900-megahertz band auction at 75.65 billion baht last week.

On criticism the price was too high, the executive said it would not affect the business because the payment terms were flexible.

"The first payment is only 50% of the starting price and the rest will be paid over three years. We are confident we can pay them," Mr Pete said.

Regulators eased the payment terms for the 900MHz auction from what was required in the 1800MHz bidding in November.

In the 1800MHz auction, each winner was required to pay half the prices it offered within 90 days and 25% each in the second and third years.

But winners of the 900MHz bidding are required to pay 8.04 billion baht or 50% of the reserve price in the first 90 days and 25% each in the second and third years. The remaining sum — the amount above the reserve price — will be paid in the fourth year. 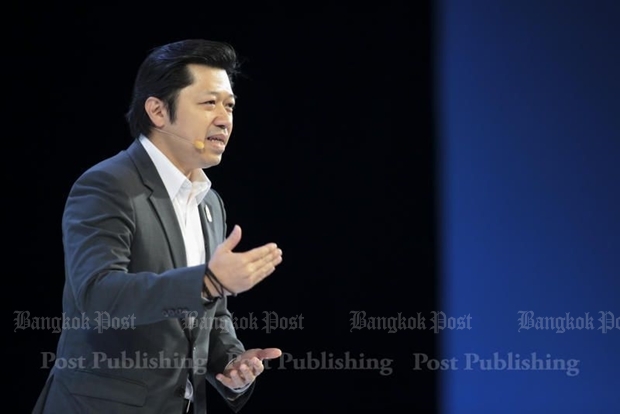 True Move, the country's third-largest mobile operator, insists its bidding price for the 900-megahertz licence is not "extremely unreasonable", despite concerns that prices offered went higher than many were expecting.

"The bidding price is within the company's expectations of reasonable value, following our considerable research into determining the real value of the spectrum," said Suphachai Chearavanont, chief executive of True Corporation, the parent firm of True Move.

"The price did not exceed our figures which were based on many studies and in working with several consulting firms before the auction took place," Mr Suphachai argued.

Noppadol Dej-Udom, chief financial officer of True Corporation, said the bidding price was reasonable when compared with the massive growth in the use of mobile data and the huge growth in Thailand's mobile data market, of up to 200% last year.

The cost of acquiring new spectrum is worth it to the operators, which factor the cost into their business plans, he said.

True Move and Jasmine will go before the media today to explain their strategic plans on providing 4G.

Total Access Communications (Dtac), which failed in both the 1,800-MHz and 900-MHz auctions, said they will allocate capital to expand their 4G network into other bands for greater quality and higher capacity, despite not having a slot in the 900-MHz band.

"If operators could add more capacity and speed to their networks through technological upgrades and more base stations, they wouldn't be paying such ridiculous prices for new spectrum," said an industry source who asked not to be named.

National Broadcasting and Telecommunications Commission (NBTC) member Prawit Leesathapornwongsa said he believed that Jasmine, as a new player in the market, will seek to cooperate with operators who failed in the 900-MHz auction to save on infrastructure investment costs.

He conceded the auction price Jasmine offered is too high to make a profit.

Mr Prawit, however, said the infrastructure investment costs for operators of the 900-MHz spectrum will be lower than for the 1800-MHz despite the higher bid prices.

This is because the 900-MHz spectrum can cover a longer range. One 900-MHz tower can cover the same area as three 1800-MHz towers, he said.

You can read my earlier story here:http://www.bangkokpost.com/learning/learning-from-news/799716/4g-winners-jasmine-and-true-pay-world-record-prices