In case you are wondering, according to about.com, it is illegal to buy US lottery tickets online or through the mail although there are many scammers who will tell you otherwise. Don't give them your money. You don't need to be a US citizen to win, but you need to buy your ticket in the US.

In addition to the winner in California, there appear to be at least two more winners, one in Tennesee and the other in Flordia. The winners will split the jackpot which has now been estimated at $1.6 billion.

The California Lottery says the State has at least one winner. Due to last-minute sales, the jackpot exceeds $1.5 billion, or $930 million if the winner chooses a cash payment instead of instalments over 29 years. 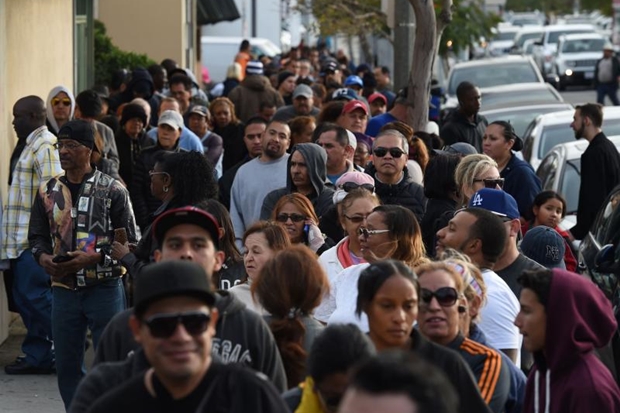 People wait to buy California Powerball lottery tickets outside the famous Bluebird Liquor store which is considered to be a lucky retailer of tickets, in Hawthorne, California on January 13, 2016. Record sales drove up the largest jackpot in US history to a whopping $1.5 billion as people dreaming of riches flocked across state lines and international borders to buy tickets. / AFP / MARK RALSTON

The winning numbers for the US Powerball lottery have been drawn: 08 27 34 04 19, POWERBALL NUMBER 10. Experts say there could be a winner this time because 85.8 percent of possible number combinations had been selected by midday after huge last-minute sales. The odds against any ticket being the winner are astronomical, however, a one in 292.2 million chance. That roughly equivalent to flipping a coin 28 times and getting all heads.

The 44 state governments were lottery tickets are being sold are the big winners, collecting billions of dollars in much-need revenue. Much of this goes into education, especially scholarships for needy residents.

Washington, AFP –  The jackpot for the US Powerball lottery rose to a whopping $1.3 billion (1.19 billion euros) on Sunday after organizers said there was no winner in the weekend draw.

The Powerball prize rocketed to $950 million on Saturday, fueling a frenzy of lotto ticket buying across the United States.

Numbers were drawn and announced late Saturday at 10:59 pm (0359 GMT Sunday) – but hours later lottery officials said there was no winner.

"There was NO JACKPOT WINNER in tonight's #Powerball. We are OFFICIALLY #InSearchofaBILLIONAIRE ($1.3 BILLION)!" the lottery of the District of Columbia, where the US capital is located, wrote on Twitter.

According to the rules, the winner can choose to be paid the full jackpot in annual instalments over 29 years or take a lower one-off payment in cash.

The cash for the new jackpot would amount to $806 million before taxes, according to the official Powerball site.

Drawings for the Powerball jackpot began on November 7, and despite a new series of numbers announced every Wednesday and Saturday since, no winner has been declared.

Americans with dreams of life-changing riches have been flocking for days to buy lottery tickets and a chance at winning a tsunami of cash. 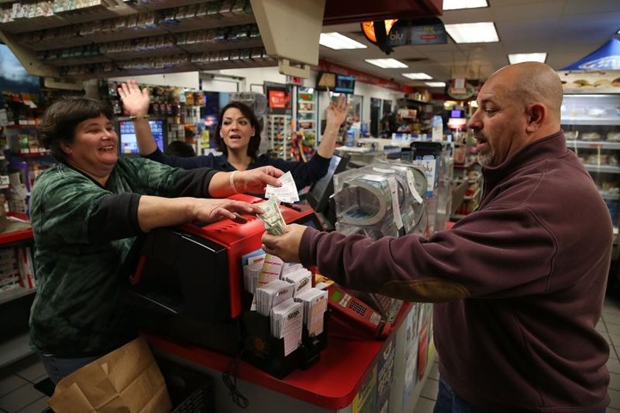 Gale Call (L) and Sherrie Haines (C) sell a Powerball ticket to Mike Nastasi (R) at the BP gas station on January 6, 2015 in Dunkirk, Maryland. People are visiting lottery counters across the United States with hopes of hitting it big . Mark Wilson/AFP

Powerball tickets are sold in 44 states as well as the District of Columbia, the commonwealth of Puerto Rico and the US Virgin islands.

In the Powerball game, five white balls are drawn from a drum containing 69 balls. One red one is pulled from a drum with 26 balls.

To win, all six numbers on the lottery ticket must be correct, with the first five in any order. The final number, however, must be the Powerball number.

The current prize shatters the previous record for a US lottery jackpot of $656 million, scooped by three winning tickets in North Carolina, Puerto Rico and Texas in March 2012.

The next drawing is scheduled for Wednesday, January 13, organizers said.

Powerball starts its jackpot at $40 million and lets it grow if there are no winners.