Angel dolls undergo special rituals to have a spirit channeled into them and this includes magical symbols being inscribed on them by a monk. 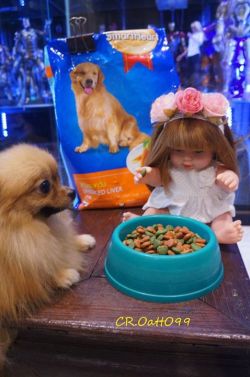 Luk thep angel child dolls, or just "angel dolls" for short, are believed by their owners to possess supernatural powers gained through blessings and incantations.

Angel dolls are believed to bring good luck to their owners, also known as the doll's "parents".

The lifelike dolls are dressed like children in beautiful clothes and lovely hairdos.

Their parents make sure they are good parents and go out of their way to make sure that their stuffed children are coddled and cosseted.

From dressing the dolls up to securing seats in restaurants and airplanes, large amounts of money are spent on the dolls as people would spend on their flesh and blood children or perhaps on a treasured poodle.

The Prime Minister, however, remains a bit sceptical.

"It's something that society should decide if it's real or not," said Gen Prayut. "It's a belief. But I don't know whether it's a sustainable one."

It has been a frenzied week for the dolls, their parents, and observers in the general non-doll owning public.

Though the phenomenon of the angel doll took off last year, last week after airlines gave permission to purchase seats for dolls, scores of restaurants and hospitality businesses followed suit and promoted themselves as angel doll-friendly.

Tutorial schools and nurseries even began offering private sessions for those owners seeking to invest in their doll's education and future.

On Monday, a monk in Nonthaburi was photographed while performing a mass blessing of the dolls, sprinkling them with holy water and allegedly putting sacred spirits in them.

Feeding the dolls, teaching the dolls, treating the dolls as children -- some say it is just a new belief on par with other beliefs that people have, others see something more sinister, a sign of psychological despair that perhaps indicates mental health issues that need to be dealt with urgently. 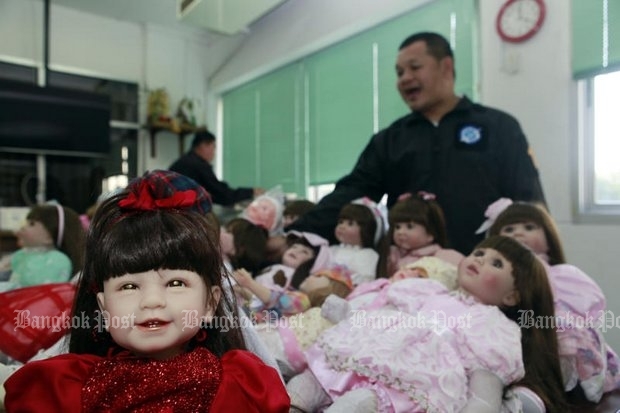 Anti-economic crime police seized more than 100 luk thep at various Bangkok locations for alleged tax evasion after vendors were unable to produce custom tax papers. According to police, the dolls were imported from China. (Photo by Apichart Jinakul)

The National Office of Buddhism, meanwhile, is looking into reports that several Buddhist temples and monks are performing doll rituals. Critics warn the practice might not be in line with the monastic code of conduct (Patimokkha) (see here).

Somkiat Thongsri, director of the Supreme Sangha Council's Secretariat Office, said he has ordered provincial Buddhism offices to investigate a number of reports about monks performing rituals on dolls and to find out whether this violates the monastic code of conduct. Mr Somkiat also called on Buddhists to be aware of what Buddhism actually is.

Temples perform blessings and incantations for the dolls which are as known as the Plook Sek ritual.

One of the monks performing the popular rituals is Phra Ajarn Vinai Thitapanyo of Wat Bua Kwan temple in Nonthaburi province.

Spending 5-10 minutes on each doll, the monk writes on each doll the magical symbols one commonly sees on angel dolls. The temple is usually crowded with eager doll owners every day especially on weekends some bringing many dolls to be blessed in the ritual. 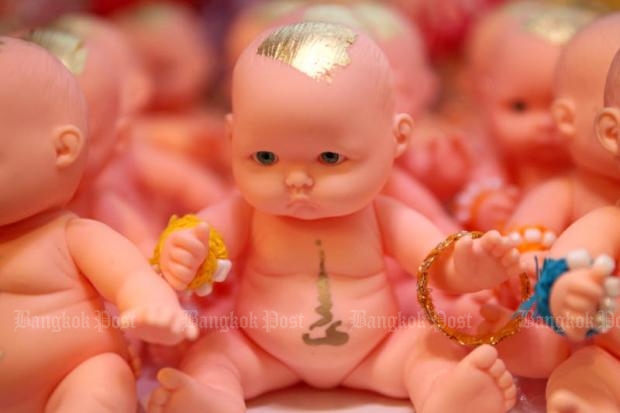 Magical symbols inscribed on a doll along with gold leaf and bracelets.

During the rite the angels are believed to move into the doll, a guardian angel who will ensure the owner good luck ("the spirit was channeled into the doll" is another way to say it in English). 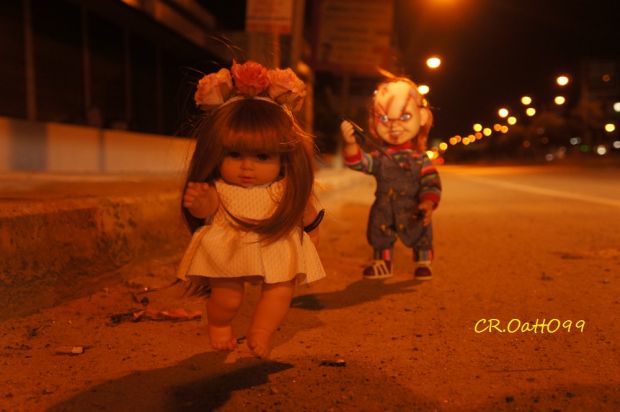 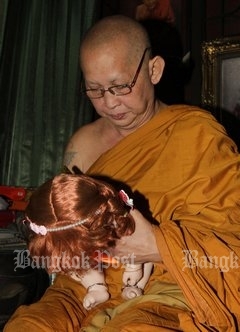 Phra Vinai Tidpanyo performs a rite to instill powers in angel child dolls at Wat Bua Kwan Phra Aram Luang in Nonthaburi. The monk spends 5-10 minutes placing magical geometric shapes on the front and back of the dolls. But while doing this the monk also tells the owners not to be so gullible and only do good deeds. (Photo by Tawatchai Kemgumnerd)

How do monks performing the rituals justify angel doll rituals?

The monk Phra Ajarn Vinai told Thai Rath newspaper that he cannot stop people from believing in the supernatural powers of the dolls, so it is best to put this to good use.

After the dolls are blessed the owners feel happy, so happiness is one reason for the rituals.

However, he warns the doll owners must also show wisdom (panya) and not be stupid .

A spokesman for the National Office of Buddhism says a good monk cannot rightly refuse to bless the dolls.

The Plook Sek doll blessing ritual is no different from blessing an automobile or the many other rituals that monks routinely perform.

Doll rituals ease the fears of faithful Buddhist doll owners and provide them with peace-of-mind.

Furthermore, these rituals are not being carried out as a business (there is "no commercial intent") and this makes them acceptable to Buddhist teachings.

"If the ritual was performed in order to receive commercial gain or if the people were directly asked to make more donations then this is improper. That is what is known among devout monks as ‘Deracharn Wicha’ or ‘Corruption of Knowledge’ and is not supported by the Sangha Buddhist Supreme Council."

So officially, at least for now, doll blessing ceremonies are permitted.

BUDDHIST CRITICISM OF PRACTICE OF DOLL-RAISING 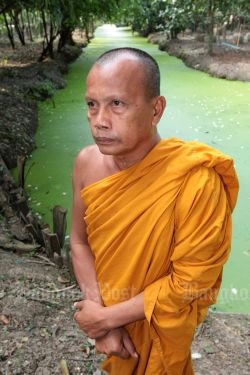 Phra Payom Kalayano of Wat Suan Kaew, Nonthaburi lashed out at raising angel dolls as if they are children as un-Buddhist superstitious behaviour, likening the angel doll craze to the Jatukam amulet fad years ago.

There are monks critical of the practice of raising angel dolls as if they are children.

The senior monk Phra Payom Kalayano of Wat Suan Kaew, interviewed by channel 3 on Tuesday, lashed out at raising angel dolls as if they are children, as un-Buddhist superstitious behaviour.

The monk likened the angel doll craze to the Jatukam amulet fad which has now completely disappeared after reaching great heights of popularity.

The critical monk suggested donating angel dolls to the government to help them magically export the surplus rubber they are buying at above market prices which would be of great service to poor rubber growers and the nation.

Many dismiss the dolls as driving people even deeper into superstition.

Monks should teach doll owners the words of the Lord Buddha to make their lives more useful to society, their family and friends, in short, to rescue them from their fantasy world and bring them back to the real world, some who are critical of the dolls say.

Others have suggested tongue-in-cheek that if there was ever a revolution, angel doll owners would be the first to face the firing squad, perhaps because they waste money that would be better spent on raising poor children and providing them with an education.

SO WHERE DO THE DOLLS COME FROM?

What remains more mystifying is where the dolls actually come from.

Many people claim to be the originator of angel child dolls.

One of those is 49-year-old Mananya Boonme (see video below), who has worked as a fortune-teller and a spiritual medium for more than a decade and says she used a doll which she named "Nong Petch" and treated it as if she was her own daughter, as a tool to keep her headstrong son disciplined.


IT ALL STARTED WHEN I GAVE THE DOLL A SHOWER

"I started by giving her a shower," Mananya said. "Then one day she appeared in my dream and told me she was going to help me earn money.

Before long, Mananya was approached by a number of faithful followers whom she refers to as her "students".

With word of mouth, what started off as a rather small group turned into a popular and flourishing business.

Now, her house in Nonthaburi has been transformed into a showroom and factory filled with hundreds of dolls, welcoming people who come from all over the country.

The first step is for customers to select a style of doll, all of which are stuffed with "special objects" instead of grain, as she had to quit using grain after it became overly imitated.

The most important part takes place upstairs. Details of which, however, Mananya is unable to share, as this is what her makes her angel dolls different from others.

"I make them with my mind," Mananya said. "They come from my imagination. Whether or not a doll is special is entirely up to the person who makes it."

One of the celebrities claiming to have become a "parent" of a doll after Mananya performed her magic is Thanachapan "Bookko" Buranacheewawilai, a well-known DJ.

He performed a test on his doll, vowing that he would believe in the power of the doll if it gave him good luck and helped him ace his job interview and get a job.

He got the job.

Not convinced, he tried it again and again and each time he got the job.

"At first I thought it was a coincidence," he said. "But I tried it a few times, and when it kept happening, I believed it was the doll."

Some compare angel dolls with the ancient and more eerie looking, kuman thong or "ghost child" dolls blessed by shamans or sorcerers that have supernatural powers also.

While kuman thong dolls are associated with rural beliefs and ancient mysticism, angel dolls are thoroughly modern, urban and middle-class in nature.

"Kuman thong is blessed by black magic, and some houses do that to luk thep too," says one doll business owner at sanook.com. "But it's wrong. Luk thep are fed by good deeds."

"Those who keep them have to make merit and perform good things to please the children. It's a strategy to convince people to do good."

However, there are also many people who remain sceptical and have been pouring scorn on the dolls.

Mananya, doesn't concern herself with them and she believes they "don't have anything better to do with their lives."

"They would say that these are ghost dolls. We have never done anything to hurt anyone or take their money. It's not illegal. It's a good thing, not a bad thing."

Believing it's her right to believe is Pantira (not her real name) a 37-year-old housewife who has a seven-year-old daughter.

Apart from her human daughter, she has another two daughters, named Angel and Sofia, which she has been carrying around with her, shopping and running errands, for over a year.

They have their own crib and she likes to feed them Pocky chocolate sticks.

"It's a personal right and I choose to believe it a lot," Pantira said. "For me, I have enough reason to believe. I'm not over the top. I can afford it." 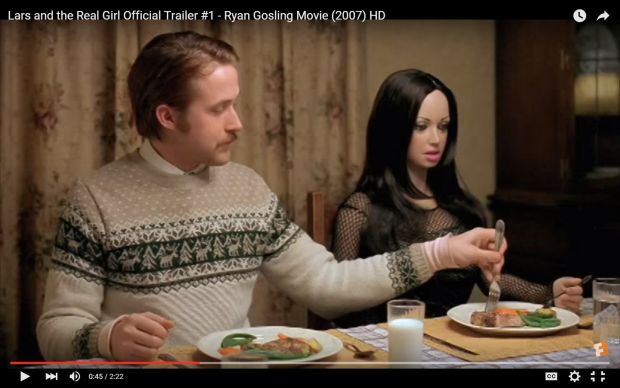 Scene from Lars and the Real Girl in which Lars sits with his doll wife who eats dinner as a flesh-and-blood human (Source: YouTube)

DO FARANG HAVE ANGEL DOLLS?

There have been doll crazes in the US such as the Beanie Babies craze of the 1990s but the dolls were not treated as humans.

Lars and the Real Girl is a 2007 American-Canadian comedy film starring Ryan Gosling which follows Lars (Gosling), a sweet but socially inept young man who develops a romantic yet platonic relationship with a human doll.

The people around Lars grow as they accept his doll as human to please him and eventually help him through his crisis.

The film received favorable movie reviews from Christian faith-based media and was even recommended as an instructional tool and a means for opening a dialogue on tolerance (see here).