"I'd never thought, even for a second, of fleeing and sipping wine on a yacht," Chuwit declared unlike those who flee the country before their sentences are read.

Chuvit gets 2-years in jail after pleading guilty

Chuvit Kamolvisit, 55, and 65 others were sentenced to two years in jail each without suspension by the Supreme Court Thursday for the demolition of bars and shops on a Sukhumvit Square night strip in 2003.

In late 2005, the land was turned into Chuvit Park, a public park personally funded by Chuvit.

Chuvit said he had bought the land in 2002 and planned to build a four-star hotel there but had problems with existing tenants.

On Jan 28, the massage parlour tycoon turned politician arrived at the court at 10am, accompanied by his wife and son.

He paid respect to a Buddha image in front of the Bangkok South Criminal Court and said he was ready to accept any ruling to set a precedent for other politicians and the general public.

"I'd never thought, even for a second, of fleeing and sipping wine on a yacht," he told reporters before entering the court to hear the sentence.

Chuvit Kamolvisit is escorted to hear the Supreme Court ruling on a case involving forceful demolition of Sukhumvit Soi 10 beer bars and shops in 2003 at the South Bangkok Criminal Court on Thursday. (Photo by Pawat Laupaisarntaksin)

The ruling was finally read today after two previous reschedulings when four defendants facing punishment failed to show up.

Those facing possible punishment included a military officer involved in the demolition, a Major Thanyathep, formerly of the 11th Infantry Battalion.

On Oct 15 Chuvit surprised everyone by pleading guilty after having been found guilty in the past by a court. Chuwit said he would accept the verdict today and not seek royal pardon.

The strategy of confessing guilt appears to have worked because Chuvit's 5-year sentence was reduced to 2-years.

FACTS OF THE CASE

Chuvit and 65 other defendants were found guilty of hiring people (thugs) to damage people's property, trespassing at night and unlawful detention during the demolition of shops 13 years ago. 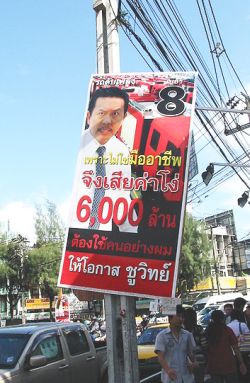 Chuvit on one of his campaign posters as the angry no-nonsense graft buster (Source: Wikipedia)

Prathuang Srisuk, then 23, who resided in one of the shops, argued with the men and was hit on the left ear and injured.

Forty-two of the 44 owners of the demolished shops filed a complaint against Chuvit and 130 others, accusing them of trespassing and damaging property as well as forcefully detaining a person.

After a three-year trial, the Bangkok Southern Criminal Court on July 13, 2006 acquitted all defendants except Chuvit's lawyer, Charnwet Malaibucha, who was sentenced to eight months in jail.

On Sept 11, 2012 the Appeals Court found 66 defendants guilty of damaging people's property and handed a five-year sentence to 60 defendants, including Chuvit and Maj Thanyathep Thammathorn and imprisoned six others for three years and four months.

The 66 defendants then appealed to the Supreme Court which delivered its final verdict today.

After giving up his life as a major massage parlour tycoon, Chuwit created a no-nonsense graft-busting persona for himself .

He then entered public life and won a seat in parliament in 2005, founded the Rak Thailand Party and continued to expose police corruption focusing mostly on gambling dens.