Dr Dolrudee is reportedly a naturalised US citizen, married, and can't be touched directly by Thai civil law, but apparently she can be declared bankrupt in Thailand so any property here can be confiscated (Photos from social media)

Of 5,000 state scholarship, only Dolrudee Jumlongras breached her loan agreement, leaving her guarantors to pay. She has contacted them again, saying she will eventually repay her debt.

Former dentistry lecturer at Mahidol University Dolrudee Jumlongras is the only one among 5,000 state scholarship grantees who breached her scholarship contract and left the burden of paying off the debt to her guarantors.

According to Arporn Kaenwong, secretary-general of the Office of the Higher Education Commission (Ohec), only 23 out of the 5,000 scholarship recipients between 1992 and 2005 did not eventually return to Thailand.

In 1993, Dr Dolrudee, better known as Dr Porsche in the United States, won a scholarship to study a Master's degree and PhD at Harvard University. "But only in Dr Dolrudee's case did the guarantors have to pay off the debt for the recipient," Ms Arporn said.

Unlike Dr Dolrudee, most other recipients who chose not to come back to Thailand found better jobs abroad and they agreed to repay three times the scholarship debt as stipulated in the contract, she said.

One of the guarantors stuck with the bill for runaway dentist Dolrudee Jumlongras' unpaid 30 million baht student loan said on Wednesday she had sent a new email from the United States promising yet again to repay the money.

He said Ms Dolrudee had sent an email to another guarantor insisting that she had every intention to  repay them, as she had repeatedly promised previously.

Mr Padet said Ms Dolrudee sent this email: "As I mentioned to you, P'Pui, P'Padet and Aj Araya several times that I will pay all of you the loan you got plus interest. I'm still looking for a way to find the money to pay you and perhaps, it may be better that you hear it directly from me so that you can be reassured that I will do it as I promise?"

The message also said, "I just talked to P'Pui and she's aware of my intention and sincerity. Please give me the best number and time for me to call you."

Mahidol University and the Office of the Higher Education Commission (Ohec) are planning to file a lawsuit to have its former dentistry lecturer, Dolrudee Jumlongras, declared bankrupt, in order to help collect her scholarship debt.

Banchong Mahaisavariya, vice-president of Mahidol University, said at a press conference Tuesday that he is discussing with Ohec about using legal means to force her into bankruptcy before the 10-year statute of limitations expires on Feb 14 this year. 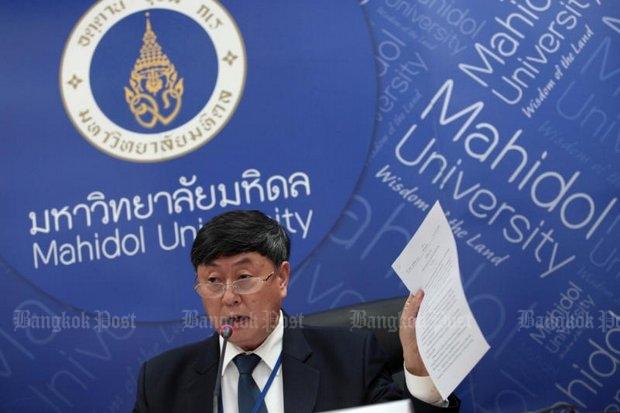 Dr Dolrudee is now a US citizen having married and settled down in the US. This puts her beyond the reach of Thai law, Dr Banchong said.

"Under Thai law, if Dr Dolrudee is not bankrupt, we are unable to take legal action, seize her property or even ask the Immigration Office to help screen for her at airports in case she returns to Thailand. All we can do is file a civil lawsuit and follow legal procedures," he said.

Dr Dolrudee, who allegedly breached her state scholarship contract and left a 30-million-baht debt with her guarantors, currently works at Harvard University.

Dr Dolrudee's four guarantors for her Master's degree and PhD at Harvard over a period of 10 years from 1993 have already cleared a 10-million-baht debt negotiated with the Comptroller General's Department. Dr Banchong said that Dr Dolrudee remains fully responsible for the entire scholarship debt of 30 million baht.

Although Dr Dolrudee's case is worth 30 million baht, Ohec and Mahidol University helped the guarantors by securing court permission to reduce the debt by two-thirds.

"Dr Dolrudee cannot zigzag or avoid her karma by just paying 10 million back to her guarantors. She must pay back the full amount of the scholarship," Dr Banchong said.

Passiri Nisalak, Dean of the Faculty of Dentistry at Mahidol University, insisted the institution has done all it can to reclaim the 30-million-baht debt and bring Dr Dolrudee to account.

Asked why the Faculty of Dentistry approved Dr Dolrudee's resignation back in 2004 when she had not yet repaid her scholarship, Dr Passiri explained that according to the Civil Service Act, BE 2551, the faculty cannot stop staff resigning because they breached a scholarship contract.

"The university and the faculty have sent many collection letters to Dr Dolrudee both in Thailand and in the US, but she replied that she was not yet ready to make payments. She also complained about the unfair criteria of the scholarship," Dr Passiri said.

"We also wrote to Harvard asking them to investigate the issue and consider appropriate action, but they just replied that they are treating this case as a private matter," he added.

"I was recently told by one guarantor that Dr Dolrudee contacted him a few days ago. She asked him if there was anything she can do to help, so he told her to transfer the money back to all guarantors, but she said she still cannot pay the debt at this time," Dr Passiri noted.

You can see our previous coverage of this story here: http://www.bangkokpost.com/learning/learning-from-news/847336/friends-forced-to-pay-rich-dentist-scholarship-bill