These urban students are likely to do far better in national tests than their rural counterparts where teachers and facilities are lacking. PATTARAPONG CHATPATTARASILL

Mathayom 6 (Grade 12) students failed eight out of nine subjects on average in the 2016 national tests. Something needs to be done, but unclear data is making the task more difficult.

The persistent failing of core subject examinations by Thai students, despite higher budgets every year, reflects glaring discrepancies in the country’s education, according to specialists.

The results of the 2016 national tests in nine core subjects for Mathayom 6 (Grade 12) students organised by the National Institute of Educational Testing Service (Niets) show that Thai students failed eight out of nine subjects on average.

Of nine core subjects, each comprising a total of 100 marks, Thai had the highest average score at 56.65, while the mean results for the other eight subjects — Social Science, English, Chemistry, Physics, Biology, Mathematics 1, Mathematics 2 and General Sciences — were less than 50.

The last two subjects were introduced in the tests for the first time this year, increasing the subjects to nine from seven in previous years.

A total of 179,968 students participated in the tests. 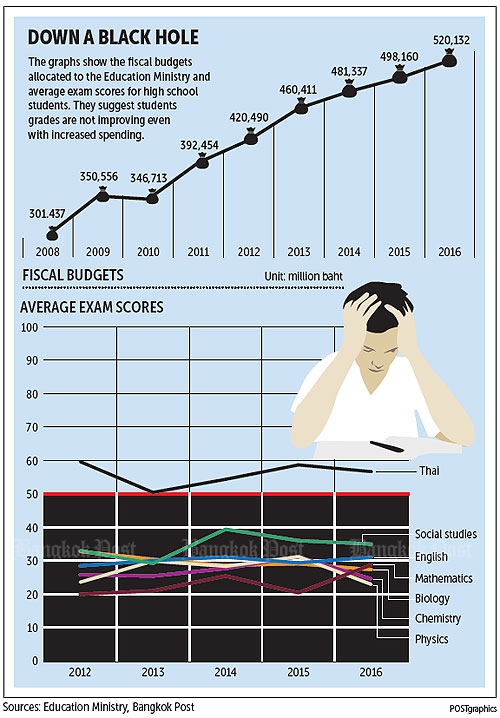 Sompong Jitradup, a lecturer at Chulalongkorn University's faculty of education, said the exams for the nine core subjects were designed to evaluate students who applied for admission at 27 universities nationwide.

Since the universities consider applicants based on their scores for admission, the exam is considered one of the most important and difficult tests.

"Students who have never used tutorial services would find the exam too difficult for them to finish within two hours. I think most students just guessed the answers they did not know," Mr Sompong said.

Still, Mr Sompong said the public should not jump to the conclusion that the competence of all Thai students is poor based on these test results as some students also got perfect scores in several subjects while very few got zeros in the tests.

"In my opinion, I think we should not pay much attention to the average scores of the tests of the nine subjects as they may not reflect the true performance of Thai students," Mr Sompong said.

"Most concerns arising from the exam results are about the inequality and discrepancies in the Thai education system as this can be seen by the wide gap between the scores of urban and rural students," he said.

According to World Bank data, the level of knowledge among rural students in Thailand is about three years behind students in urban areas due to the lack of qualified teachers and because rural students cannot pay for private tutors.

Amornvit Nakornthap, an education academic and former spokesman of the Education Ministry, said revealing just the average scores in nine core subjects is quite useless. 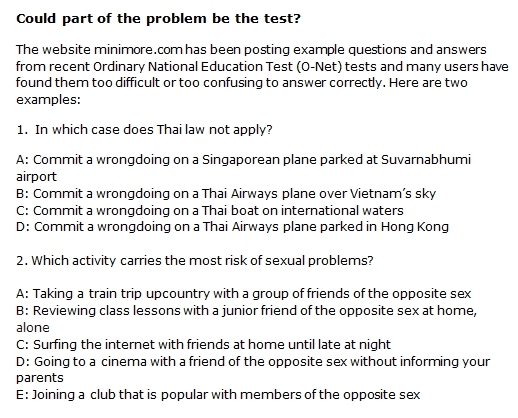 He suggested that Niets classify the scores according to area or the size of the school.

The poor scores are believed to be from small schools mostly in rural areas while most students in urban areas and from leading schools are believed to have got higher scores, Mr Amornvit said.

"The inequality in the education system is the biggest issue,” he said.

The scores should be clearly classified between urban students, rural students, students at leading schools and students at small schools so the data can be much more useful, he said.

"If we know in which specific areas students have problems, the government can use its resources and budget to target those places. But the data we have got today is quite useless," he said.

Mr Amornvit said Thailand at present has about 15,000 smaller schools in rural areas that have less than 120 students each.

Most teachers in such smaller schools usually only spend about two years teaching before submitting requests to be transferred to more developed areas.