Scientists are calling the detection of gravitational waves, confirming Einstein's 100-year-old theory, as being as important as Galileo's invention of the telescope.

Scientists are busy this morning trying to explain to ordinary people what gravitational waves are, how they were discovered and detected, and why they are important. It isn't easy.

I'll begin with a little news, but then I'll add a Science Magazine video that is really helpful for even a very basic understanding of gravitional waves. First the news from AFP. 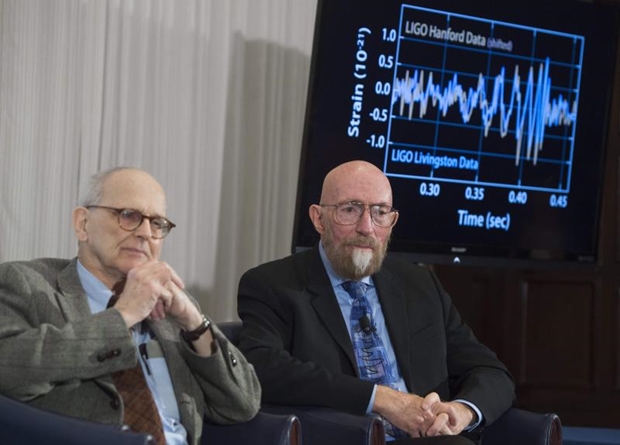 LIGO co-founders Kip Thorne (R), and Rainer Weiss (L), speak about their discovery showing the ripples in the fabric of space-time called gravitational waves that scientists have observed for the first time, confirming a prediction of Albert Einstein's theory of relativity, during a press conference at the National Press Club in Washington, DC, February 11, 2016. AFP / SAUL LOEB

Washington, Feb 11, 2016 AFP – In a landmark discovery for physics and astronomy, scientists said Thursday they have glimpsed the first direct evidence of gravitational waves, ripples in the fabric of space-time that Albert Einstein predicted a century ago.

When two black holes collided some 1.3 billion years ago, the joining of those two great masses sent forth a wobble that hurtled through space and reached Earth on September 14, 2015, when it was picked up by sophisticated instruments, researchers announced.

"Up until now we have been deaf to gravitational waves, but today, we are able to hear them," said David Reitze, executive director of the LIGO Laboratory, at a packed press conference in the US capital.

Reitze and colleagues compared the magnitude of the discovery to Galileo's use of the telescope four centuries ago to open the era of modern astronomy. 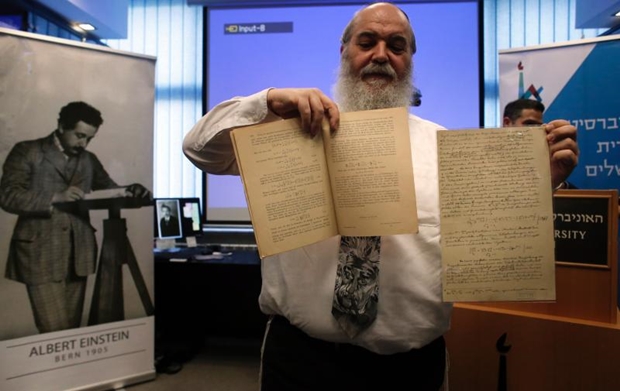 The phenomenon was observed by two US-based underground detectors, designed to pick up tiny vibrations from passing gravitational waves, a project known as the Laser Interferometer Gravitational-wave Observatory, or LIGO.

It took scientists months to verify their data and put it through a process of peer-review before announcing it on Thursday, marking the culmination of decades of efforts by teams around the world including some 1,000 scientists from 16 countries, according to the National Science Foundation, which funded the research.

It's the discovery of a lifetime: Physicists have spotted gravitational waves, churned up by two black holes, locked in a death spiral deep in space. No one has seen such waves before. And they are about to open new eyes on the cosmos.

Until now, scientists have learned about the universe mainly by studying light and other electromagnetic waves from space. But gravitational waves are ripples in space itself. They are set off by stellar cataclysms – such as massive neutron stars or black holes whirling together.

To sense the waves, physicists use massive L-shaped optical devices called interferometers. Each arm of the L is 4 kilometers long. There are two of these devices in the United States. And together, they make up "LIGO".

To detect the stretching of space, LIGO uses laser light to measure and compare the lengths of the two arms. When a gravitational wave ripples past, it will stretch the arms by different amounts, causing the light to warble out of the interferometer. The measurements are sensitive – to within 1/10,000 the width of a proton.

Physicists hope to use the waves to test Albert Einstein's theory of gravity and also to detect strange objects that until now were completely invisible.

Take the signal that LIGO detected. The black holes responsible are three times as massive as normal – and nobody knows why. It's just the first suprise from what promises to be a whole new type of astronomy.

Video: World Science Festival also has a slightly longer and more detailed video with excellent animations. The animations alone will add a lot to your understanding.