Reporters and photographers go 30 metres underground to see the progress in the construction of a new giant tunnel under the Bang Sue canal linking Lat Phrao canal and the Chao Phraya River. (Photos by Tawatchai Kemgumnerd)

About a year from now, a large part of Bangkok won't need to rely on its outdated drainage system as a massive underground tunnel comes on line. 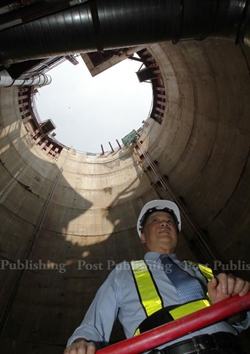 The construction of the 6.4-km tunnel, linking Lat Phrao canal and the Chao Phraya River, is now more than 46% complete. The work is currently ahead of schedule and, with this progress, residents and motorists on crowded streets will breathe a sigh of relief when the tunnel helps to solve flooding problems, he said.

The tunnel, which can carry water to the river at a rate of 60 cu/m a second, will improve the drainage speed which is currently slow due to the city’s smaller sewers which cannot effectively deal with rainwater of more than 60 millimetres per hour.

Once the 2.4-billion-baht tunnel, which will be laid under the Bang Sue canal, is completed, six flood-prone areas covering 56 sq/km will benefit, MR Sukhumbhand said.

A pumping station is being built at the end of the 5-metre diameter tunnel that meets the Chao Phraya River in the Kiakkai area, MR Sukhumbhand said.

The governor on Friday conducted an inspection of part of the tunnel under Kamphaeng Phet Road. A lift took him 30 metres down to the tunnel through which he took a tram along its 700-metre section.

Construction workers are working around the clock, gradually extending the tunnel by 15 metres each day, MR Sukhumbhand said. 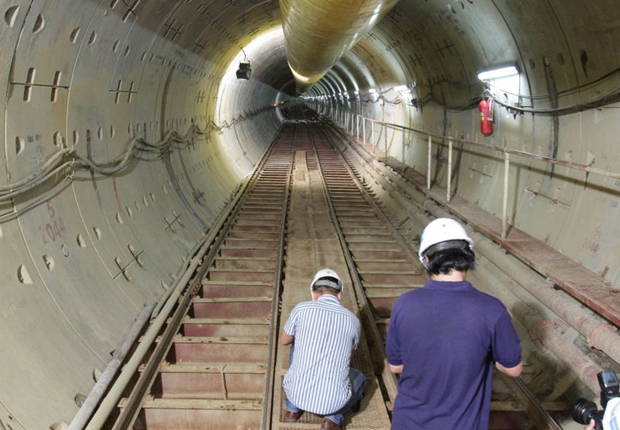 A look inside the tunnel.

As the tunnel's completion is about a year away, City Hall must rely on conventional methods to tackle floods this year.

“We are preparing to dredge sewers to make them more efficient in draining water and installing water pumps,” MR Sukhumbhand said. In the long term Bangkok still needs a larger sewer system to replace its ageing one, he said.