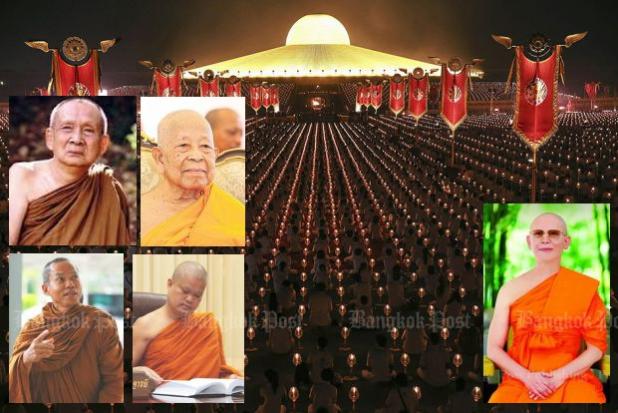 As two feuding camps clash over the nomination of the new supreme patriarch, the government has been caught in the crossfire.

An ugly scuffle broke out last month between monks and soldiers at Phutthamonthon Buddhist park when about 1,200 monks and their supporters, led by Phra Methee Dhammacharn in his capacity as secretary-general of the Buddhism Protection Centre of Thailand, gathered to demand the government expedite the appointment of the new Supreme Patriarch.

Somdet Phra Maha Ratchamangalacharn, or Somdet Chuang, the abbot of Wat Pak Nam Phasi Charoen, is the most senior of the eight candidates for supreme patriarch, chief of the governing body of the country’s 300,000 Buddhist monks.

However, some groups have cast doubt on Somdet Chuang’s suitability, accusing him of having a close relationship with the controversial abbot of Wat Phra Dhammakaya, Phra Dhammachayo, whom he mentored when Phra Dhammachayo was ordained in 1969.

He is also seen as having close close ties to the Thaksin Shinawatra political network.

In the opposition camp is Phra Buddha Isara, the abbot of Wat O Noi, who was an activist monk leading protesters to oust the Yingluck Shinawatra administration before the coup.

He submitted a list to the prime minister of 300,000 people who oppose the nomination of Somdet Chuang and urged a probe into Wat Pak Nam's vintage car collection.

In what way is Somdet Chuang closely connected with Wat Dhammakaya and why would this have a negative effect on his nomination?

He is Phra Dhammachayo’s [abbot of Wat Dhammakaya] preceptor.

It’s not wrong if Dhammachayo acts according to Buddhist discipline. But that is not the case. Recently, Wat Dhammakaya introduced yet another "sculpture of heaven" — the hammers they sell for 100,000-200,000 baht.

As SSC chairman, has Somdet Chuang ever mentioned that he would punish those who broke Buddhist discipline? No. That is the equivalent of making a bandit leader a monk leader. How can we accept that?

Why do you call Somdet Chuang a bandit leader?

At this time, everyone in the world knows that Dhammachayo is charged with the embezzlement of funds from a credit union cooperative (very close in form and function to a commercial bank) and money laundering (see today's verdict in breaking news here).

If this is not a bandit leader, then what is it?

Has Somdet Chuang ever questioned his disciples (followers) on this? Never.

So if in the future there is embezzlement involving temples, will Somdet Chuang dare to use his authority to question them?

We will not have a tainted person as supreme patriarch.

If Somdet Chuang’s behaviour has been inappropriate as you suggest, why did the SSC nominate him as the new supreme patriarch in January last year?

The Sangha Supreme Council (SSC) is under the power of Wat Dhammakaya and Somdet Chuang.

There are only a few SSC members who do not go to Dhammakaya temple.

Dhammakaya exists in every inch of Thai society.

They purchase land in districts with a high income per person in order to expand their power and kingdom, as well as to support political groups.

Political groups that wish to come into power can contact the Dhammakaya cult because they have a powerful grip over society.

Where does Wat Dhammakaya gain its wealth from?

If you look at government expenditure, some of it is sent to Wat Dhammakaya. This has happened since the Thaksin administration and until Yingluck.

Part of it is from donations, obtained by fooling people. Their most recent creation is the heavenly sculptures.

Since they dominate society, the economy and politics, they are able to expand their power to distort Buddhist teachings.

While the Buddha asks us to sacrifice in order to lower selfishness, Dhammakaya tells us that the more we donate, the wealthier we get.

Is the SSC aware of this?

Sangha Supreme Council (SSC) members sleep and eat at the Dhammakaya temple, so how can they not know?

Over half the committee members are followers of Dhammakaya and receive money from Dhammakaya.

Does that mean Buddhism in Thailand has deteriorated?

Buddhism has not deteriorated.

What has deteriorated is the individual.

And it is because it is so bad that I have to protest.

Somdet Phra Nyanasamvara (the late Supreme Patriarch) met with me several times to discuss these problems that he was not able to act upon at the time due to the political powers supporting Dhammakaya.

Which political group are you referring to?

Everyone knows that Dhammakaya is Thaksin’s political tool.

Everyone knows that Dhammakaya is the Shinawatra family’s political tool.

Everyone knows that some monks are under the power of the Shinawatra family.

You must not forget that before Thaksin became prime minister, abbots received a monthly salary of only 500 baht. When Thaksin became prime minister, it rose to over 1,000 baht. SSC members were given more than 30,000 baht per month, up from over 10,000 baht. If it were you, who would you choose? Thaksin has long planned to buy the country and religion. Society must realise this truth.

If not Somdet Chuang, who do you think would be a suitable candidate for Supreme Patriarch?

Anyone who does not taint the Buddhist discipline.

Do you think the dispute over the nomination of the supreme patriarch is politically motivated?

The other side — whether it is the United Front for Democracy Against Dictatorship (UDD) and its leader Jatuporn Prompan, the red shirts or Dr Weng Tojirakarn — is pushing forward with this issue.

So why are they pushing for Dhammakaya and Somdet Chuang to gain authority?

We are not thinking of using religion as a political tool because I have never supported any political party.

It’s only their side using religion as a political tool because those people clearly appeared at protests showing support for a political party.

But in the past you played a key role in the People’s Democratic Reform Committee’s rallies against the Yingluck Shinawatra administration.

I also protested against Thaksin because he was corrupt. He damaged religion, society and the monarchy. And it’s not just me — anyone in Thailand who feels grateful towards the country has a right to protest [against Thaksin].

But you need to understand that I did not drive him out because I wanted power, or for the power to fall into the hands of a particular group of politicians. Whoever says that I am politically motivated, that is a misunderstanding. It’s the other side, not me.

What will happen if Somdet Chuang is appointed new supreme patriarch?

I think there will be chaos. The polls say 70% do not support Somdet Chuang as the supreme patriarch. If the total number of monks nationwide is 300,000 as claimed, how much is that compared to 70% of Buddhists? But the number [of his supporters] might be larger if you add members of the UDD.

Does the prime minister appear reluctant to act?

He doesn’t want this issue to turn into something abnormal. I think he is letting it take its natural course according to legal procedures.

But it’s not natural in terms of discipline because the mechanism and those who enforce the discipline are disabled. This includes the SSC, the National Office of Buddhism (NOB) and senior monks.

How do you think this problem should be solved?

Lay down the tripitaka (Buddhist sacred scriptures) right in front of each monk, open it page by page, and defrock any monk who acts against Buddhist teachings.

But don’t forget that Dhammakaya has its own tripitaka, which they twice tried to get approved by the Sangha Supreme Council (SSC).

I have heard that Dhammakaya is even sneaking its own people into the National Reform Council (NRC) to approve a bill on reforming the clergy. This includes the National Office of Buddhism (NOB), which has always attempted to protect Dhammakaya.

Click "play" to listen to Showdown over Supreme Patriarch and "Download" to keep this file for educational purpose.