Prime Minister Prayut Chan-o-cha has introduced "Echo English", a mobile app intended for Thais to practise their English with native speakers. Meanwhile, 350 teachers are in a 5-week English-only camp run by the British Council.

As of early this morning, I, and others, could not find the "Echo English" app in the Google Play store. If you find it, let's us know via Facebook so we can check it out.

Prime Minister Prayut Chan-o-cha has introduced the first version of Echo English, a mobile application intended for Thais to practise their English with native speakers.

"We made this app because we want Thais to practise speaking English. Do not fear farang because they are ready to understand us," Gen Prayut said. THANARAK KHUNTON

Gen Prayut said the Education Ministry was responsible for creating the app, which he hopes will boost English competency so Thais can compete in the Asean Economic Community.

"We made this app because we want Thais to practise speaking English. Do not fear farang because they are ready to understand us," Gen Prayut said.

The premier said most schools focus on teaching English grammar, with the learning largely bookish and repetitive, leaving students unprepared when having to communicate in more practical situations.

Gen Prayut said the best ways for Thais to improve their English is watching movies in English, reading English books and speaking the language as often as possible until they get used to it.

"I admit I am not good at English but I try to speak it. When I travel overseas, I have an interpreter to help me because the language must be correct. 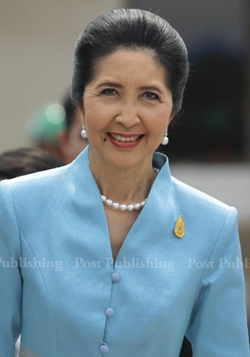 The prime minister's wife, 62-year-old Associate Prof Naraporn Chan-o-cha, is a long-time English teacher who is completely fluent in the language. PATIPAT JANTHONG

"Though my wife is an English language teacher and she has taught me, I speak very little of the language," he said.

Education Minister Dapong Ratanasuwan said Echo English, a free app, is played like a game and has multiple-choice questions.

He said it will help Thais learn conversational English.

He added that there are four versions of the app; the first version, launched Tuesday at Government House, is designed for the general public.

The version is available to download on Android devices and will be available on Apple devices by the end of this month.

He said there are currently about 40 English lessons, which by the end of this month will expand to about 200 and will allow 20,000 users to play simultaneously.

Gen Dapong said the second, third and fourth versions of the app are in the process of development. The second version will be designed for students and teachers.

The next one will be designed for various professions such as people in the tourism industry, engineers and technicians, while the last version will be for government officials, he added.

The Education Ministry on Monday launched a five-week boot camp for Thais teaching English or the so-called "train-the-trainer" programme for the first group of 350 teachers in state-run schools nationwide.

Deputy Education Minister Teerakiat Jareonsettasin, who oversees the programme, said the teachers will be trained by 30 British Council English specialists who are all native speakers to boost their confidence in English.

"The 350 teachers will live in what we call an immersive environment for 37 days, speaking, listening, reading and writing only in English with native speakers," he said.

Dr Teerakiat said the training aims to improve the teachers' proficiency in the language and their teaching techniques as English lessons in Thai schools focus mainly on grammar and vocabulary, with a lesser focus on communication or creating a supportive learning environment.

Before expecting better English skills from Thai students, the ministry must first improve its teachers' English skills and their method of teaching, he added.

Earlier, the ministry conducted a survey on the capability of Thai English-language teachers across the country and found only six out of more than 43,000 teachers in public schools can achieve native-like fluency or C2 level in the Common European Framework of Reference for Languages (CEF).

Dr Teerakiat said the 350 teachers attending the programme have been selected from across the country according to their CEF test scores – B2 (upper intermediate level) and above – and are required to be under the age of 40.

After the training, the ministry will select the 50 teachers who did best in the course to become trainers for the next group of teachers undergoing the programme.

The remaining 300 teachers will be sent to teach at their schools.

These teachers will be closely monitored by the ministry for one school term before assessing whether their teaching has improved students' English language skills as hoped, he said.