The Criminal Court yesterday sentenced the former chairman of the Klongchan Credit Union Cooperative (KCUC), Supachai Srisupa-aksorn, to 16 years in jail, the first such ruling in seven cases connected to the cooperative scandal.

Supachai pleaded guilty in court to charges of embezzlement, which he initially denied during police interrogation.

Due to his confession the judge reduced his sentence to 16 years from what would have been 32 years.

Supachai, 58, was taken to court from the Bangkok Remand Prison, where he had been detained and denied bail since April 2 for his role in the KCUC embezzlement scandal.

According to prosecutors, Supachai, on behalf of the cooperative's caretaker manager at the time, ordered staff to withdraw money from the company's bank accounts eight times from April 10 to Oct 8, 2013.

He then transferred the money into his own accounts and others', siphoning off, in total, 22.1 million baht.

Yesterday's case was the first of seven being handled by the Department of Special Investigation (DSI) in which a sentence was passed. Three of the 12-billion-baht in scandal cases involve embezzlement, another three money laundering and the other one public fraud.

KCUC lured customers into depositing money with the cooperative by presenting healthy annual figures showing it had been making solid profits, when in actual fact it had suffered losses stretching from 2009-2012. 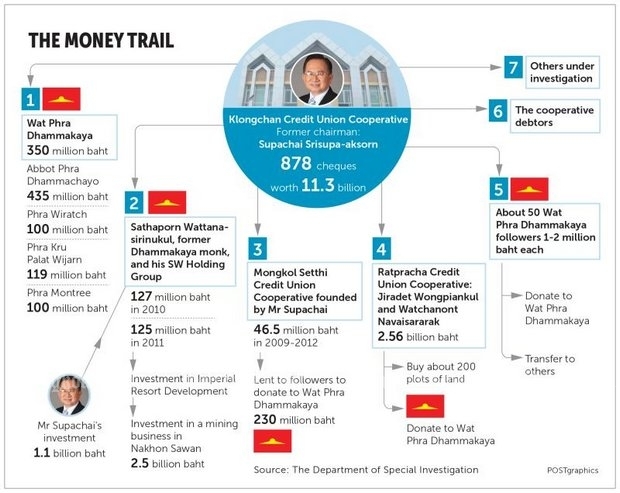