Police have cited negligence as one possible cause of a deadly accident at the head office of Siam Commercial Bank in the capital on Sunday night. Meanwhile, two arrest warrants have been approved

During the installation work there was a leak of fire-retardant chemicals that killed eight people and hospitalised seven others on Sunday night.

He believed the two would report to Phahon Yothin police on Tuesday morning to hear the charges and be questioned.

Police would today continue compiling evidence to support applications for court warrants to arrest other people who were also involved, he added.

Language note. The accident happened in the past, but will still don't now the exact cause. As you read, notice the verb forms used when speculating about the case, e.g., may have triggered, might have activated, could have caused.

Today's audio can be found at the bottom of the page.

Police have cited negligence as one possible cause of a deadly accident at the head office of Siam Commercial Bank (SCB) in the capital on Sunday night.

Eight people died and seven were injured after a fire extinguishing device released pyrogen aerosol gas in a document security vault in the basement of SCB Park Building on Ratchadaphisek Road. The chemical is intended to deplete oxygen, which possibly caused their deaths.

Five died at the scene and three others later died in hospital. Of the eight fatalities, seven were employees and one was a security guard. 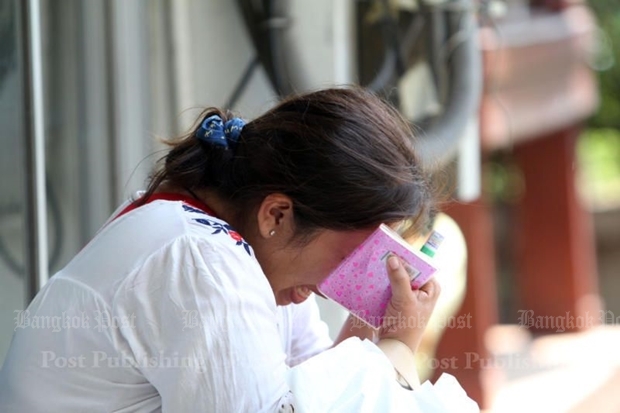 A relatives weeps at the Police General Hospital's Institute of Forensic Medicine after identifying one of eight people killed. SCB said it will offer the families of the dead victims 100,000 baht each, and provide 30,000 baht to help the injured. APICHART JINALUL

The accident occurred about 9.30pm in the basement of SCB's head office as the employees were working to improve the building's chemical fire extinguishing system.

Investigators reported that Mega Planet Co had been contracted to instal the fire prevention system, but another company was subcontracted to complete the work.

The sub-contractor, building designers and safety engineers would also be summoned to testify. He said police will spend about a week gathering evidence before they can establish the cause of the accident.

SCB blamed the accident on the contractors, who had been working to upgrade the building's chemical fire-extinguisher system but mistakenly set it off, releasing a chemical retardant designed to starve any fire of oxygen. "The work may have triggered the pyrogen aerosol which, once it works, will decrease oxygen. That could have caused people's injuries and deaths," the bank said in a statement.

SCB president Yon Phokhasap said the building and other property sustained no damage, adding that an upgrade to the fire extinguishing system is under way, changing from the pyrogen-based system to a nitrogen-based one. 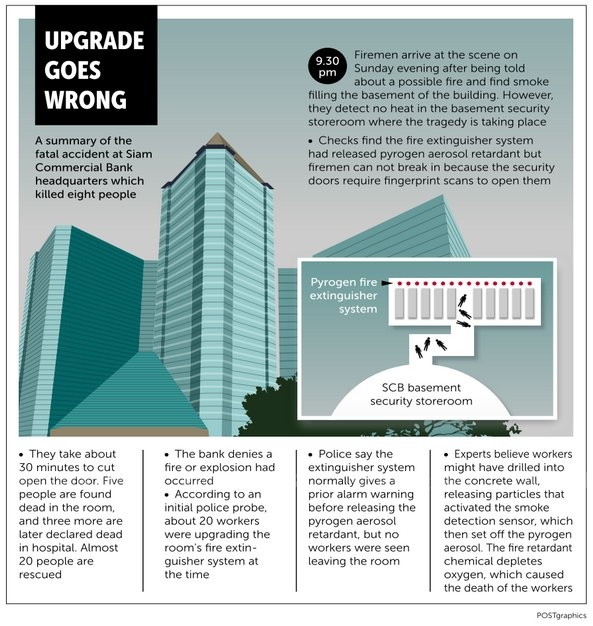 Speaking after inspecting the scene, Pol Lt Col Bundit Pradabsook, vice-president of the Association of Siamese Architects under Royal Patronage, said that workers may have drilled into the concrete wall releasing dust particles during the upgrade work, which might have activated a smoke detection sensor and then set off the pyrogen aerosol. This system is highly sensitive to small dust particles, apart from smoke, he said.

"Why did the fire extinguishing system operate without a fire? Why could the victims not leave the room? And why did it cause deaths when the device producer claims on its website the chemical is not severely toxic and will not eliminate oxygen?" he said.

A fire fighting expert said dust normally does not activate the extinguishing system unless the system itself is faulty. Fire prevention and extinguishing technology which uses pyrogen is very advanced. But it is far more costly to instal than a normal fire hydrant system.

The benefit of the pyrogen-deploying system is that it is an effective and less messy method of dousing fires in a tightly-contained environment, such as a document storage room. It does not cause damage to documents, which commonly occurs with the use of water, according to the expert.

But pyrogen technology can be deadly if people who come into contact with the system, including rescuers, do not know enough about how it works. Rescuers who access a pyrogen-exposed chamber must be equipped with oxygen-supplement tanks. 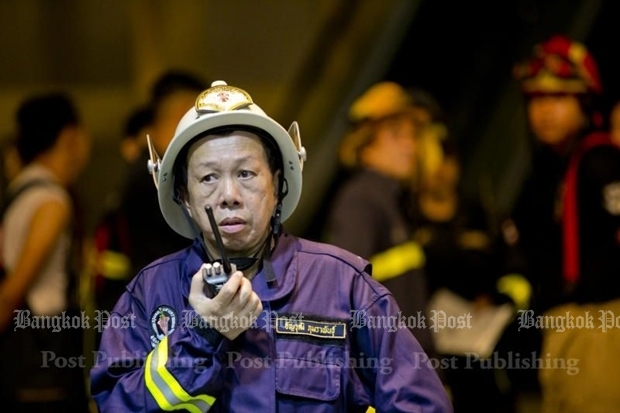 Update: Earlier many sources were quoting the Erawan Emergency Centre as saying 10 had died and seven were injured. By mid-morning that has been revised downward to eight dead and seven injured.

An upgrade to fire prevention went horribly wrong at the headquarters of Siam Commercial Bank Sunday night, and eight people died when chemicals sucked oxygen from the building.

Firemen responding to the alarm were delayed in breaking in while they conducted tests to try to find out if there was a fire but they detected no heat.

Reports said there was smoke coming from the basement of the low-rise building at around 9.30pm Sunday. A bank statement said there was no fire or explosion.

Initial reports said eight people died at the scene and seven were taken to hospitals. 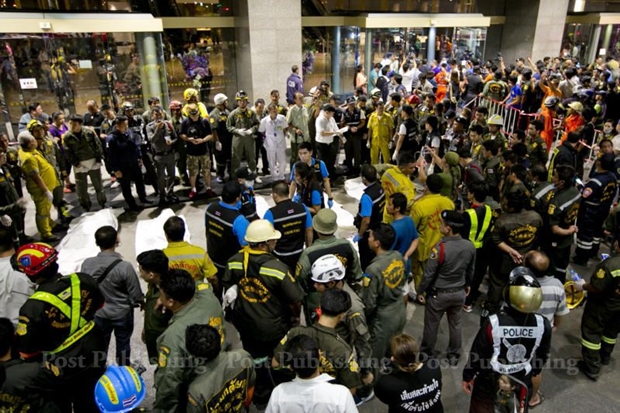 Bodies of victims are laid out in front of the building.

Firemen said when they finally began breaking into the bank building, they found tightly locked doors. They managed to rescue three people on the ground floor but could not access either the basement or first floor.

Within 20 minutes, firemen had pulled out three unconscious victims of the fire retardant, as well as the bodies of a woman and two men already overcome.

Other bodies were found in the next 20 minutes 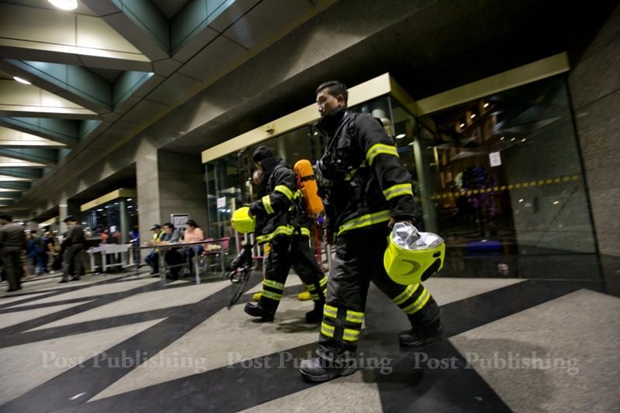 According to an official statement by SCB, this was "an accident caused by the negligence of the contractor hired to improve fire protection in the building". It gave no further details.

The bank issued a press release late Sunday night, saying there was no fire or explosion, so all banking offices would be open on Monday as usual.

The statement added condolences for the victims. The bank's chief executive will hold a press conference on the incident Monday morning.