The burned out remains of the Ford hatchback in which two graduate students died after being hit by a Mercedes-Benz travelling in excess of 150km/hour. CHANAT KATANYU

The driver of a Mercedes-Benz involved in a high-speed crash on Sunday in Ayutthaya that killed two post-graduate students will likely be spared a drink-driving charge, as questions arise about the handling of the investigation.

The driver of a Mercedes-Benz involved in a high-speed crash on Sunday in Ayutthaya that killed two post-graduate students will likely be spared a drink-driving charge, as questions arise about the handling of the investigation.

Janepob Veeraporn, 37, the driver of the Mercedes with Sor Ngor 3333 licence plates, was apparently not tested for drugs and alcohol immediately after the crash, which was recorded by another vehicle's dashcam, and this could see him charged with a lesser offence.

A charge of recklessness causing death is subject to a maximum jail term of 10 years but does not come with a minimum prison sentence, meaning an offender can walk away doing just community service.

A charge of drink-driving causing death, however, calls for a jail term of between three and 10 years.

According to Pol Gen Pongsapat, investigators asked the hospital to take a blood sample from the suspect for an alcohol and drug test, but the suspect refused because he was about to be transferred to another hospital in Bangkok.

Provincial Police Region 1 has replaced the investigation team and also transferred Pol Col Pongpat Suksawat, superintendent of Phra-in Racha police station, and Pol Lt Col Somsak Polpankhang, who was in charge of the case, to the operations centre at the bureau for 15 days. 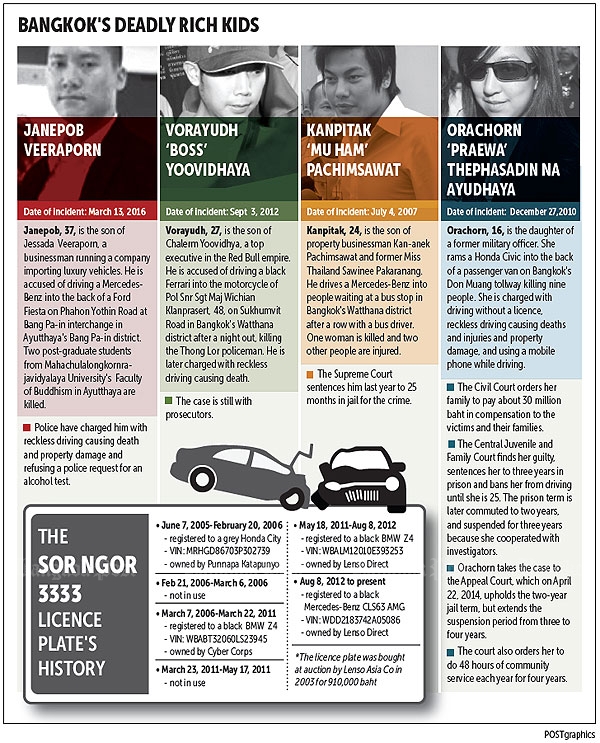 The charred remains of the Ford after it was rear-ended by Mr Janepob's car and burst into flames, killing Kritsana Thaworn, 32, and Thantapat Horsangchai, 34. SOONTHORN PONGPAO (Inset from dashcam footage)

The case of the speeding Mercedes Benz involved in the death of two promising university graduate students has been the hot topic in Thai social media over the past few days, with netizens criticising the police investigation, worried that yet another young man from a rich family would not face punishment.

Our online news team reported last night that senior provincial police in Ayutthaya have now been ordered to take over the investigation. Two panels have been set up, one to deal with the deadly collision and another "to find out why Phra-in Racha police had dithered over the case."

The speeding Benz is caught on a dashcam an instant before colliding with the Ford while travelling at a speed estimated at between 150 - 200km/hour.

A big reason the case has received so much attention is a video clip taken from the dashcam of another car which clearly shows the Benz colliding with a second car at extremely high speed. You can see it here. (The date on the footage is wrong.)

The driver of the Mercedes Benz definitely had a problem Sunday before smashing his car in the sedan. Here is the latest from our online reporters. Watch the third vehicle in the video.

Security camera footage shows that a Mercedes-Benz crashed through the expressway tollgate near Rama 4 plaza about an hour before ramming into a sedan in Bang Pa-In district of Ayutthaya on Sunday, killing two university graduates, according to reports in Thai media.

New TV station aired the footage, which shows a black car driving through the automatic tollgate without waiting for the barrier to lift up, and speeding away.

The toll collector recorded the licence plate number of the vehicle, which matched the plates on the Mercedes-Benz that caused the fatal accident about one hour later, the report said.

A driver yesterday confessed to reckless driving after he allegedly killed two graduate students in a horrific traffic accident in Ayutthaya province on Sunday, police said.

His confession came after more than three hours of questioning by Pol Lt Col Somsak Pholphankhang, inspector at Phra-in Racha police station, at Samitivej Sukhumvit Hospital in Bangkok where he was admitted yesterday.

The suspect regained full consciousness shortly before the interview, he said.

The charge was brought against Mr Janepob after a sedan with two people on board was hit at high speed by Mr Janepob's Mercedes-Benz on Phahon Yothin Road at Bang Pa-in interchange in Bang Pa-in district on Sunday.

Mr Janepob sustained injuries to his knees while the two students died after being trapped inside their vehicle which had been engulfed by flames caused by the collision. 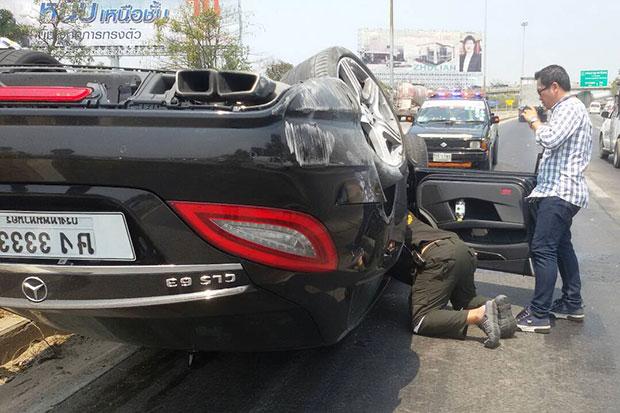 The victims were later identified as Kritsana Thaworn and Thanthaphat Horsaengchai. Both were pursuing Master's degrees at Mahachulalongkornrajavidyalaya University's Faculty of Buddhism in Ayutthaya.

A post-mortem examination was conducted on the victims to determine if the cause of death had been the collision or the ensuing fire.

In Mr Janepob's vehicle, police also found a medicine bag containing Lexapro, a drug used to treat anxiety and depression. Drowsiness is one of the side effects of the drug.

The name of the suspect was found on the medicine bag. The drug was issued by the Somdet Chaopraya Institute of Psychiatry on March 3.

The inspector assured that charges would be brought against Mr Janepob as the collision was captured by cameras from other vehicles that were transiting by the scene of the crash.

Police will also check Mr Janepob's records to determine if he has been involved in any prior traffic incidents. Police were unable to question him earlier as he was receiving treatment in the hospital's intensive care unit.

The station chief said police also coordinated with the hospital to conduct a blood alcohol test on Mr Janepob.

The test was not conducted on the suspect right after the accident as he was injured and needed emergency treatment.

Pol Col Pongphat's explanation came after netizens slammed the initial police investigation, saying the offender could escape justice as he came from a well-to-do family.

Meanwhile, Jessada Veeraporn, the suspect's father who runs the company importing luxury vehicles, admitted his son had been involved in a couple of road accidents before.

Mr Jessada attended funeral rites for both victims to apologise to their families.