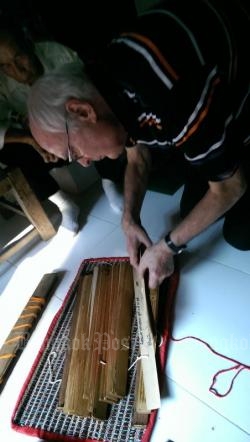 Ancient palm leaf manuscripts are an important part of Thai history and culture.

For hundreds of years before books, people in Thailand recorded important things on the leaves of palm trees and then bundled them together into a book.

These northern Thai (Lanna) palm leaf manuscripts are now available for everyone to read free of charge on their own computer, tablet or even mobile phone.

The new Digital Library of Northern Thai Manuscripts (DLNTM) or lannamanuscripts.net can be found in English here and Thai here).

The Digital Library of Lao Manuscripts is available here.

These ancient palm leaf manuscripts for the first time will now be widely accessible to everyone over the internet.

Northern Thai literature can be studied in its original form by students in schools around the country.

This online library is also a solution to the big problem of disappearing manuscripts.

Over the years, many manuscripts have been destroyed by fires and termites. Manuscripts being borrowed but never returned is another problem.

There are many topics one can read about and study in the new library.

Religion, history, literature and law are the subjects commonly found in the manuscripts.

The North's oldest palm-leaf manuscript is included in the library and dates to 1471. The original manuscript is located at Wat Lai Hin in Lampang. It tells the Jakata stories of Lord Buddha's many previous lives as humans and animals, as well as about the Five Precepts and Eight Precepts of Buddhism.

King Mengrai's law code is the most famous of northern Thai law texts.

Especially interesting are the are so-called Paññāsa Jātaka (Apocryphal Birth Stories, Panyasa Jataka) known in Burma as the Zinme or Chiang Mai Jataka (read paper by Pali scholar Peter Skilling on the different kinds of Jataka here & read some of the Chiang Mai jataka here & an online thesis on them here).

So-called Nissaya (inter-linear translations) have Pali with a Thai or Burmese translation to help monks study the scriptures and prepare sermons for lay people. Pali scholar Justin McDaniel of the University Pennsylvania did his PhD dissertation on this very topic.

Some of the most important histories of northern Thailand were written in Pali.

"The Camadevivamsa (ตำนานจามเทวีวงศ์, Legend of Queen Cama) is a Pali chronicle composed in the early 15th century by the Lanna Buddhist monk Mahathera Bodhiramsi (พระ โพธิรังษี มหาเถระ). The chronicle, dated to c. 1410, is a semi - historical story of the founding of the Mon kingdom of Haripunjaya in the mid-sixth century by Queen Jamadevi and her establishment of a royal lineage destined to rule Haripunchai for the next 500 years. The manuscript ends with King Adittaraja's discovery of a sacred relic of the Buddha in the eleventh century that became central to the Theravadan Buddhist culture of Haripunchai and is still enshrined in Wat Phradhatu Haripunjaya (Wat Phra That Hariphunchai) in present-day Lamphun, Thailand."

The chronicle opens with the story of the Buddha's past visit to Haripunchai and tells about his prophecy that a relic will be found there centuries later by King Adittaraja. Jamadevi, a Mon princess builds a walled, moated city out of the jungle. Jamadevi is made Queen. The chronicle then tells the story of the battles between Jamadevi's new city and the surrounding Lawa ethnic group ending in a victory for Haripunchai. The Lawa were the animist Mon-Khmer people who inhabited the region before the arrival of the Mon. After the victory, Jamadevi arranges for her two sons to marry the two daughters of the defeated Lawa chief, bringing all of the surrounding peoples under the subjugation of Haripunchai (taken from Wikipedia here).

The Jinakālamālī (ชินกาลมาลีปกรณ์; The Sheaf of Garlands of the Epochs of the Conqueror) is a Chiang Mai chronicle written in Pali that is mostly about religious history, and contains a section on early Lan Na kings to 1516/1517.

There are also palm leaf manuscripts in Burmese in the new library because northern Thailand (Lanna) was ruled by the Burmese for hundreds of years.

The palm leaf books of Shans (Tai Yai) will also be found in the library.

The history and literature of the Tai Lue people of what is now Sipsongpanna in Yunnan, China and the Tai Kheun people of the far eastern Shan states in Burma, just north of Maesai, Thailand also have their own chronicles. The Shan scholar Sao Saimong Mengrai translated the Tai Kheun chronicle of Chiang Tung (Keng Tung, Jeng Tung) into English. The French Chiang Mai-based scholar Anatole-Roger Peltier has also done much to preserve Tai Kheun literature (see here & here). You might also like to read a new article about the beautiful golden Shan (Tai Yai) manuscripts in the British Museum here. 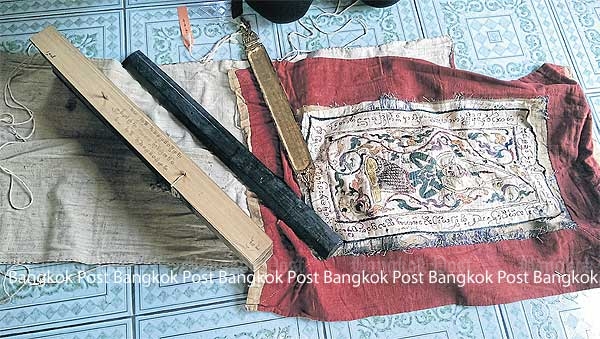 The new digital library consists of a vast collection of manuscripts from northern Thailand, a total of 4,274 manuscripts that are up to 500 years old. More will be added to the library eventually bringing the total to around 7,000 manuscripts.

These digital libraries are the end result of the Preservation of Northern Thai Manuscripts Project (PNTMP) and the subsequent digitisation of manuscripts funded by the German government since 1987 contributing €730,000 in total.

A team led by Prof Hundius microfilmed manuscripts at Wat Sung Men in Phrae in 1987. Currently, Wat Sung Men has a Manuscript Museum and two manuscript libraries for storing the Tipitaka and many other manuscripts. The Manuscript Conservation Association plans to help the temple submit a proposal for listing the temple's palm-leaf manuscripts on the registry of the Unesco's Memory of the World Programme in the future.

These digital libraries are the result of over four decades of hard work by German academic and Pali scholar Prof Harald Hundius.

Back in 1970s, Prof Hundius applied for a scholarship from the German Research Foundation to study Thai manuscripts for three years. He went to the North of Thailand and studied the Lanna language with local scholar Singkha Wannasai, a guru of the northern language, in Lamphun every day. In the third year, he was able to read northern Thai manuscripts.

The first comprehensive survey of Lanna manuscripts in the eight northernmost provinces of Thailand was conducted from 1971 to 1974 by Prof Hundius within a project financed by the German Research Foundation. Prof Hundius was a professor of Thai and Lao languages and literature at the University of Passau, Germany, from 1993 to 2004. He has been implementing manuscript projects at the National Library of Laos since 1992.

"I still remember the sight of 15 northern people sitting at Wat San Rim Ping, unwrapping manuscripts, reading for each other and laughing. I was curious and tried to read the story. Finally, I understood the story after half-a-year. The script was very difficult. I wanted to study more and more," the 77-year-old Prof Hundius recalled.

In 1974, the professor returned to Germany and brought back records of 1,300 manuscripts from Thailand for studies. Between 1982-1985, he helped set up a master's degree programme in the northern language at Chiang Mai University. He initiated and participated in the Preservation of Northern Thai Manuscripts Project (PNTMP) which began in 1987. In 1990, he completed his post-doctorate research in northern Thai literature.

During 1987-1991, another 400-plus rolls of microfilm containing about 4,200 primary sources of the Lanna tradition were produced. Microfilming was conducted with documents stored at 53 selected temples throughout Thailand. All photographic work took place in the temples and no manuscripts were removed. After microfilming, they were carefully rewrapped and put back into their original storage. The whole process of preparing and microfilming the often extremely fragile documents was also used for providing training for local volunteers who engaged in these works.

MANY MANUSCRIPTS LEFT TO DIGITISE

There are still many manuscripts left to digitise. The project has microfilmed or digitised only 40,000-50,000 of about 2 million fascicles (phuk in Thai) of manuscripts in Thailand, so there is a lot of work left to do.