People rest in front of a destroyed house in Manta, Ecuador, on April 17, 2016 a day after a powerful 7.8-magnitude quake hit the country. / AFP PHOTO / LUIS ACOSTA

The total energy released by the earthquake in Ecuador that killed at least 246 people "was probably about 20 times greater" than the magnitude 7.0 earthquake that hit southern Japan on Friday, a scientist says. 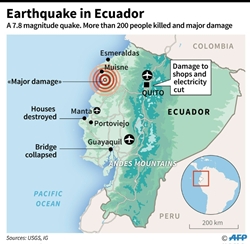 Portoviejo, Ecuador, AFP – Rescuers in Ecuador burrowed through rubble where towns once stood Sunday in an increasingly desperate attempt to find survivors of an earthquake that killed at least 246 people and allowed scores of inmates to escape prison.

Some 200 aftershocks of lesser intensity have followed the quake.

Although the oil-producing South American nation frequently suffers seismic shudders because of its position on the Pacific rim's Ring of Fire, the quake – though it lasted just one minute – was the worst in nearly 40 years in Ecuador.

Ecuador has been rocked by seven earthquakes of magnitude 7.0 or higher in the region of Saturday's quake since 1900, the US Geological Survey said. One in March 1987 killed about 1,000 people.

David Rothery, a professor of geosciences at Britain's Open University, said the 7.8 magnitude meant that "the total energy involved was probably about 20 times greater" than the magnitude 7.0 earthquake that killed at least 41 people in southern Japan on Saturday.

He said there was no causal link between the two quakes.

The epicenter of the quake was 170 kilometers northwest of the capital Quito, which suffered relatively little damage beyond cracks in walls and a power outage.

The quake wrecked buildings, toppled power lines and sent terrified residents running from their homes when it struck a coastal zone popular with tourists. 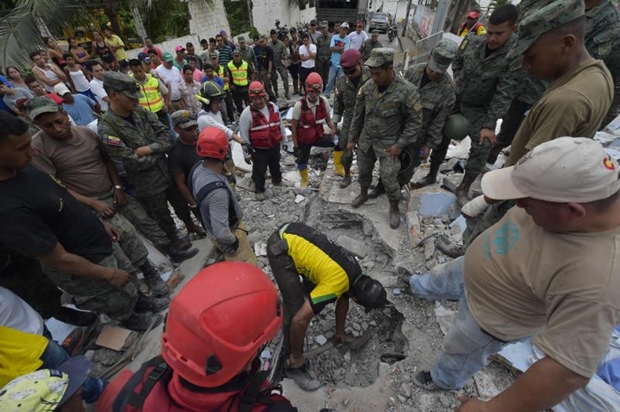 Rescuers work in one of Ecuador's worst-hit towns, Pedernales, a day after a 7.8-magnitude quake hit the country. / AFP PHOTO / RODRIGO BUENDIA

Some 100 inmates in a prison in the western town of Portoviejo escaped when the quake shook their facility, Justice Minister Ledy Zuniga tweeted.

About 30 of them had been recaptured, some had returned voluntarily and police were hunting for the others.

Officials have declared a state of emergency in the worst-hit provinces, and a national state of "exception," both of which suspend certain civil rights and liberties to allow security forces and officials to react faster.