A woman tends to her watermelons at her farm in Buri Ram province in March. (Bangkok Post file photo)

More than half of the vegetables and fruits awarded the government’s "Q mark" for quality were found to have harmful pesticide residue levels, according to a recent food safety study.

Cabbages and watermelons, often regarded as pesticide - contaminated, turn out to be safe to eat.

The results were announced by the Thai- Pesticide Alert Network (Thai-PAN), which tested 138 samples of popular fruits and vegetables in Greater Bangkok, Chiang Mai and Ubon Ratchathani during March 16-18. 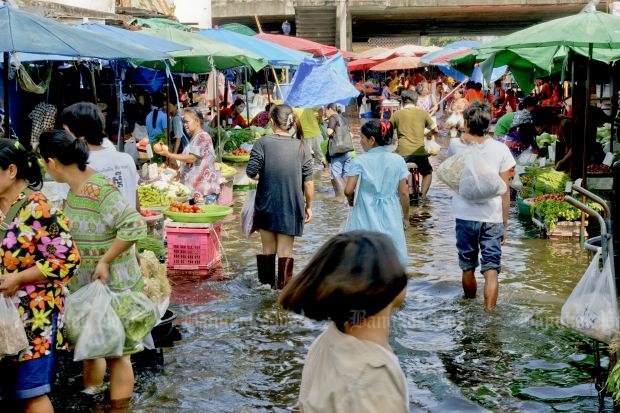 Some wet markets are wet in more ways than one.

The network sent the samples for testing at a lab in the United Kingdom which used a  multi-residue pesticide screen testing method to examine for 450 chemical residues.

The overall results showed that 46.6% of samples contained residues higher than the accepted safety standard level, according to Prokchol Ousup, a Thai-PAN coordinator.

Notably, 57.1% of fruits and vegetables granted the “Q mark” by the National Bureau of Agricultural Commodity and Food Standards, were to be found contaminated at unsafe levels.

25% of the products certified as being organic, which were supposed to be free of chemicals, were found to contain chemical residues exceeding the accepted standards.

MORE EXPENSIVE RETAILERS HAVE A PROBLEM TOO

The network said that fruits and vegetables collected from modern trade outlets (hypermarkets & high-quality stores in malls) where consumers pay higher prices did not have much higher safety standards than those in wet markets, with 46% of produce from modern trade shops containing residues exceeding the standards, compared with 48% from fresh markets.

Residues of 11 prohibited substances were also found in the samples.

However, 100% of the regular cabbage samples were free from harmful residues.

For the fruits, 100% of tested oranges and guava were contaminated with harmful residues exceeding the standards.

The Agricultural and Cooperatives Ministry needs to revamp its operation to ensure credibility in granting its "Q mark" of safety to farmers.

This is according to Kingkorn Narintarakul, deputy director of BioThai, a foundation that promotes sustainable agriculture and food security in various communities across the country.

Tests this year had been widened to cover more substances.

If the test results had been cut to only four main groups, as in 2012, the unsafe percentage of chemical residues would be found in only 18% of tested samples, compared with 48.6% in 2012.

So, there does seem to have been some improvement during the period 2012-2016.