Leicester to visit later this month

Leicester City's Thai owner and chairman Vichai Srivaddhanaprabha is cheered by crowds of waiting fans as he arrives for lunch at an Italian restaurant in the centre of Leicester on May 3, 2016, the day after Leicester City won the English Premier League title. Thousands celebrated and millions around the world watched in wonder as 5,000-1 underdogs Leicester City completed arguably the greatest fairytale in sporting history by becoming English Premier League champions. / AFP PHOTO / JUSTIN TALLIS

English Premier League champions Leicester City will visit Thailand, the country of their owners, later this month. 30 player are reported to be receiving Mercedes cars from owner Vichai.

Champs Foxes due in town this month

Leicester won England's top-flight title for the first time in their 132-year history with two games to spare after Spurs' 2-2 draw at Chelsea on Monday.

Leicester vice-chairman Aiyawatt Srivaddhanaprabha said yesterday that the club's visit was to show its gratitude to its Thai fans.

"We have scheduled to bring over the full Leicester City squad led by their top striker Jamie Vardy, star Riyad Mahrez and team manager Claudio Ranieri to Thailand for two days of vacation on May 18-19.

"This is to thank the Thai people for their support which played a role in the team winning the Premier League this season."

Leicester visited Thailand twice in 2014 after winning the second-tier Championship title and last year. They also played Everton in a friendly in Bangkok in 2014.

Leicester host Everton in their penultimate game and last home match of the season tomorrow when the Foxes will be presented with the Premier League trophy. 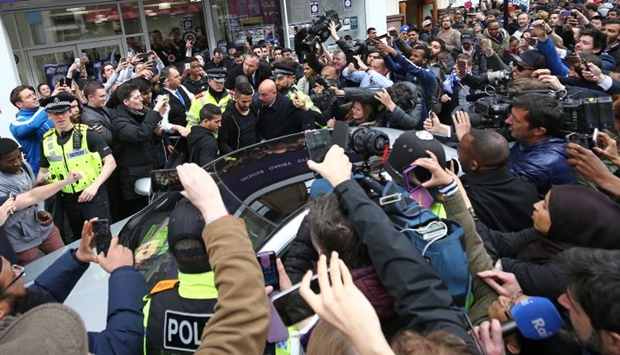 Leicester City's Algerian midfielder Riyad Mahrez (C) is helped to a car as he makes his way through crowds of fans after having lunch with team-mates at the Italian restaurant. / AFP PHOTO / JUSTIN TALLIS

All Leicester players will each receive a Mercedes from club chairman Vichai Srivaddhanaprabha, according to reports.

British tabloid Daily Mail claimed that each of the 30 players will get a Mercedes worth £32,670 (about 1.6 million baht), and Vichai will have to pay a total of about £1 million.

Meanwhile, Hollywood star Tom Hanks is indeed not one of the lucky bettors who took home a nice payday from 5,000-to-1 longshots Leicester City winning the Premier League title.

Hanks' publicist, Michelle Margolis, confirmed to ESPN that Hanks was joking when he told a reporter last week that he wasn't as upset that his favourite team, Aston Villa, will be relegated at the end of this season because he had placed a £100 bet (US$145) on Leicester City.

When the reporter asked Hanks, on the red carpet for his film A Hologram For The King, if he was telling the truth at the time, he simply replied, "Maybe I did, maybe I didn't."

No single event in sports betting history that had odds as low as Leicester City's 5,000-to-1 had ever come through.