Optimistic farmers in Nonthaburi’s Pak Kret district plough a field for their new rice crop after recent rains brought relief from the drought. The Meteorological Department recently declared the rainy season started on May 18. It is likely to last until mid-October. TAWATCHAI KEMGUMNERD

The drought is still with us, but forecasters are optimistic this year's rains will be above normal, in part because of the end of the unusually severe El Nino.

It's official the Thai Meteorological Department says. The rainy season has begun.

It began on May 18 when southwesterly winds began to dominate weather patterns throughout the country, bringing moisture from the Andaman Sea,  Meteorological Department chief Wanchai Sak-udomchai said on Monday.

This doesn't mean, however, that the severe drought affecting much of the country will soon be broken. Mr Wanchai said that the rain in the beginning of the season will be intermittent. Rain intensity will increase in the second half of the season, he said. 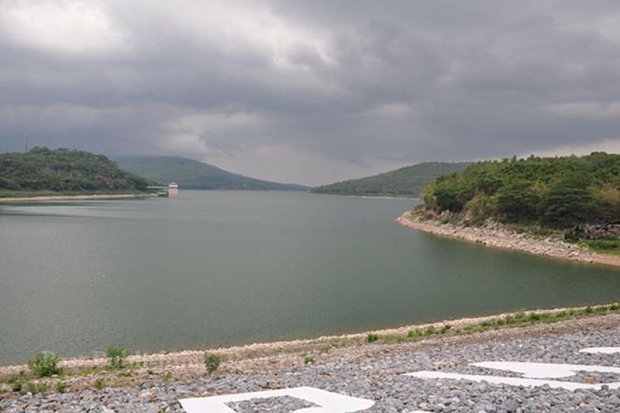 Water levels at Lam Takhong and four other reservoirs in Nakhon Ratchasima remain at only around 20% of their capacity despite heavy rain from a summer thunderstorm. SOMCHAI POOMLARD

Meanwhile, the situation is still dire in and around Thailand's biggest dam. The Bangkok Post's Apinya Wipatayotin reported yesterday that the Bhumibol dam has not received any water since the rainy season started. Reports say it has only two percent of usable water remaining.

Elsewhere, reports are more favourable, however.

Royal Irrigation Department chief Suthep Noipairoj said although the Bhumibol dam has not yet received water, three other major dams – the Sirikit in Uttaradit, the Kwae Noi in Phitsanulok, and the Pasak Jolasid in Lop Buri – have been blessed with rainwater flowing downstream from the North.

Forecasters are optimistic that this year's rainfall will be above normal. One key reason behind their optimism is the end of the severe El Nino phenomenon in place throughout the past year. The abnormally warm surface waters flowing from the western Pacific into tropical areas have been gradually cooling since November and are approaching normal temperatures.

A severe El Nino changes weather patterns around the world and here in Thailand unusually dry conditions can result as the heavy rains shift eastward, largely missing the country.  When ocean temperatures return to normal, wetter conditions should prevail.

Climate scientists at the US-based national Oceanic and Atmospheric Administration now say there is a 75 percent chance that the surface temperatures will actually be below normal late this year if not sooner. This condition is known as La Nina and, for our part of the world, that would certainly mean more rain than El Nino conditions.