From the East Coast to the West Coast, Kittipak Tantichot continues his visits to US colleges and universities. Here, he ends up very impressed with UC Berkeley.

A week has gone by visiting colleges on the East Coast. My camp at Stanford is about to start, but we’ve decided to arrive a few days earlier to look at some colleges in the West Coast.

When I left the Los Angeles airport in the afternoon, it was almost like a different country. It was very dry and very hot, it was almost as hot as Thailand. This is a contrast from what I’m used to in living Massachusetts for school, where there is a lot of vegetation and cool weather almost all year long.
My family and I were going to visit a couple universities in California, but one that I was most looking forward to seeing was UC Berkeley. Unlike the other ones, we booked an official tour of the college, so we would know in depth the details of our surroundings and the story behind it. 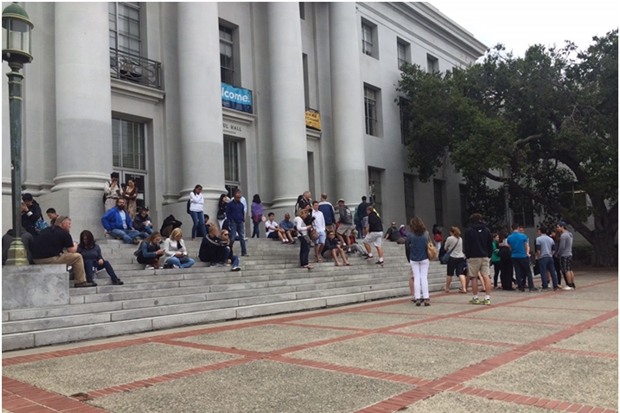 Shortly after arrival we weren’t quite sure where to go, so we hurried into the admissions office and they told us to wait outside of Sproul Hall. The columns on this building to me, resembled the pantheon in Rome. We arrived a little early and it just turned ten, but there already  hundreds of people waiting for the 10:30 tour (I’m not kidding!). There were people from so many countries in the world. There was even a Chinese tour, with a group of kids that seemed to be travelling across the U.S.A just for the purpose of visiting colleges.

Once it turned 10:30 a man walked outside of the building, and brought along six tour guides with him to accommodate the hundreds of people going on the tour. They each introduced themselves one by one. One female tour guide stood out from the rest. I hate to say that I don’t remember her name.  She said her name loudly, and said that she hoped that more people would choose to come with her in a humorous manner. Everyone laughed, and because of that we decided to go with her. 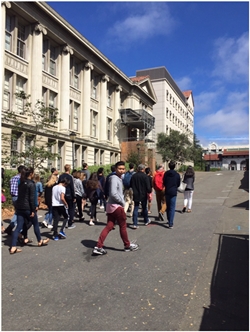 On tour at UC Berkeley.

All the tour guides here either currently go to UC Berkeley or have attended it the past. So it was a great opportunity to ask questions from someone who actually had the experience. My tour guide had just completed her first year of college, so she was still pretty young, and full of enthusiasm. I asked several questions, about life here, and about some clubs. There were also many extremely enthusiastic parents, who rapid-fired questions towards the tour guide involving the admissions process and the chances of their child getting in. It was fun, but also very stressful to be around an anxious crowd.

On the other hand, I saw everything from the huge dormitories to grand libraries and learned about them great detail. My tour guide also told us some interesting myths about UC Berkeley.

Myth one: There is a spot that you can’t step on in UC Berkeley, if you do, then you will fail your exams. There is a solution to this, if you accidently do in fact step on it. You have to start from the very spot you stepped on, and as the clock tower strikes midnight, you have to run and touch it and return to the spot before the bells stop ringing (12 seconds). This is nearly impossible because the clock tower is very distant, and if you can make it, I suggest you try out for the Olympics.

Myth two: There is a carved head of Athena, the god of wisdom on top of the Library’s entrance. Once you walk in she grants you knowledge. However, if you walk out with your back away from her, she zaps it away, because of the disrespect you have shown her. This is why you might see some people tilting their head towards her as they exit, or even walking backwards.

All of these colleges are very different from the ones in Thailand, because of their  diversity, community, architecture, and teachers, so there are countless things to grasp. And I managed this much in the short one and a half hour tour.