K-pop "groupie" has his ticket

The hugely popular Girls Generation performs here on Sunday and "Sone" fan Sithikorn has a ticket -- not an easy accomplishment since they were sold out in 20 minutes.

I have put this in "learning together" because Sithikorn is not a native speaker of English. He has great ideas, but he does need help in getting them expressed correctly in English. Thus, his article in the Life section was a great learning experience for him and I'm sure you'll enjoy it.

As you may have guessed, I am one of the hardcore fans who has struggled for a Girls' Generation ticket. The band is known as SNSD (acronym of the Korean name So Nyuh Shi Dae). SNSD fans are called Sone (SO-WON) and, yes, I am a Sone. 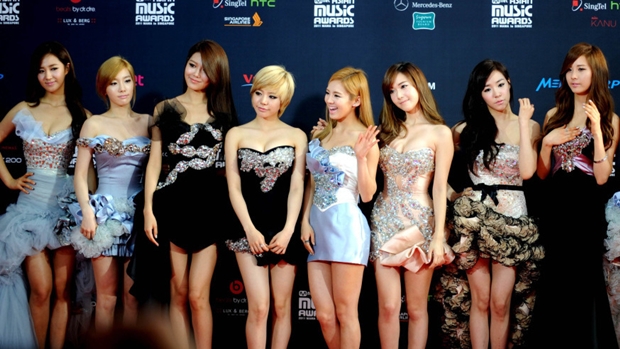 The night before the tickets went on sale, I didn't get much sleep, and dragged myself out of bed by 7am to get in line three hours before the opening of the ticket booth. Looking back, I am proud that I did all that. There was no other way to get a ticket – my first time queuing for a concert ticket.

Being a groupie matters most. If you really are a groupie you are there at 5am waiting in the line.

Even if you are not, you may still have to be there for your daughter or girlfriend. In this case, there is no other choice but to queue up.

One of my colleagues was in this group. He was going to queue up for his daughter. With my help, he has secured a ticket for his girl.

At that time, I believe almost everyone could sing it (at least the chorus) and dance – or cover dance on stage – to it.

Girls' Generation – SNSD – comprises nine girls and they are a global phenomenon with their looks and dancing prowess. Just how popular are they? They just did a sold-out concert in Singapore where tickets were gone in four hours, prompting them to add a second show. Paris, Los Angeles, New York and the David Letterman Show – they have been everywhere.

After the Nobody breakthrough in 2009, K-pop groups have flooded the pop scene, but for me, SNSD is still among my top three.

Other bands or groups have their own unique styles with dance routines (seen in local teen homes or at parties). Here are some of the song titles: Gee, Genie, The Boys, Sorry Sorry, Heartbeat, Bo Peep Bo Peep and Ma Boy.

Back to the concert. Okay, you've got your ticket, but you're still not ready.

Wherever the girls travel, die-hard Sone fans have something special for them. Here in Thailand, this was organised by a fan club webmaster. A meeting was held to decide on what to do for the concert and how to make the atmosphere even more electric.

A friend of mine, a true Sone, was at the meeting and told me to YouTube the idea for the concert. (http://www. youtube.com/watch?v=tu7cDAbNYvc)

Pink Ocean (everyone waving a pink light), Fanchants (repeating lyrics), Birthday signs (sending a special message by light stick) and Paper Planes are just some of the things that fans have prepared. And they do this everywhere the girls go – international fan culture.

As I bought a ticket in a special seat, I have secured a position that requires me to hold a yellow light stick with a special message.

Now, can you guess how much I paid to watch my favourite K-pop girl group?

incredible – difficult to believe ไม่น่าเชื่อ
feat – accomplishment; an action or a piece of work that needs skill, strength or courage ความสำเร็จ,ความสามารถ,ฝีมือ
wow – to impress somebody very much, especially with a performance ทำให้ตื่นเต้นยินดีอย่างมาก (คำไม่เป็นทางการ), ทำให้ประทับใจอย่างมาก
tidbit – a small but interesting piece of news เรื่องซุบซิบ
genre – a particular type or style of literature, art, film or music that you can recognize because of its special features ชนิด, ประเภท
charts – a list, produced each week, of the songs or albums that have sold the most copies or been downloaded the most   การขึ้นอันดับ, การทำสถิติ
separate – forming a unit by itself; not joined to something else  ซึ่งแยกออกจากกัน
set limits – to stop something from increasing beyond a particular amount or level จำกัด
exposure – the fact of being shown, discussed or mentioned on television, in newspapers, etc. การเผย, การเปิดเผย
hardcore – loyal and willing to give your time and energy to something that you believe in อุทิศตัวเพื่อ
struggle – to try hard to do something that you find very difficult พยายาม
acronym – a word formed from the first letters of the words that make up the name of something, for example ‘AIDS’ is an acronym for ‘acquired immune deficiency syndrome’ ตัวย่อ, คำย่อจากพยัญชนะตัวแรกหลายคำ
drag – to pull something or someone along with difficulty ลาก
queue – to stand in a line waiting for something เข้าคิว, เข้าแถว
colleague – someone who works in the same organisation or department as you do เพื่อนร่วมงาน
curiosity – a strong desire to know about something ความอยากรู้
sum – an amount of something, especially money จำนวนเงิน
it depends – uncertain because several things have to be considered ขึ้นอยู่กับ
global – known throughout the world ระดับโลก
local – in or related to the area that you live, or to the particular area that you are talking about  ท้องถิ่น
groupie – a person who follows pop or rock musicians or other famous people around and tries to meet them, or a person who is an extremely loyal fan  ผู้คลั่งไคล้ดารา (คำสแลง), แฟนเพลง, กลุ่มผู้สนับสนุน, ผู้ติดตาม
matter – to be important or have an important effect on somebody/something เป็นเรื่องสำคัญ, มีความหมาย
secure – to get or achieve something ได้มาซึ่ง
chorus – part of a song that is sung after each verse  บทเพลงท่อนที่ร้องซ้ำ
comprise – to consist or be made up of two or more things ประกอบด้วย
phenomenon – someone or something extremely successful, often because of special qualities or abilities
prowess – great skill at doing something ความสามารถยอดเยี่ยม
popular – a situation in which someone or something is liked by many people เป็นที่นิยม, เป็นที่ชื่นชอบ
prompt – to cause something to happen or be done ก่อให้เกิด
breakthrough – an achievement that comes after a lot of hard work การพัฒนาหรือการค้นพบที่ยิ่งใหญ่, การบุกเข้าไปในแนวเขตของคู่ต่อสู้
unique – being the only one of its kind  ซึ่งเป็นหนึ่งเดียว
routine – a series of movements, jokes, etc. that are part of a performance
die-hard – very loyal; hardcore จงรักภักดี
atmosphere – the mood or feeling that exists in a place บรรยากาศ
electric – full of excitement; making people excited ตื่นเต้น
lyrics – the words of a song เนื้อเพลง