Chompoo has her say

Chompoo Araya A. Hargate gives an English language interview about her new musical Reya, her life, taxes and her career. 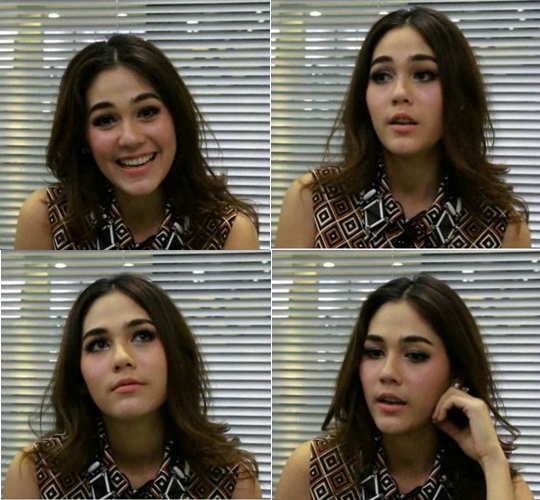 A very expressive Chompoo Araya A. Hargate during her interview at the Bangkok Post. Photos from video Somchai Poomlard.

This lesson, first published on September 7, 2012, is certainly one of our most popular lessons ever. It is still fun to hear the superstar speak English with Bangkok Post columnist Arglit Boonyai.

Chompoo has her say

Well, Reya the Musical, I believe that most of the Thais have seen (it) on television, in the lakhorn version. It’s a novel by Khun Thaithao Sucharitkul and now it’s becoming a musical. A lot of people are criticising Reya – if she’s a good or a bad person, or whatsoever, but I think people just enjoy it.

Well, for now, I work like eight days a week. No holiday, no day off, but it depends. Maybe it’s because now I’m shooting one lakhorn on Monday to Wednesday and the rest is for the musical.

My free time, well, if I have a day off I’ll just do my things, go to the bank, see my parents, see my skin doctor, manicure, pedicure and that’s it.

Of course I do. I pay all my taxes. How would I see it? Design how you would like to pay your taxes. Everybody has to pay. I believe that death and taxes (are) the two things you can’t run away (from), so I’ve had the issue with the tax problem before – three, four years ago. And I’ve gone through it and I’ve learned that I don’t want to go through it again.

Arglit Boonyai: Do you know about the gangnam style. Can I get you to dance. (Chompoo demonstrates)

I love myself, and so I love my career and I think it’s, I know that it’s a very good opportunity for me and it’s given me a lot of good things, money, better quality of life and everything, so I wouldn’t want to do anything to destroy it, but it doesn’t mean I’m not being myself or anything, but I believe in Thai you call it rak dee. (do good things)

expressive – showing or able to show your thoughts and feelings  เกี่ยวกับการแสดงออก
novel – a story long enough to fill a complete book, in which the characters and events are usually imaginary นิยาย
criticise – to say that you disapprove of somebody/something; to say what you do not like or think is wrong about somebody/something วิจารณ์, ติเตียน,จับผิด
manicure – the care and treatment of a person's hands and nails การตกแต่งเล็บและมือ (การเสริมสวย)
pedicure – care and treatment of the feet and toenails การล้างขัดหรือทาเล็บ,  การดูแลและรักษาเท้า
taxes – money that you have to pay to the government so that it can pay for public services ภาษี
issue – a problem that needs to be considered ประเด็น
demonstrate – to show something or explain how it works สาธิต