More+
Taking too many selfies can make you crazy?
Learning
Advanced news

Taking too many selfies can make you crazy?

Not enough likes for their selfie, not happy with themselves or their body, posting again & again, checking on who looks & comments, still no good response... 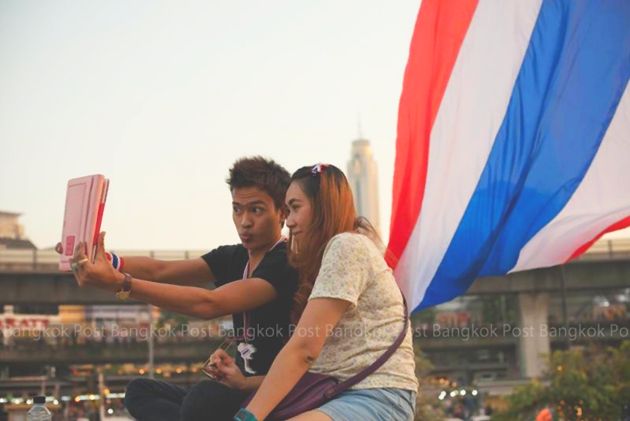 Thai anti-government protesters take a selfie photograph with an Ipad at Victory monument during ongoing rallies in Bangkok on January 15, 2014. (AFP PHOTO)

The Department of Mental Health has warned young people who are obsessed with the popular "selfie" trend that they could lose self-confidence and that the addiction could have a negative impact on their life and work.

The selfie narcissistic culture is popular among local internet users, especially in the teenage and student groups, who post photographs of themselves online in a bid to seek approval and attention, department deputy director-general Panpimol Wipulakorn said in a statement released on Sunday.

She claimed such behavior could lead to mental health problems in future, especially related to self-confidence, and this could unexpectedly cause a negative effect on a person's everyday life, future career and even the country’s development.

"A selfie creates an impact, more or less, on one’s everyday life, depending on each individual. Posting photos [on social network sites] to seek approval and ‘likes’ from peers as a reward is normal human nature. Whatever people do and then get rewarded for it, they will do again,” Dr Panpimol said.

“But the reward has varying degrees of emotional effects on each individual. Some people are happy after sharing a selfie and getting few likes, while others expect as many likes as possible and become addicted to being liked.

“Conversely, if they feel they don’t get enough likes for their selfie as expected, they decide to post another, but still do not receive a good response. This could affect their thoughts. They can lose self-confidence and have a negative attitude toward themselves, such as feeling dissatisfied with themselves or their body.

“Paying too much attention to one’s shared selfies by continuing to check on who sees or comments on them in the hope of getting the most likes as possible is a sign that selfies are causing problems for them, including a possible lack of self-confidence,” Dr Panpimol said.

Thailand has approximately 19 million users of Facebook and 800,000 users of Instagram, according to a survey by the Electronic Transactions Development Agency (ETDA), a public organisation.

The mental health expert quoted an American psychiatrist as saying that selfies could undermine or erode one’s self-confidence and self-esteem. She added that public health officials in the UK had announced that addiction to social media such as Facebook and Twitter was an illness and more than 100 patients sought treatment every year.

She said self-confidence is crucial as it enables people to have self-satisfaction, happiness, accept truth and not hunt for love or attention from others.

Those losing self-confidence can feel nervous, hesitant and not happy with their life. Living under such conditions for a long time could lead to mental and emotional disturbances such as paranoia, jealousy, nitpicking and depression.

“If Thai youth become lacking in confidence, this means they are unlikely to try new things in their lives and they will simply follow or imitate others - and that will make it hard for them to develop themselves.

“This could affect the development of the country in the future as the number of new generation leaders will fall short. It will hinder the country’s creativity and innovation. Those in work will advance in their careers more slowly than other people [with self-confidence],” Dr Panpimol said.

To stop from becoming a selfie addict, a person must pay attention to people and things around them in everyday life and spend time doing activities with family members and friends such as exercising, watching movies and travelling.

Dr Panpimol urged teen internet users to accept other people's differences and opinions as being equally valid as their own, as well as exercise restraint on taking selfies too frequently.

“Taking selfies cannot be done all the time and when being in an inappropriate place and time you must force yourself to go against your will to do it.

“If you can pass that point. Next time you will be able to control your selfie-taking behaviour,” Dr Panpimol said.