More+
Jakarta student: #KamiTidakTakut: We are not afraid
Learning
Community

Jakarta student: #KamiTidakTakut: We are not afraid

published : 18 Jan 2016 at 08:37
writer: Audia Azani
Demonstrators hold placards during a vigil outside the damaged Starbucks coffee shop in central Jakarta on January 15, 2016, a day after a series of explosions hit the Indonesian capital. AFP PHOTO / MANAN VATSYAYANA

Jakarta student Audia Azani reports that terrorists involved in last week’s attacks failed to terrorise city residents, many of whom watched the fight calmly as spectators. Meanwhile, the social media was focused on a particularly handsome police officer.

People are finally beginning to understand that they can take part in our “Learning Together” section. Here is a note that came in yesterday from the writer of today’s story:

“My name is Audia Azani from Indonesia. I'm originally from South Borneo, but right now I live in Jakarta where I'm a student of Meteorology. I'm interested in learning English and I want to improve my English by visiting the Bangkok Post Learning website frequently. But I realise that I can't improve very much if I'm just a passive learner, so I decided to send in this short report (on the situation in Jakarta after last week’s attack) and I hope this will help me to improve.”

Message from Jakarta student: #KamiTidakTakut: We are not afraid 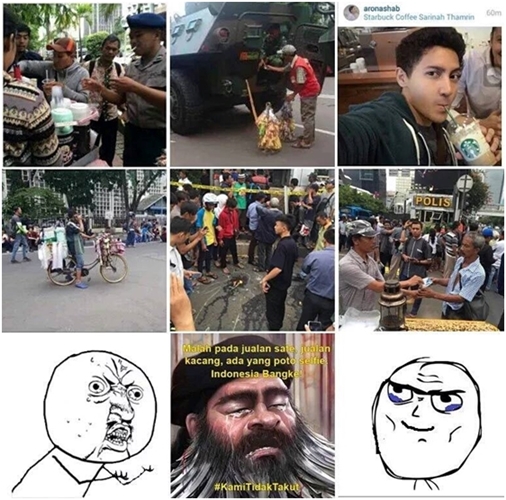 A meme by a Facebook Fanpage Apptoko.com which represents how Indonesians have been dealing with terrorism. Translation: "People sell satay, nuts, and take a selfie instead. Damn Indonesia! #WeAreNotAfraid".

If you have a Twitter account, you might see the hashtag #KamiTidakTakut which became a “Worldwide Trending Topic” on Thursday, January 14, 2016. That hashtag means “We are not afraid” in Bahasa Indonesia. Indonesians used that hashtag as a symbol of their bravery in the fight against terrorism. The hashtag appeared as a result of the terrorist attack in Jakarta where bombs and gunshots made the scene look just like that of the November attacks in Paris. Indonesians insisted on saying they were “not afraid” through the social media.

But, are they really not afraid?

Actually, the main purpose of terror is making people feel afraid and insecure. But, it doesn’t work for Jakarta people. When the incident occurred, many people came to the attack site to watch the police and the terrorists fight each other. They watched it calmly just like watching a movie shoot.

A few hours after the incident, someone shared a picture via Path of a man who sold satay. He said that the satay booth was only 100 meters from the location of the terrorist attack. And it was not only the satay man; other sellers also came to the site and offered many things like drinks, nuts and fruit as snacks for people who came to the attack scene. Even an army officer bought mangoes from a seller.

Besides #KamiTidakTakut, the hashtag #KamiNaksir (We have a crush on someone) also went viral. It was because there was a police officer at the scene who looked handsome and fashionable. Instead of talking about terrorism, people in social media (mostly girls) were more interested in talking about that handsome police officer.

So, we can  learn from Jakarta (and Indonesian people) about how the social media can have a big psychological impact on others. Jakarta people recovered really fast. Soon after the terror, people were able continue their activities normally. But still, people should always be on guard because an attack might come anytime.