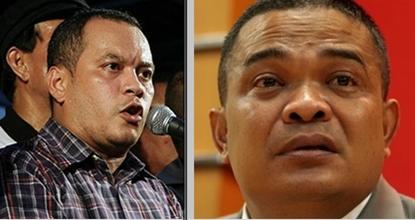 The Election Commission has now met its goal of certifying at least 95 percent of the MPs, today endorsing 94 more MPs. Nattawut Saikua was one them. Jatuporn Promphan was not.

Red-shirt leaders Nattawut Saikua (left) and Jatuporn Promphan will find out today if they are among the MPs endorsed by the Election Commission.

The Election Commission has just announced that it has endorsed 94 more MPs, bringing the total to 496 out of the 500-seat House of Representatives, over the 95 percent level required for parliament to convene.

Red-shirt leader Nattawut Saikua was one of the lucky 94, but his co-leader Jatuporn was not, meaning he remains in prison.

Today's big story in Thailand is likely to be the Election Commission's announcement that it has certified at least 475 MPs, or 95 per cent of the 500-seat House of Representatives.

If that happens as promised, the new House of Representatives can convene and before long Yingluck Shinawatra will almost certainly become Thailand's first female prime minister.

Probably the biggest item of interest is whether or not the EC will endorse United Front for Democracy against Dictatorship leaders Jatuporn Prompan and Natthawut Saikua, Pheu Thai party-list MPs-elect.

Both may have problems with their qualifications. Mr Jatuporn failed to vote in the general election, not deliberately, of course, but because he was in prison. As for Mr Nattawut, there were complaints that he had slandered opponents.

In other news from the EC, commissioner Sodsri Sattayatham said the EC had agreed to call a vote recount in Yala's Constituency 2 as requested by a Pheu Thai candidate.  EC chairman Apichart Sukhagganond would go to the constituency to supervise the recount himself.

Asked about a report of the disappearance of ballot papers in Ratchaburi province, she said election officials reported 165 of the ballots which had been used and counted had been taken out of a ballot box which was kept at a local police station.  The matter would be investigated, Mrs Sodsri said.

endorse – to officially approve รับรอง
Election Commission – the independent government agency that oversees elections คณะกรรมการเลือกตั้ง
certify – to give somebody an official document proving that they are qualified to work in a particular profession  รับรอง, ลงนามเป็นพยาน
convene – to call a meeting เรียกประชุม
female – being a woman or a girl สตรี, ผู้หญิง, เพศหญิ
item – a single article or object  รายการ, รายการสิ่งของ
United Front for Democracy Against Dictatorship (UDD) – the group originally formed to demonstrate against the 2006 coup and which supported the Somchai Wongsawat government against the PAD and which led the fight against the Abhisit government. They are known for wearing red shirts แนวร่วมประชาธิปไตยต่อต้านเผด็จการแห่งชาต
party-list – a system that gives each party in an election a number of seats in relation to the number of votes its candidates receive ระบบสัดส่วน, ระบบปาร์ตี้ลิสต์
-elect – of someone who has been elected to a position but has not yet taken power ว่าที่
qualifications – the abilities, qualities, degrees, etc. that you need for a particular job or activity คุณสมบัติ, คุณวุฒิ
deliberately – done intentionally; done on purpose จงใจ ตั้งใจ
slander – to make a false spoken statement about somebody that is intended to damage the good opinion that people have of them  พูดให้ร้าย, กล่าวร้าย, ใส่ร้าย
opponent – someone who is competing against you ฝ่ายตรงข้าม
commissioner – a member of a commission, a group of people who have been formally chosen to discover information about a problem or examine the reasons why the problem exists กรรมาธิการ  ผู้ได้รับมอบหมายอำนาจหน้าที่
recount – to count something again, especially votes นับใหม่
constituency – a district that elects its own representative to parliament เขตเลือกตั้ง
candidate – a person who is trying to be elected ผู้สมัครรับเลือกตั้ง
supervise – to be in charge of an activity and to check that everything is being done correctly  ดูแล ควบคุม
disappearance – moving something or someone somewhere where they can no longer be seen การหายไป, การสาบสูญ, การสูญหาย
ballot – the piece of paper on which someone marks who they are voting for บัตรเลือกตั้ง
investigate – to try to find out the facts about something in order to learn the truth about it ตรวจสอบหาความจริง