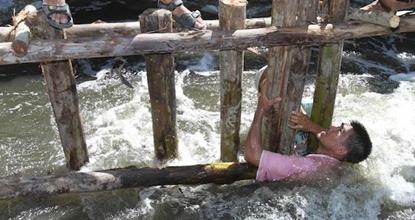 News photographers are used to danger, but Bangkok Post photographer Pattanapong Hirunard found out yesterday that everyday life can be even more dangerous. 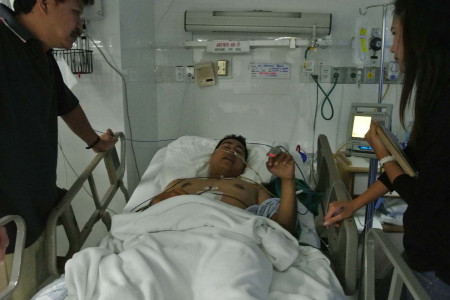 News photographers are used to danger while covering violent protests, crimes, fires and natural disasters. Bangkok Post photographer Pattanapong Hirunard found out yesterday, however, that everyday life can be even more dangerous.

He ended up in hospital with a bullet wound to his stomach, apparently over a simple car parking misunderstanding.

The incident occurred when he drove his girlfriend Kranthip Jantharajorn, to his home in the Patthavikorn Housing Estate II on Ram Intra Road in Kannayao district to fetch a personal belonging.

Ms Kranthip, 26, said Mr Pattanapong went into the house while she waited in the car.

Ms Kranthip said she saw a man, later identified as Maj Gen Benja Wongsue, 74, a retired soldier who lives nearby, standing with his hands behind his back.

Ms Kranthip alleged Maj Gen Benja shot Mr Pattanapong, hitting him in the stomach. The bullet missed vital organs and exited through his back.

Neighbours took Mr Pattanapong to hospital where he is in stable condition. 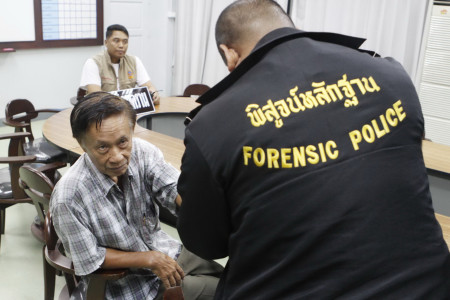 Maj Gen Benja is questioned by police after the shooting. Post Today photo

Maj Gen Benja was detained by Khok Kram police and has been charged with attempted murder, carrying firearms in public without permission, and shooting a firearm in public without reasonable grounds. He was released on 300,000 baht bail.

The retired officer reportedly accused the photographer of parking his car in his driveway.

vital – extremely important; necessary for the success or continued existence of something จำเป็นสำหรับชีวิต
organ – a part of the body that has a particular purpose, such as the heart or the brain  อวัยวะ
violent – involving the use of physical force, with the intention of causing damage to property or injury or death to people รุนแรง
protest – a meeting or rally, sometimes forceful or violent, of people who strongly disagree with something ชุมนุมประท้วง
natural disaster –an unexpected natural event, such as a very bad storm or flood that kills a lot of people or causes a lot of damage ความหายนะธรรมชาติทาง, ภัยพิบัติธรรมชาติทาง
bullet – a small, metal object that is shot from a gun  กระสุนปืน
wound – an injury in which your skin or flesh is damaged บาดแผล
apparently – based only on what you have heard or think, not on what you are certain is true; seemingly ตามที่ได้รู้มา
incident – something that happens, usually something bad เหตุการณ์
occur – to happen เกิดขึ้น
fetch – to go to where somebody/something is and bring them/it back ไปเอามา
personal – your own; not belonging to or connected with anyone else  เป็นส่วนตัว
belonging – something you own ข้าวของเครื่องใช้
identified – named  ระบุชื่อ
retired – no longer working because you have reached the age where you are officially too old to work เกษียณอายุ
allegedly – claimed to have done something wrong, but not yet proven ที่กล่าวหา
exit – to leave ออกจาก
stable – not changing frequently and not likely to suddenly become worse  คงที่, มั่นคง
condition – the physical state of a person or animal, especially how healthy they are อาการ, สุขภาพ
detained – kept in a place and not allowed to leave กักตัว ควบคุมตัวหรือฝากขัง
charge – to accuse someone officially of committing a crime ตั้งข้อกล่าวหา
murder – the crime of intentionally killing a person ฆาตกรรม
firearms – guns อาวุธปืน
permission – allowing someone to do something การอนุญาต,การอนุมัติ,การยินยอม
reasonable – fair, practical and sensible  มีเหตุผล
grounds – reasons for saying or doing something เหตุผล
release – to allow someone to go free ปล่อยตัว
bail – money that is given to a court when someone is allowed to stay out of prison until their trial. If they do not return for the trial, the court keeps the money  เงินประกัน; การประกันตัว
admit – to agree that something is true, especially when you are unhappy, sorry or surprised about it  ยอมรับ
accuse – to say that someone has done something wrong or committed a crime กล่าวหา
driveway – a wide hard path or a private road that leads from the street to a house ถนน (โดยเฉพาะส่วนตัว) ที่เข้าหาถนนใหญ่, ทางรถ