Little is known about those allegedly involved in yesterday’s bombing attacks, but it appears that no one who met them suspected they might be terrorists. 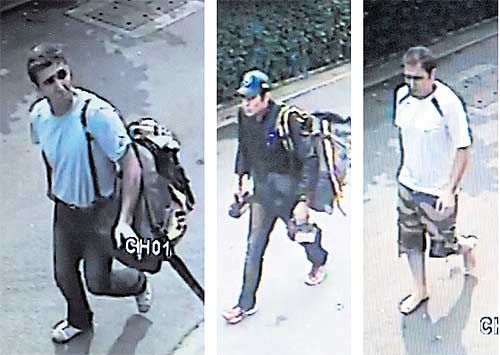 Pictures of the three suspects caught on a surveillance camera at Soi Pridi Banomyong 31. The man in the middle is Saeid Moradi and the one on the right is Mohummad Hazaei, who was later caught at Suvarnabhumi Airport.

Little is known about those allegedly involved in yesterday’s bombing attacks, but it appears that no one who met them suspected they might be terrorists.

Neighbours of the men in Bangkok spoke of the quiet but apparently busy nature of the suspected bombers in their midst.

Da Klongdan, 34, who lives opposite the two-storey house where the first explosion occurred around 2.20pm, said four foreigners – three men and one woman –  frequently went in and out of the building.

They routinely left the house, on Soi Pridi Banomyong 31, off Sukhumvit Soi 71 in the Ekamai area, at 10am or 1pm, and would be gone for about 30 minutes each time.

A hotel employee in Pattaya remembered Mr Saeid Moradi, 28, who was gravely injured during yesterday’s incident, as being “polite, good-looking and neatly dressed.”

“I can't believe that he would be a bomber," the employee said.

The Iranian bomb suspect checked in to Top Thai hotel in Pattaya on Feb 8 late at night with a backpack. Shortly afterwards, he called a friend who arrived at the hotel with a large piece of luggage.

Since both men were well presented and polite, hotel employees did not pay them much attention.

The employee said Mr Moradi and his friend mostly stayed in their room. They didn't come down for breakfast or lunch and only in the evening or at night would they venture out. On Feb 11, Mr Moradi booked his room for one more night. He and his companion checked out on Monday at 11.58am and Mr Moradi left a 500 baht tip.

suspect – a person who is thought to have committed a crime ผู้ต้องสงสัย
surveillance camera – a camera kept in a place to record what happens there, especially criminal activity กล้องวงจรปิดเพื่อรักษาการความปลอดภัย
allegedly – claimed to have done something wrong, but not yet proven ที่กล่าวหา
involved – taking part or having a role in something เกี่ยวข้อง
appear – to seem ดูเหมือนจะ, ดูเหมือนว่า
suspected – thought to have done something wrong เป็นที่สงสัย
terrorist – of someone who uses violence in order to  achieve political aims ผู้ก่อการร้าย
neighbour – someone who lives near you,  เพื่อนบ้าน
in the midst – in the middle of; very near ตรงกลาง
apparent – seeming to be something although it may not be real ดูเหมือนว่า, ตามที่เห็นภายนอก
nature – the usual way that a person behaves that is part of their character นิสัย
opposite – across from or facing someone or something ที่อยู่ตรงกันข้าม
frequently – happening often บ่อยๆ
routinely – regularly, done often จำเจ, บ่อยๆ, ซ้ำซาก
employee – someone who is paid regularly to work for a person or an organisation ลูกจ้าง
gravely – very serious; very dangerous อย่างวิกฤติ, อย่างร้ายแรง
injured – hurt in an accident or attack ซึ่งได้รับบาดเจ็บ
backpack – a large bag, often supported on a light metal frame, carried on the back and used especially by people who go climbing or walking เป้สะพายหลัง, กระเป๋าสะพายหลัง
luggage – baggage; all the cases and bags that you take with you when you travel กระเป๋าเดินทาง
pay attention – to watch, listen to, or consider something or someone very carefully เอาใจใส่, สนใจ
venture out – to go somewhere ออกไปข้างนอก
companion – a person who travels who you or spends a lot of time with you  เพื่อน, เพื่อนเดินทาง