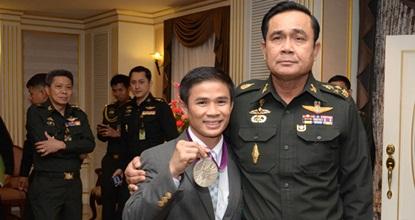 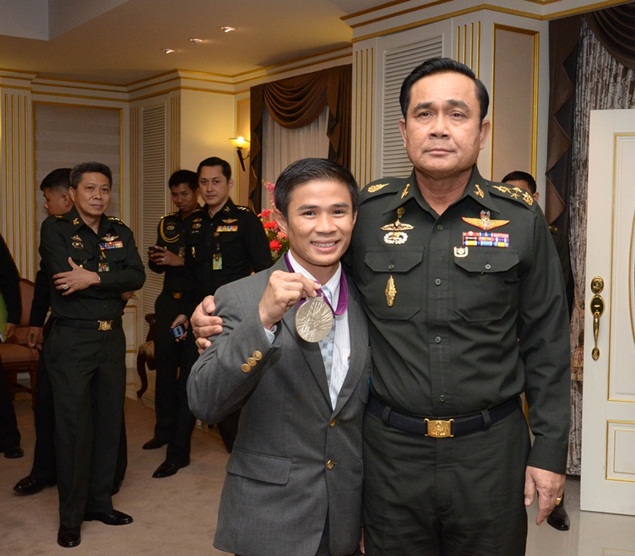 Kaew gets promotion; retires from boxing

Sgt Kaew, of course, is Thailand's newest boxing hero, winning a silver medal in the London 2012 Olympic Games that most Thais strongly believe should have been gold.

‘‘I have to congratulate Sgt Kaew for bringing fame to Thailand,’’ Gen Prayuth said after meeting the 32-year-old light flyweight boxer from Kamphaeng Phet at the Royal Thai Army headquarters yesterday morning.

Gen Prayuth also announced that he had given the boxer 60,000 baht for winning his silver medal.

The army chief also promised strong support for the development of amateur boxing in Thailand.

‘‘The army will continue to sponsor boxing and will produce more athletes to bring fame to Thailand in the next four years.

‘‘Regardless of what medals the athletes win, they represent Thailand and I will support them,’’ he said.

Lieutenant-to-be Kaew wants to be a part of that effort, not as a boxer, but as a trainer.

The 32-year-old will not have another chance at winning Olympic gold because the age limit for Olympic boxers is 34.

Initially, he said he would consider whether to continue fighting in other tournaments such as the SEA Games. But he said yesterday he was hanging up his gloves.

‘‘I want to help train younger boxers,’’ he said.

Adapted from a story in today's Bangkok Post by Wassana Nanuam.

pose – to stay in a particular position in order to be photographed วางท่าถ่ายรูป
congratulate – to praise someone about their success, good luck or happiness on a special occasion แสดงความยินดี
promote – to move someone to a job at a higher level เลื่อนตำแหน่ง
lieutenant – an officer of middle rank in the army, navy, or air force ร้อยโท
sub-lieutenant – an officer just below that of lieutenant ร้อยตรี
retire – to stop playing a sport as a professional or serious player because you are too old, have an injury or no longer have the desire อำลาวงการ
fame – the state of being famous or very well known ชื่อเสียง
headquarters – the place where an organisation or company has its main offices กองบัญชาการ
amateur – of sports or activities in which people take part for enjoyment, not as a job สมัครเล่น
sponsor – to support a person, organization or activity by giving money, encouragement or other help อุปถัมภ์, สนับสนุน
athlete – someone who is good at sports and takes part in sports competitions นักกีฬา
regardless of – without being affected or influenced by anything else that happens or exists โดยไม่คำนึงถึง
represent – to act, speak or be present officially for another person or people เป็นตัวแทน
effort – an attempt to do something ความพยายาม
limit – the greatest or smallest amount of something that is allowed ขีดจำกัด
initially – at first ในเบื้องต้น
consider – to give careful thought to something before making a decision พิจารณา
tournament – a competition for teams or single players in which a series of games is played, and the winners of each game play against each other until only one winner is left การแข่งขัน
hang up your gloves – to retire from boxing แขวนนวม