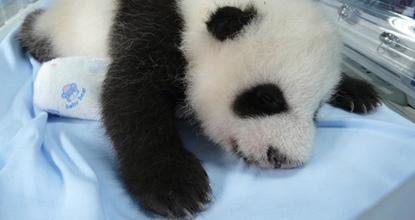 That cute little panda that captured the hearts of Thais throughout the country when it was born in the Chiang Mai Zoo in 2009 is no longer little and not quite so cute, but news that she is about to leave for China will still sadden many people here. 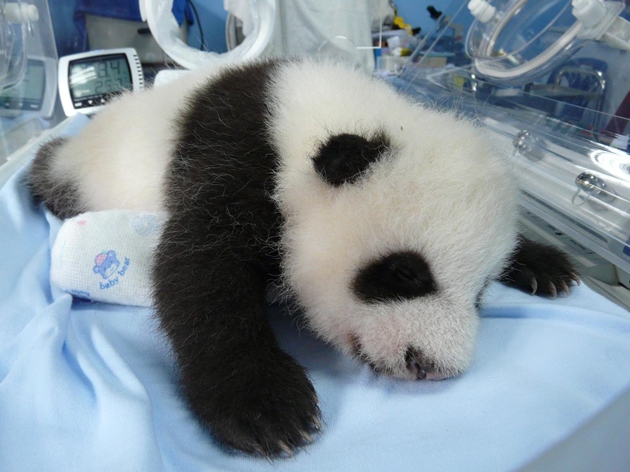 Lin Ping in a photo taken shortly after her birth is 2009, an image that millions of Thais still have in their minds. Bangkok Post file photo.

That cute little panda that captured the hearts of Thais throughout the country when it was born in the Chiang Mai Zoo in 2009 is no longer little and not quite so cute.

Thus, news that Lin Ping is to be returned to China after she turns four years old on May 27 is not as devastating as it would have been two or three years ago. 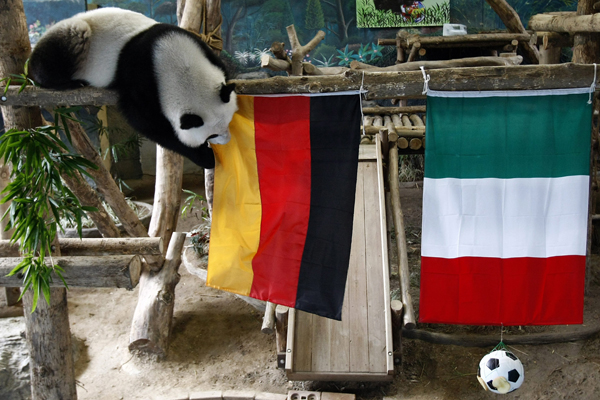 A much bigger Lin Ping catches the German flag as she predicts Germany to win the semi-final match against Italy of the Euro 2012 soccer championships, during a soccer promotion at Chiang Mai Zoo on 27 June 2012. (EPA Photo)

Still, the country will be saddened when the Chinese reclaim the young panda. Thanin Suphasaen, Chiang Mai governor, said the Thai team had tried but was unable to negotiate an extension of the loan that has kept Lin Ping in Chiang Mai since birth.

Lin Ping was born to Chuang Chuang and Lin Hui, two pandas which were loaned from China on a ten-year contract in 2003.

Under the contract, any offspring born to the pandas belong to Chinese authorities.

China previously granted Chiang Mai Zoo permission to keep the cub for four years, but has now signalled it will seek its return.

The loan period for Lin Ping's parents ends in October, but the zoo is likely to push for an extension.

Lin Ping's birth was a huge event in Thailand, receiving heavy media coverage. A postcard naming contest was organised and more than 20 million votes were received with "Lin Ping" an easy winner.

In Chinese, Lin Ping means ‘‘forest of ice’’. In Thai, the name means Ping River, the river which runs through Chiang Mai.

Chiang Mai Zoo will organise the farewell party for Lin Ping in May, about a week before her expected departure. Thai Airways International is working on the transportation arrangements for Lin Ping, who has become a household name.

Many people have watched the young panda grow. A cable television channel showed live pictures of her daily for about three years after her birth.

Since the two parent pandas arrived Thailand in 2003, the zoo has earned over 200 million baht from entry tickets to the panda enclosure. The fee is 50 baht for an adult and 20 baht for a child.

Adapted from a story in today’s Bangkok Post and from bangkokpost.com

image – a photograph, painting, or other work of art that represents a person or thing รูปภาพ
devastating – upsetting or shocking   ทำให้สะเทือนใจ
predict – to say that an event or action will happen in the future, especially as a result of knowledge or experience คาดการณ์ว่า พยากรณ์จากสถิติว่า
reclaim – to take back something that was yours เรียกกลับคืน, เอากลับ
negotiate – to try to reach an agreement by discussing something in a formal way เจรจาต่อรอง
extension – making a period of time longer  การขยายออกไป
loan – something that a person, business, or country borrows, and which must be paid or given back การให้ยืม
contract – an official written agreement สัญญา
offspring – the baby or babies of an animal; someone’s child or children ลูกสัตว์,ทายาท,บุตร,ผู้สืบเชื้อสาย, ลูกสัตว์
authorities – people who have the power to make decisions or enforce the law เจ้าหน้าที่ผู้มีอำนาจ
grant permission – to officially allow someone to do something อนุญาต,อนุมัต, ยินยอม
signal – to be a sign that something exists or is likely to happen ส่งสัญญาณ
media – radio, television, newspaper, the Internet, considered as a group สื่อ
coverage – the reporting of news and sport in newspapers and on the radio and television การรายงานข่าว
farewell – saying goodbye to someone when you do not expect to see them again for a long time การกล่าวลา, การลาจาก
departure – leaving การออกจาก
arrangement – a plan or preparation that you make so that something can happen การจัดการ
household name – a person, or in this case, an animal, who is very well known in a particular area
live – happening now, i.e., not recorded earlier ถ่ายทอดสด
enclosure – a piece of land that is surrounded by a fence or wall and is used for a particular purpose  สังเวียน, การกั้นรั้วล้อม, กรง
fee – an amount of money that you pay to be allowed to do something ค่าธรรมเนียม
adult – a fully grown person who is legally responsible for their actions  ผู้ใหญ่