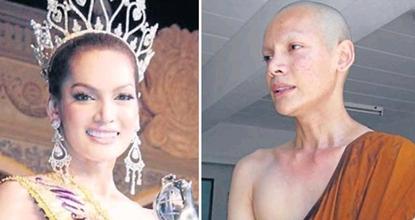 No longer a transsexual beauty queen, Jazz, now "100 per cent male," has become a monk. 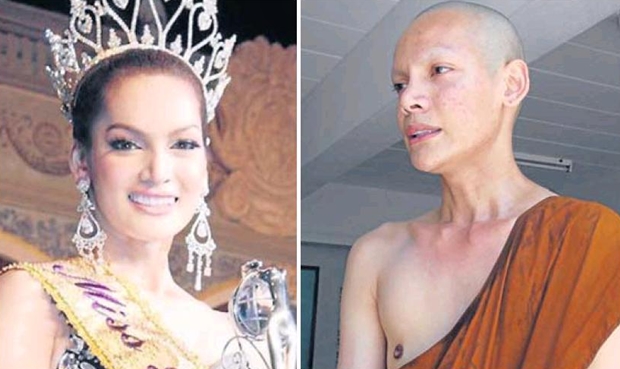 In Thailand, only males can become Buddhist monks.

Thus, it was more than a little surprising to most people  when news came out that the winner of the transsexual Miss Tiffany Universe 2009 contest, Sorrawee ‘‘Jazz’’ Nattee, had entered the monkhood on Sunday at a temple in southern Songkhla province.

While technically a man, Jazz had lived as a woman for much of his adult life.

His family says, however, that while Jazz had had breast implants, he never underwent transgender surgery. Removal of the implants have returned him to his original male gender.

‘‘I want to be a monk for the rest of my life and I’m ready to leave my worldly possessions behind,’’ Jazz said after becoming a monk at Wat Liab in his home province.

‘‘It’s not that I’ve become a monk to run away from problems, but I’ve studied dhamma for two years and now know what it truly is.’’

The monk, whose ordination name is Phra Maha Viriyo Bhikku, which means one who is diligent, said he took part in the transsexual beauty contest four years ago because his parents urged him to.

He added that he also wanted to enter the monkhood to repay his parents.

The abbot of Wat Liab said Jazz did not conceal the fact that he participated in the Miss Tiffany beauty contest.

‘‘Jazz is 100 per cent man, both emotionally and physically,’’ the abbot said.

Adapted from a story in today's Bangkok Post by Wichayant Boonchote

pose – to stay in a particular position in order to be photographed วางท่าถ่ายรูป
reporter – someone whose job is to write articles or make broadcasts about events in the news ผู้สื่อข่าว, นักข่าว
male – belonging to the sex that does not give birth to babies เพศชาย, เพศผู้, ผู้ชาย
transsexual – a person who feels emotionally that they want to live, dress, etc. as a member of the opposite sex ผู้มีจิตใจเหมือนเพศตรงข้าม
technically – according to an exact understanding of rules, facts, etc.
adult – a fully grown person who is legally responsible for their actions  ผู้ใหญ่
breast – either of the two round soft parts at the front of a woman's body that produce milk when she has had a baby หน้าอก
implant – something that is put into a person's body in a medical operation สิ่งฝัง, วัสดุฝัง
transgender – relating to transsexuals and transvestites คนข้ามเพศ, คนที่แสดงออก หรือแต่งกาย หรือผ่านการผ่าตัดเพื่อเปลี่ยนเป็นเพศตรงข้าม
surgery – medical treatment in which a doctor cuts open someone’s body การทำศัลยกรรม
removal – taking something away การเอาออก
original – existing at the beginning of a particular period, process or activity เดิม
gender – the fact of being either male or female เพศ
possession – something owned ทรัพย์สมบัติ
dhamma – the truth as taught by the Buddha ธรรมะ
ordination – the act or ceremony of making someone a monk, priest or other religious leader การบวช, พิธีบวช
diligent – showing care and effort in your work or duties ขยัน
urge – to advise someone very strongly about what action or attitude they should take ผลักดัน, กระตุ้น
abbot – the head monk at a temple เจ้าอาวาส
conceal – to hide something  ซุก ซ่อน
participate – to take part in something เข้าร่วม
emotionally – connected with people's feelings เกี่ยวกับความรู้สึก, เกี่ยวกับอารมณ์
physically – in a way that is connected with a person's body rather than their mind ด้านร่างกาย,  เกี่ยวกับร่างกาย