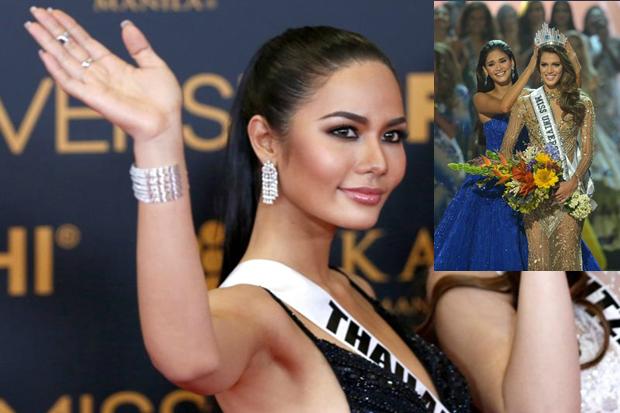 The final round of the Miss Universe Pageant has finished and Miss Thailand, Chalita "Namtan" Suansane, made it all the way to the final six before being eliminated. The winner this year is Miss France.

Thai fans were kept on the edge of their seats as Miss Universe pageant presenter Steve Harvey began reading out the names of the 13 finalist. First came Kenya, then Indonesia, followed by Mexico, USA, Peru, Colombia, the Philippines, Canada, Brazil, France, and Haiti. With one finalist to go, Thai fans finally heard what they had hope for: "Miss Thailand".

The announcement for the final 9 was much less tense as "Namtan" was the second qualifier announced. Next came the final six and once again she stood among the finalists. But that is as far as she was able to go, leaving Miss France, Miss Colombia and Miss Haiti in the final 3.

9:58   Miss France has just been annouced as the new Miss Universe. 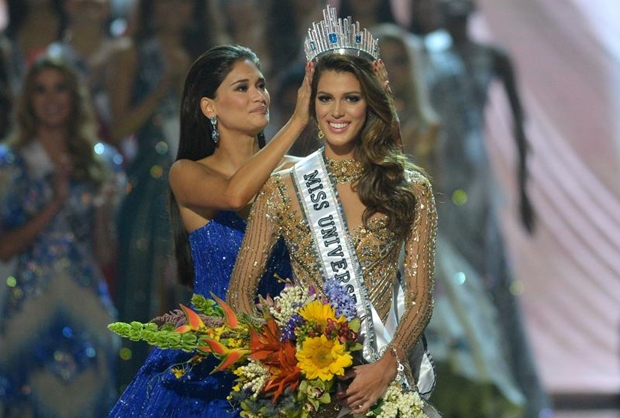 Miss Universe contestant Iris Mittenaere (R) of France is crowned the new 2017 winner by former Miss Universe Pia Wurtzbach of the Philippines (L) during the Miss Universe pageant at the Mall of Asia Arena in Manila on January 30, 2017. / AFP PHOTO / TED ALJIBE

AFP – Miss France was crowed Miss Universe on Monday in a made-for-television spectacle free of last year's dramatic mix-up but with a dash of political controversy as the finalists spoke out on the refugee crisis and other hot-button global issues.

Iris Mittenaere, a dental surgery student from Lille in the north of France, beat 85 of the world's most beautiful women at the event in the Philippines scheduled for primetime viewing in the United States.

In the final question round, Miss France highlighted the benefits of open borders when asked about the global refugee crisis.

"Having open borders allows us to travel more through the world and to find out more about what's out there in the world." 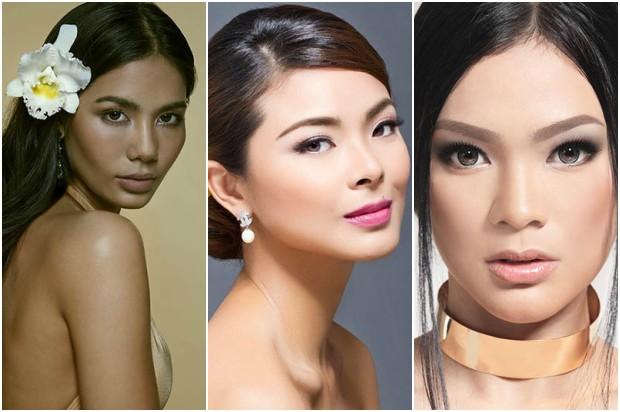 (From left) Chalita "Namtan" Suansane of Thailand, Maxine Medina of the Philippines and Kezia Warouw of Indonesia. (Miss Universe website)

Thais, Filipinos and Indonesians have been casting their votes by the millions for their Miss Universe favourites in online polls and on mobile apps.

While the final round of the Miss Universe pageant is not until Sunday night, the race is on, with Thais, Filipinos and Indonesians by the millions casting their votes for their favourites in online polls and on mobile apps.

The winners will be guaranteed a place among the top 12 in the final round on Sunday.

According to unofficial voting results at 8.49pm, Maxine Medina, the Filipina beauty, emerged as the online winner with 39.98 million votes, followed by Chalita "Namtan" Suansane of Thailand (39.97 million) and Kezia Warouw of Indonesia (34.59 million) in a poll at the official Miss Universe website, which closed at 8pm on Saturday.

Not surprisingly, the #Philippines hashtag trended worldwide at 8.46pm on Saturday.

Fans 13 years or older may vote 10 times per day per account at the Miss Universe website, through the Vodi and Miss U apps, or on Twitter using #MissUniverse #(country) hashtags.

Efforts to mobilise votes for the Thai contender were also intense, with operators offering gifts for people who retweet them.

Live voting begins at 7am Bangkok time on Monday through the Miss U and Vodi apps, vote.missuniverse.com and Twitter with the hashtag #MissUniverse and #(country).

It looks like Miss Thailand has some strong competition from our region: 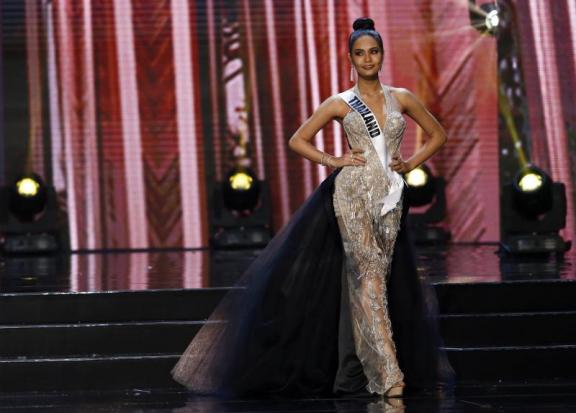 Miss Universe candidate Chalita Suansane walks on stage in her evening gown during the Miss Universe preliminary show at the Mall of Asia Arena in Pasay City, south of Manila, on Thursday. (EPA photo) 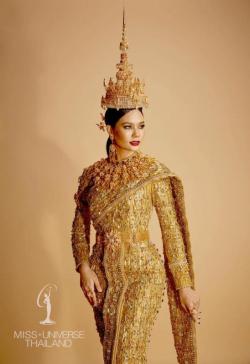 A deputy government spokesman has urged Thai people to vote for Chalita "Nong Namtan" Suansane as a way to support her being crowned Miss Universe 2016.

Deputy government spokesman Werachon Sukhondhapatipak posted his comments on Facebook, calling on the public to support and vote for Ms Chalita, who is representing Thailand at the 65th Miss Universe pageant.

"Thai people, please help vote for her. She is very beautiful. We are one of the superpowers of social media," he wrote.

Ms Chalita has gained huge popularity on social media, with many people believing she could become the country's third Miss Universe winner after Apasra Hongsakula in 1965 and Porntip Nakhirunkanok in 1988.

A clip featuring Ms Chalita introducing herself, released on the social network by the organiser of the contest earlier, had also received one million views as of yesterday.

Click "play" to listen to Miss Thailand finishes in top six as Miss France is the new Miss Universe (Updated) and "Download" to keep this file for educational purpose.

benefit : an advantage you get from a situation; a helpful or good effect, or something intended to help - ผลประโยชน์, ข้อได้เปรียบ, ผลดี

candidate (noun): a person or group that is considered suitable for something or that is likely to get something or to be something - ผู้สมัคร, ผู้ท้าชิง, ผู้แข่งขั

cash : money in the form of notes or coins - เงินสด

cast a vote : to vote - ลงคะแนน

contender : someone who competes with other people for a prize or job - คู่ต่อสู้, คู่แข่ง

controversy : a disagreement, especially about a public policy or a moral issue that a lot of people have strong feelings about - ความขัดแย้ง

crown : to give someone the position of being a winner in a competition - ให้ตำแหน่งแชมป์

dash (noun): a small amount of something that is added to something else - ปริมาณน้อย ๆ ที่ผสมเข้าสิ่งอื่น

diverse (adjective): many different kinds of things or persons - หลากหลาย

draw : a way of choosing something such as a name or number by chance - การจับฉลาก

edge out : to beat someone in an election or a competition by a small amount - เฉือนชนะ ชนะอย่างหวุดหวิด

finalist : a person who takes part in the final of a game or competition - ผู้เข้ารอบสุดท้าย,ผู้แข่งขันที่เข้ารอบสุดท้าย

global : known throughout the world - ระดับโลก

globalisation (noun): the idea that the world is developing a single economy and culture as a result of improved technology and communications - โลกาภิวัตน์, โลกานุวัตร, การแพร่หลายไปทั่วโลก

gown : a woman's dress, especially a long one for special occasions - เสื้อคลุม

hashtag : a word or a phrase with a "#" before it, that marks something as belonging to a certain category or relevant -

hot-button issue (idiom): a matter that cause strong disagreement among people -

microbiology : the study of microorganisms - จุลชีววิทยา

mix-up (noun): a mistake or problem that happens because someone is confused about details - สถานการณ์สับสนวุ่นวาย (เพราะตัดสินใจหรือทำผิดพลาด)

native : someone who was born in a particular place - ชาวพื้นเมือง

neighbour : someone (or towns, cities, countries) who lives or is located near you - เพื่อนบ้าน

official : done by people in authority or decided by the government; announced publicly - เป็นทางการ

on the edge of your seat (idiom): very nervous and excited -

pageant : a competition to choose the most beautiful from a group of women - ประกวดนางงาม

popularity : a situation in which someone or something is liked by many people - ความเป็นที่นิยม, ความเป็นที่ชื่นชอบ

power bank : the little rechargeable batteries that can be attached to a phone when it runs out of battery -

prawn (noun): a shellfish with ten legs and a long tail, that can be eaten. - กุ้ง

preliminary : an early part of a competition happening before the finals; an event or action that introduces or prepares for something else - ขั้นต้น, ขั้นแรก

presenter : a person who introduces the different sections of a radio or television programme or promotes a product - ผู้นำเสนอ

ranging from : including a variety of different things in addition to those mentioned - ขยายออก, แบ่งประเภท

refugee : someone who leaves their country or living place, especially during a war or other threatening event - ผู้ลี้ภัย

release : to allow something to be shown or known to the public or to be available for use - เปิดเผย, ปล่อยข่าว

round : one of a series of events, activities, etc. - รอบ

spectacle : an exciting and impressive public event or performance; an unusual, exciting, or impressive event or sight - การแสดงต่อหน้าสาธารณชน,การแสดง

trend (verb): to be discussed a lot on a social media website - ถูกกล่าวถึงมากในเว็บไซต์สื่อโซ'เชิล (เครือข่ายสังคมออนไลน์)

unofficial (adj.): not having been proven or approved by anyone in authority - ไม่เป็นทางการ