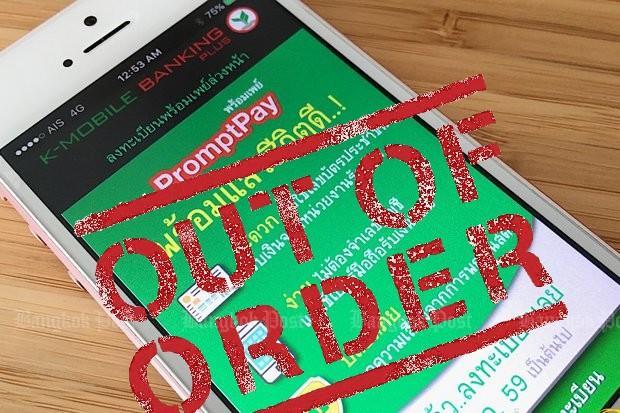 PromptPay, heavily promoted by the government and the Thai Bankers Association despite criticism over its security protocols, crashed on Sunday because it couldn't handle a simple date rollover to 2018.

Users of the national e-payment system, PromptPay, were left frustrated on Sunday when computer glitches left them unable to access their cash for about eight hours.

It was not the best time of the year for the money transfer service to go down. The disruption was reported as early as 7am and affected transactions between banks only, according to Somkid Jiranuntarat chairman of Information Technology Club of the Thai Bankers Association (TBA).

PromptPay users complained the money transfer transactions were deemed to have been completed, but the recipients did not get the money. Mr Somkid said the disruption was caused by computer glitches related to the formatting of the calendar changing to 2018. The National Interbank Transaction Management and Exchange (National ITMX), a local payment network service provider, was fixing the problem.

"The recipients will receive the money when the bugs are fixed. If customers need to use cash, please contact [the sender banks] directly and they will help solve the problem on a case by case basis," he said.

Chantawan Sujaritkul, spokeswoman of Bank of Thailand, said banks guaranteed the safety of the money.

The system returned to normal at around 3pm.

Dec 31 was the last day when many were required to make payments or pay off fines, not to mention pay for new year celebrations. The online community and Facebook pages run by commercial banks were flooded with complaints. Customers were furious as they needed cash and could not get through to the banks. Some of those who did manage to get through spent several hours trying to find someone to explain what had happened.

One user complained: "I need money badly. I was able to reach a bank call centre after 90 minutes and she told me the bank would solve the problem within eight days. What the hell is the use of that?" he said.

The system failure will be seen as an embarrassment for the government who, along with the TBA, had promoted the PromptPay service heavily despite criticism over its security protocols.

Click "play" to listen to PromptPay 'Y2 18' glitch delays cash transfers and "Download" to keep this file for educational purpose.

bug : a fault in a machine, especially in a computer system or program - ความบกพร่อง, ข้อผิดพลาด

disruption : a situation in which something cannot continue because of a problem - การขัดขวาง, การหยุดชะงัก

embarrassment : a feeling of being nervous or ashamed because of what people know or think about you - ความขวยเขิน, ความกระดากอาย

flood : a large amount or number of something - จำนวนมาก

glitch : a small problem or fault that prevents something from being successful or working as well as it should - ความบกพร่องเล็กน้อย

promote : to encourage or support something - สนับสนุน

protocol : a system of fixed rules and formal behaviour - ระเบียบการ