Kingdom tops Bloomberg list for 4th year in a row

Once again, Thailand has placed last on the list of the world's most miserable countries.

Thailand has been ranked as the least miserable country out of 66 economies for a fourth consecutive year, according to Bloomberg's Misery Index for 2018.

Thailand again claimed "least miserable" status, though the nation's unique way of calculating unemployment helps give it the edge over the next least miserable, Singapore.

Venezuela marks its fourth year as the world's most miserable economy, with a score more than three times what it was in 2017.

The Bloomberg Misery Index relies on the age-old concept that low inflation and unemployment generally indicate how good an economy's residents should feel.

Sometimes, of course, a low tally can be misleading in either category: persistently low prices can be a sign of poor demand and joblessness which sinks too low shackles workers who want to switch to better jobs, for instance.

The combination of inflation and unemployment rate gives Thailand its score.

According to Bank of Thailand, the country's inflation rate was low at 0.66% last year while the unemployment rate was 1.04%.

The kingdom's unemployment rate has been remarkably low for years, ranging between 0.4 and 1.2% since 2011. According to a central bank officer, this is a result of structural factors.

The agriculture and "informal" sectors such as street vendors and motorbike taxi drivers absorb most of those labourers who lose their jobs in the formal sector.

Some have not been so fortunate. In Venezuela, hyperinflation has left many economists throwing up their hands at the actual rate of price growth.

At the other end of the spectrum, Mexico has made the most progress this year, moving 16 notches toward "least miserable" as economists remain optimistic the central bank will be able to control last year's bout of high inflation. 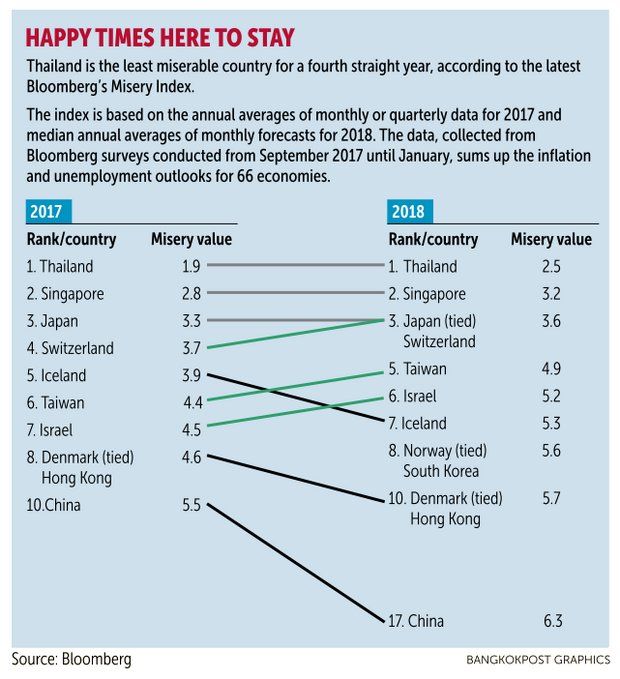