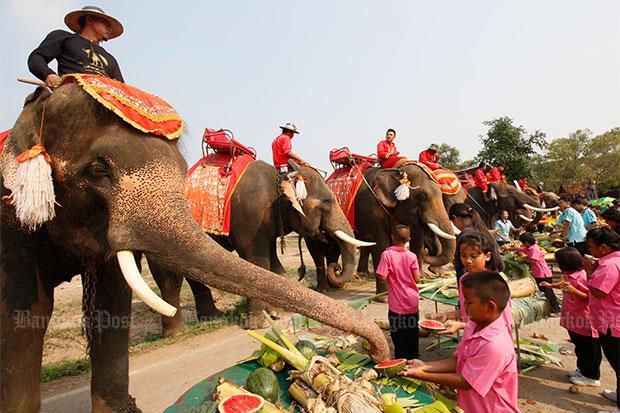 A banquet of fresh fruit and vegetables is enjoyed by 70 elephants at Ayutthaya Elephant Kraal in Ayutthaya province on Tuesday. (Photo by Sunthorn Pongpao)

Merit-making ceremonies and buffet feasts were on order for elephants in several provinces on Tuesday to mark Thai Elephant Day.

In Surin province, a traditional ceremony was held at the Prakam spirit shrine of the Elephant Study Centre in  Ban Ta Klang, known as the elephant village, in Tha Tum district, followed by other activities for elephants.

A banquet of fresh fruit and vegetables spread out along 200 metres was enjoyed by 100 elephants.

In Chon Buri, a merit-making ceremony was held for elephants at Nong Nooch Tropical Botanical Garden in Pattaya.

Nine Buddhist monks performed religious rites and sprayed holy water on 87 jumbos, and a buffet of fruit was spread out for their enjoyment.

In Ayutthaya, a religious ceremony and a banquet were arranged at the Ayutthaya Elephant Kraal. Seventy elephants enjoyed the fruit and vegetables, with many adults and children taking part in organised activities.

Thai Elephant Day is celebrated every year on March 13.

A Buddhist monk feeds an elephant at the kraal in Ayutthaya. (Photo by Sunthorn Pongpao) 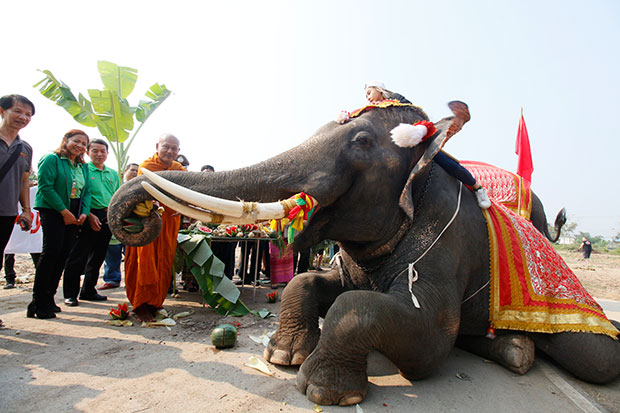 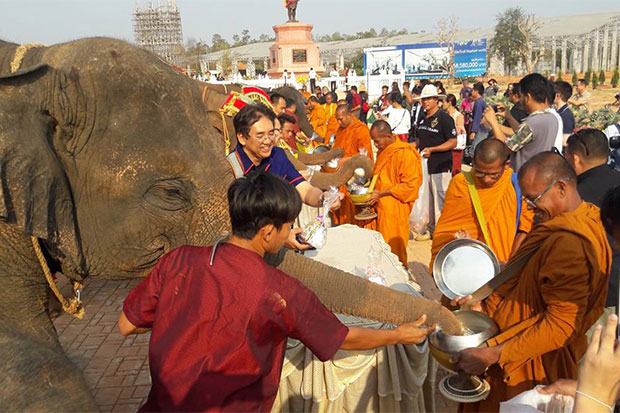 Click "play" to listen to Buffets for jumbos on Thai Elephant Day and "Download" to keep this file for educational purpose.

banquet : a formal meal for a large number of people, usually for a special occasion, at which speeches are often made - งานเลี้ยง, งานรื่นเริง

buffet : in a restaurant when food is arranged so that customers can come and put the plate themselves, usually as much as they can eat -

holy : important in a moral and religious way - ศักดิ์สิทธิ์

shrine : a place for worship which is holy because of a connection with a holy person or object - สถานที่บูชา