Vorayuth Yoovidhya, a suspect in a hit-and-run case, is brought to the Police General Hospital to undergo a blood test on Sept 4, 2012.

The “Red Notice” for Red Bull heir Vorayuth "Boss" Yoovidhya, wanted in Thailand in relation to a hit-and-run incident in 2012, has disappeared from the Interpol website.

It was unclear when the notice -- a worldwide request to find and arrest an individual pending an extradition -- went missing from the website and for what reasons. But there was immediate speculation that powerful interests had intervened on Mr Vorayuth's behalf.

Before dawn on Sept 3, 2012, a black Ferrari driven by Mr Vorayuth slammed into a policeman on motorcycle, dragging his mangled body along Sukhumvit Road, before speeding away. 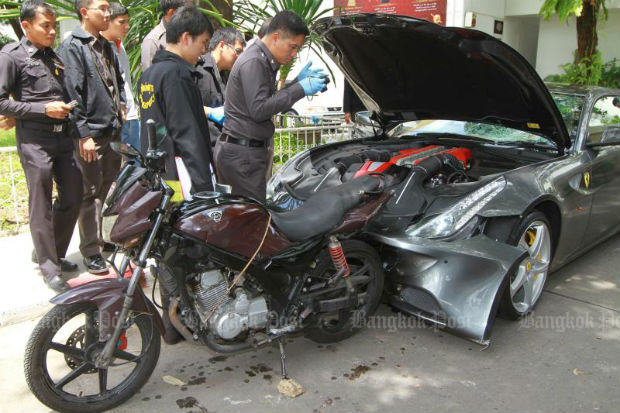 Interpol declined to discuss individual cases but told the Bangkok Post that generally a notice could be lifted if “the suspect has been arrested and extradited or died, the country which requested it has withdrawn its request, the judicial authorities in the country behind the notice have withdrawn the national arrest warrant against a suspect, the notice is the subject of an appeal, or the notice has been cancelled or the status of the notice has changed from public to restricted.”

Thai police said in late August that the international police network had issued the red notice for Vorayuth, now 33, after he repeatedly failed to meet with prosecutors. The notice was on the Interpol website until recently.

Thai police spokesman Krissana Pattanachareon said on Thursday that Thai police had no idea why the notice was no longer there. 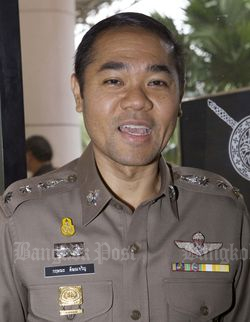 “It's entirely up to Interpol. We can’t intervene because each country has different laws,” he said.

Pol Col Krissana confirmed that Thai police had not sought a change from "public" to "restricted" status for the notice.

“Thai police did all they could to bring the suspect to justice. We stated clearly that all member countries should tell us if they find him.”

He added that this was standard practice for such cases. “Police use the same standard in the prosecution. We also told England in writing that the suspect might be hiding there but so far the UK police have not replied.

Following the hit-and-run, Mr Vorayuth delayed hearing the charges seven times, citing various reasons. It was not until April 27 last year that prosecutors finally charged him with reckless driving causing death and failing to help a crash victim.

The government cancelled his passport after he flew out of Thailand on his private plane two days before he was due to face the charges.

The speeding charge was dropped as its one-year statute of limitations had expired.

The second charge -- failing to stop his car to help a crash victim -- expired on Sept 3 last year.

The third and most serious charge of reckless driving causing death will remain pending until 2027.