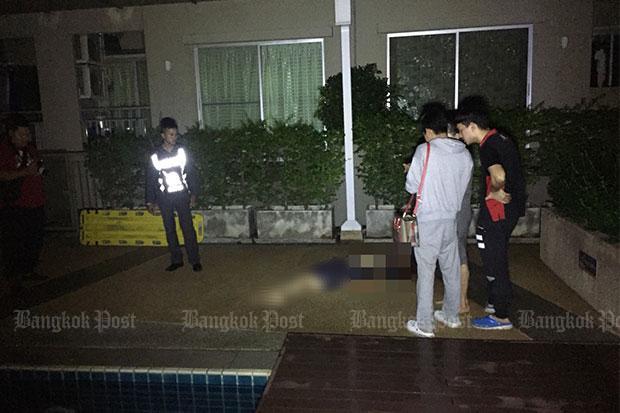 A police officer and rescue workers with the body of a British man killed by a fall from his room on the 18th floor of a condominium in Pattaya beach town of Chon Buri in the early hours of Wednesday.

A British man fell to his death from his room on the 18th floor of a Pattaya condominium building in the early hours of Wednesday.

The body of the 68-year-old, whose name was withheld pending notification of relatives, was lying on the mezzanine on the 5th floor of Lumpini Ville Naklua in Bang Lamung district when police arrived at the scene after being alerted at about 1am on Wednesday.

Naritha Daosri, 49, the man’s Thai lover, was crying beside the body. She told police that she went out that evening to rent a vehicle to take him to court to divorce his wife. When she returned to the room on the 18th floor he was not there and she became worried.

Over the last few days she had noticed him often looking down at the ground from the balcony.

She immediately checked the balcony and saw him lying below. She went down to the mezzanine on the 5th floor and found him unconscious and bleeding profusely.

After inspecting the scene and gathering evidence, police sent his body to the Police General Hospital’s Institute of Forensic Medicine for a post-mortem examination to confirm the cause of death.

Their early assumption was the man had committed suicide due to mounting emotional turmoil.

Click "play" to listen to Briton falls to death from Pattaya condo and "Download" to keep this file for educational purpose.

alert : to tell someone in authority about a danger or problem so that they can deal with it - เตือนให้ระวัง

mezzanine (noun): a floor that is built between two floors of a building and is smaller than the other floors - ระเบียงที่ยื่นออกมาระหว่างชั้นหนึ่งกับชั้นสองของตัวตึก

notification (noun): the act of giving or receiving official information about something - การแจ้ง

unconscious  : in a sleeplike condition, usually from an illness or injury - หมดสติ