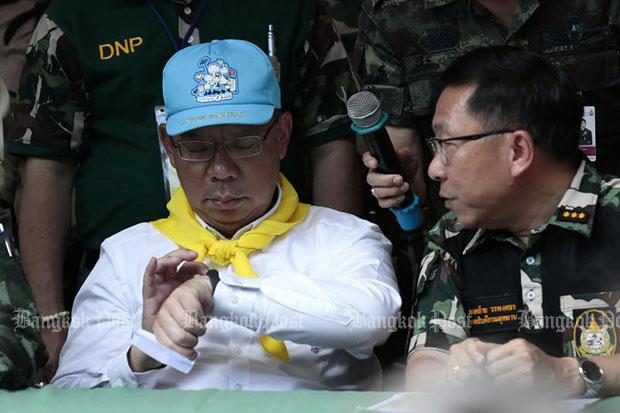 The man in charge of the rescue of the trapped footballers in Chiang Rai is among a group of 11 provincial governors whose transfers to other positions were published in the Royal Gazette on Wednesday.

Narongsak Osotthanakorn, governor of Chiang Rai, has been moved to neighbouring Phayao.

The transfer is not seen as a promotion as Chiang Rai is a bigger and more important province.

However, Interior Minister Anupong Paojinda ordered that Mr Narongsak remain in charge of the operation to save the 13 lives inside flooded Tham Luang cave until it is completed.

Eleven governors and a deputy permanent secretary for the interior have been assigned to new positions, effective from June 29.

The transfers were approved by the cabinet on April 24, but it did not take effect until the names were endorsed by His Majesty the King, announced on Tuesday, and published in the Royal Gazette on Wednesday.

The reason behind Mr Narongsak's transfer was not announced when the Interior Ministry proposed the 12-name list to the cabinet.

Mr Narongsak has been Chiang Rai governor since April 2017 and he withheld approval for several projects, including the 32-million-baht construction of a Phaya Mung Rai statue on an island in the Kok River, during his tenure.

The governor said in March that the budget funds for the statue's construction proposed by Chiang Mai Municipality, and other schemes suspected of corruption, should instead be spent on other, necessary,  infrastructure improvements. The proposed statue encroached on the river and had legal problems, he said.

"I will never approve any projects which pose legal questions. I would be better transferred to another place where there are fewer headaches," he said at the time.

Mr Narongsak has been praised for his leadership and decisiveness since being assigned to lead the rescue operation at Tham Luang in Mae Sai district, Chiang Rai, after 12 young footballers and their trainer ventured into the cave on June 23 and did not return.

Prime Minister Prayut Chan-o-cha said on Tuesday that Mr Narongsak's transfer was routine at the ministry.

"I admire him and his work. It was a routine transfer at the Interior Ministry and the decision had been made earlier," the prime minister said. "He has no problems in doing his duty."

Srisuwan Janya, secretary-general of the Thai Constitution Protection Association, on Wednesday urged the prime minister to reconsider the transfer of Mr Narongsak due to his performance in the operation. His strong opposition to some projects in the province with suspicious spending was the reason behind the transfer, according to the political activist.

Click "play" to listen to Cave rescue governor shuffled to Phayao and "Download" to keep this file for educational purpose.

encroached : to gradually cover more and more of an area of land - บุกรุก, ล่วงล้ำ

headache : a person or thing that causes worry or trouble - ปัญหา

infrastructure : a set of systems within a place or organisation that affect how well it operates, e.g., the telephone and transport systems in a country or the system of train tracks that a railway uses - สาธารณูปโภค

routine : ordinary and not interesting or special; usual and not done for any special reason - ตามปกติ

suspicious : making you believe that something is wrong, dangerous or illegal - น่าสงสัย